Home » Lifestyle » Eczema sufferer: ‘Why I love the ‘flowers’ on my skin’

Psoriasis sufferer, 22, who was once so ‘disgusted’ by how her body looked she used to change clothes five times-a-day reveals she’s learned to love the ‘meadow of flowers’ that cover her skin

A woman who says bullies caused her psoriasis is using social media to show she’s made peace with her skin condition – and empower others to do the same.

Georgia Harris, 22, from Driffield in Yorkshire, is convinced that constant bullying at school when she was a young teenager triggered the red patchy skin that repulsed her so much she hid it under baggy clothing for years.

Now though, Georgia says she’s ready to celebrate the ‘meadow of flowers’ that ‘bloom’ on her skin and regularly posts stylish photos of her condition on Instagram to help boost the body confidence of others with the condition.

Georgia, an aspiring actor and model, explains how naming the red patches has helped her embrace the condition, saying: ‘Some people call theirs “cheetah spots”, mine are my “meadow of flowers”‘. 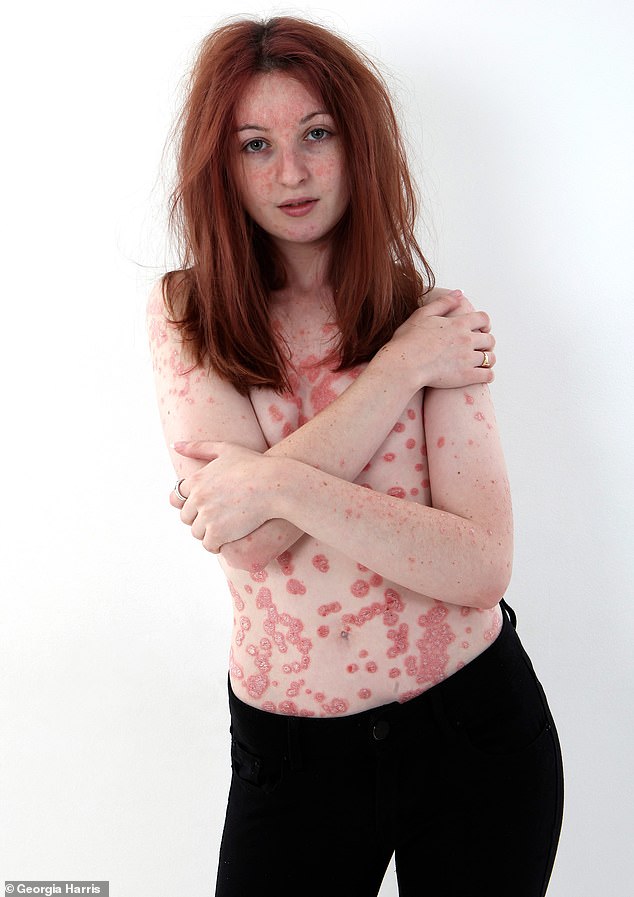 Aspiring actor and model Georgia Harris, 22, from Driffield, Yorkshire, says she believes that bullying at school caused her eczema but that in her twenties she’s making peace with the skin condition that blighted her teenage years 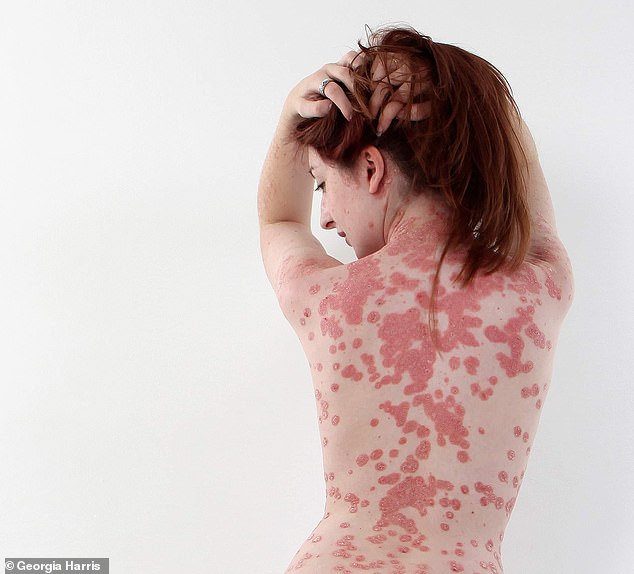 Posting under the Instagram account meadowofflowers, Georgia regularly uploads photos of her skin condition and refers to the inflamed red marks as ‘flowers’ after a friend described her skin as blooming, something that she says has changed the way she sees herself

She adds: ‘Psoriasis can be different for everyone, but for me, they show up as large, red circular patches all over my body.

Georgia says that the meadow of flowers name came from a friend, who told her: ‘you know your skin looks like a lovely meadow. Like flowers coming into bloom.’

It was a lightbulb moment and one that saw Georgia begin to look at her ‘skin in a totally different way.’

However, Georgia hasn’t always been this confident, thanks to years of bullying at school that started when she was just nine.

She explains: ‘I was a very quiet person. I worked hard, and I think the bullies hated that. They’d pick on my appearance and call me ugly.

‘I’d have chairs pushed into the back of my legs, things thrown at me, and then I’d get home and I’d be called names from anonymous numbers on my voicemail.’

The loss of a close friend meant that, by the age of 12, she had become depressed and started seeing a therapist at aged 13.

She explains: ‘I was sad a lot of the time. I didn’t care about anything and I stopped washing my hair for a while, or wearing deodorant. I wasn’t looking after myself. Of course, that made the bullying worse.

‘I spent a lot of the time crying to my mum, begging her to homeschool me.’ 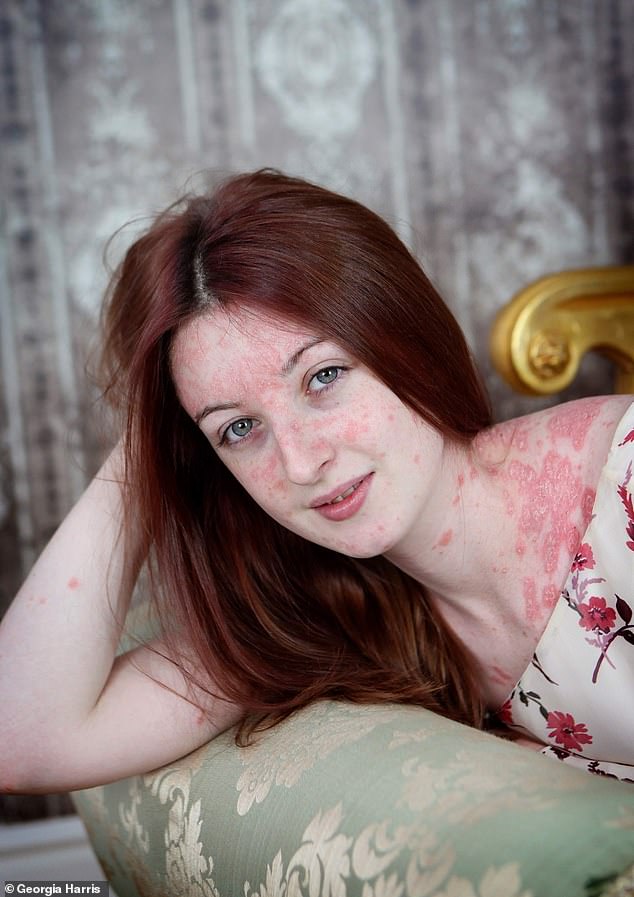 After relentless bullying at school, Georgia became depressed and began seeing a therapist in her early teens, her skin condition began to develop when she was 15 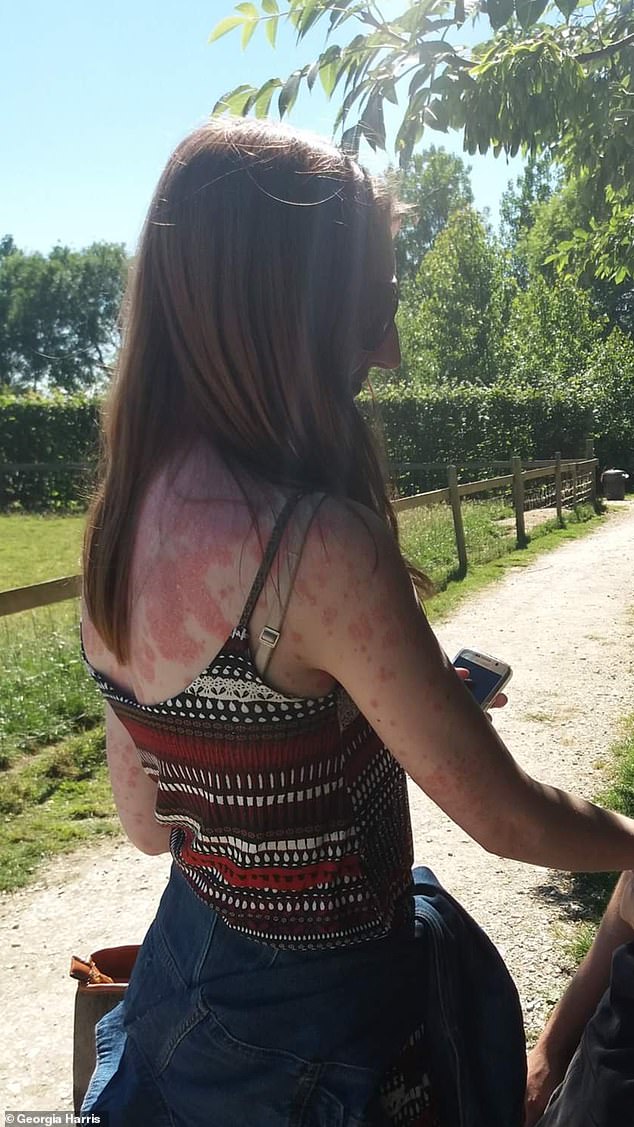 At 15, a small patch of dry skin behind her ear was diagnosed as psoriasis, which quickly spread across most of her body

When she was 15, Georgia was walking to class and felt something in her ear, that felt like a lump of excess shampoo from the shower.

She went to a doctor, who diagnosed psoriasis, and found it had spread along her ear canal.

Within days, she’d started to develop large red patches on her face, chest and elbows, before it was covering most of her body.

Georgia is convinced the stress of bullying caused her skin condition, which for years, she tried to hide with make-up and baggy clothes.

‘I’d have periods when my skin was reasonably clear, but when I started my first year of college, it was the worst it had ever been,’ said Georgia.

‘When I have a really bad flare-up, it usually starts on my back, and then most of my body is covered in sore, itchy, bright red patches.

‘I wake up in the morning and feel the skin on my arms and legs crack. The psoriasis covers my face and scalp and makes it itch, and it even causes some of my hair to fall out.’

Georgia’s dermatologist suggested she stop wearing make-up, which she’d been using to try and cover her skin, so she began staying in bed rather than go outside without it.

She said: ‘I hated how I looked. I felt disgusting and would change my clothes five times a day or re-do my make-up constantly, even though I knew it was making my skin worse.’

One day, her partner Matt suggested she have some professional portfolio photography taken while her skin was in a flare-up. ‘I said to him – look at my skin! Absolutely not!

‘I’d spent years thinking my psoriasis was something to be ashamed of, not something I should put on show to the world.

‘There was no way I could have imagined myself being confident enough to be photographed, after years of covering my skin in make-up and baggy cardigans. 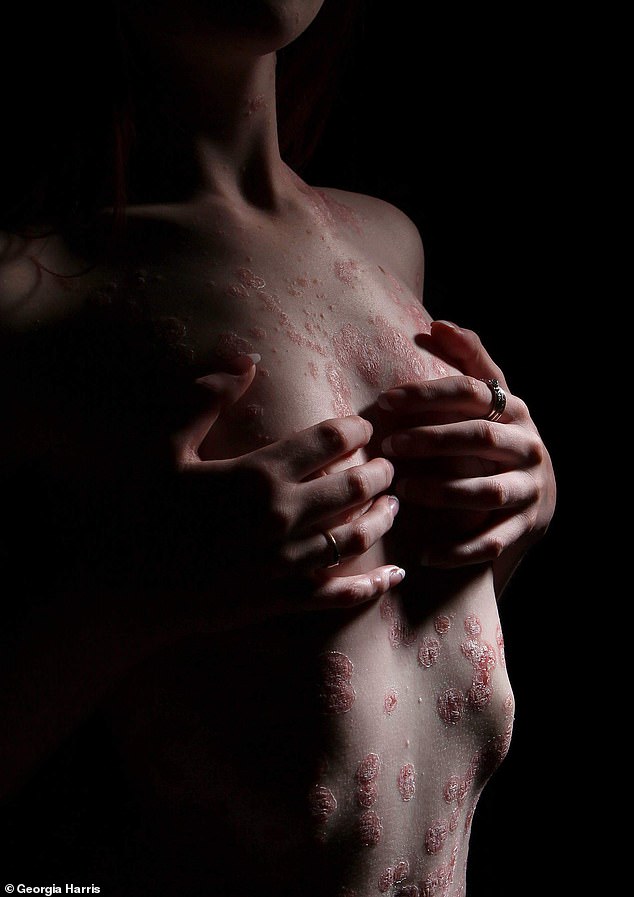 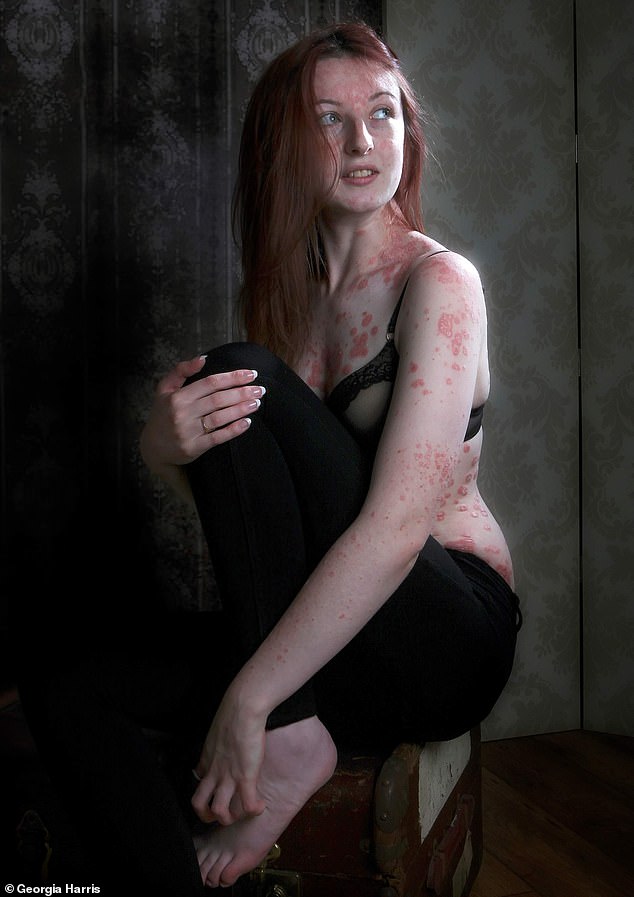 Now, she hopes that sharing images of her body – when her skin flares up and during less active times – will help others to feel body confident 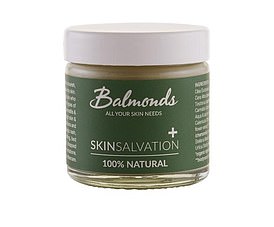 ‘But Matt suggested that the thing that had caused me so much anxiety could actually become something positive. Nobody else has skin exactly like mine and that’s something to celebrate.’

Georgia had always wanted some semi-nude photography for her portfolio, and with Matt by her side, she found the confidence to bare her skin for the first time for a series of tasteful shots.

And she’s now dealing with her psoriasis with body confidence and uses the social media platform to share positivity in a bid to help others.

‘There’s a really big psoriasis community on social media and we all help each other out,’ said Georgia, who thinks celebrities like Kim Kardashian and Cara Delevingne, who have spoken about their psoriasis, are helping to break stereotypes around what it means to have perfect skin.

Now Georgia is living with her psoriasis, and has found ways to deal with it, rather than spending every day wishing it away.

She’s determined not to use steroids and instead has found success with sessions of phototherapy, also known as light therapy, which uses UV light for skin conditions such as psoriasis and severe eczema.

To manage the condition day-to-day, Georgia swears by a moisturiser called Skin Salvation, by natural skincare brand Balmonds, based in Brighton.

Skin Salvation was created by a mum desperate for a solution when her daughter was nearly hospitalised from her bleeding eczema, and products don’t use petrochemicals, parabens, SLS, PEGs, perfumes and colours that can irritate the skin.

Georgia and boyfriend Matt, 22, who have been friends since they were 11 and together for two years, are planning their 2021 wedding.

‘People are becoming more accepting of beauty as something that comes in many guises, and that’s brilliant,’ says Georgia.

‘I’m dreaming of a beautiful dress and I’m hoping that by the time I get married, society will be in an even better place and I won’t feel pressure to look ‘perfect’ by other people’s standards.

‘I hope that if I have a flare-up on the big day, I’ll be confident enough to show it.’

Carl’s Jr.’s New Western Fries Have All The Flavors Of The Western Bacon Cheeseburger

US vaccine rollout’s next challenge: Verifying who is ‘essential’