Home » Lifestyle » Disappointing night for Australia at the Tony Awards

The creatives behind the puppet at the centre of King Kong The Musical were the only Australians to be honoured with a Tony Award at Monday's ceremony.

Sonny Tilders and his Creature Technology Company were named as recipients of a special Tony Award for their work on King Kong when nominations were announced in May. 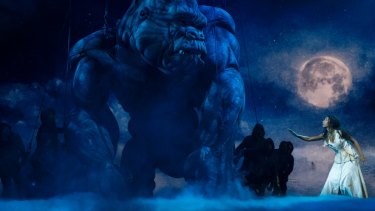 The creature in King Kong was singled out for a special Tony AwardCredit:JOAN MARCUS

But on the night, the runaway success Hadestown beat them both. Rachel Hauck's design won the Best Scenic Design of a Musical award while Anais Mitchell, who wrote Hadestown, won Best Original Score.

The show, a version of the Greek myth Orpheus and Eurydice that was originally a concept album before being adapted for the stage, was nominated for 14 awards and won eight, including the coveted Best Musical gong. It counts Best Direction of a Musical and Best Featured Actor for Andre De Shields, who played Hermes, among the honours it received on the night.

Away from Hadestown, the musical categories were a mixed bag. Santino Fontana, who plays the gender-bending role of Michael Dorsey and Dorothy Michaels in Tootsie, took home Best Male Actor in a musical, while Stefanie J Block, who plays the older version of Cher in The Cher Show, was named Best Female Actor in a Musical. 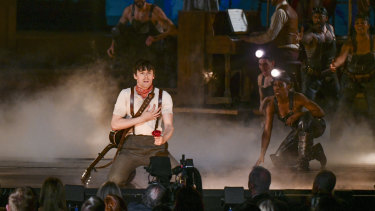 Ali Stroker, who is the first actor in a wheelchair to appear on Broadway, won best featured actress in a musical for her performance of Ado Annie in Rodgers & Hammerstein's Oklahoma! and dedicated her award to people with disabilities who had never seen themselves on stage before.

In the play categories, the Broadway transfer of the West End smash hit The Ferryman won four awards, including Best Play, Best Director for Sam Mendes and a number of technical awards.

A number of shows that earned multiple nominations including The Prom, Gary: A Sequel to Titus and Andronicus, Beetlejuice and the revival of Kiss Me, Kate failed to win any awards.

The ceremony, held at Radio City Music Hall, was hosted by late-night TV show host James Corden who took the opportunity in his opening number to highlight the advantage Broadway shows have over television shows. 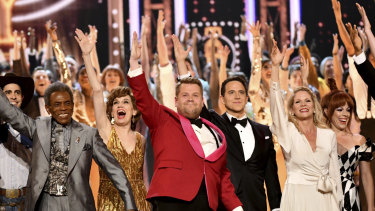 The ceremony was hosted by James Corden.Credit:Invision

Studiocanal Sells Most of World on ‘Around the World, ’ ‘Gunpowder Milkshake’ (EXCLUSIVE)