A few days ago the Prime Minister was approached in the House of Commons by one of his party grandees. ‘I wonder if you can help me with my reading of the classics,’ the MP said.

‘Of course,’ Boris answered. ‘Well,’ said his colleague, ‘it’s about Brutus. Is it true he betrayed Caesar, was then forgiven and brought back into the fold, only to then betray him again and stab him to death?’

‘Er… yes. Why do you ask?’ the perplexed PM asked. ‘Oh,’ replied the backbencher wryly, ‘It’s just you might want to think about that when it comes to Michael Gove and your reshuffle.’

Boris didn’t think about it. Or if he did, he chose to ignore the grey-bearded soothsayer’s warning of the Ides of September.

The reshuffle was literally that. An essentially random reordering of the Ministerial pack, with little clear structure or political direction.

But there was one big winner. The Minister for the sprawling new department, set to be renamed the Department for Levelling Up, Housing and Communities. 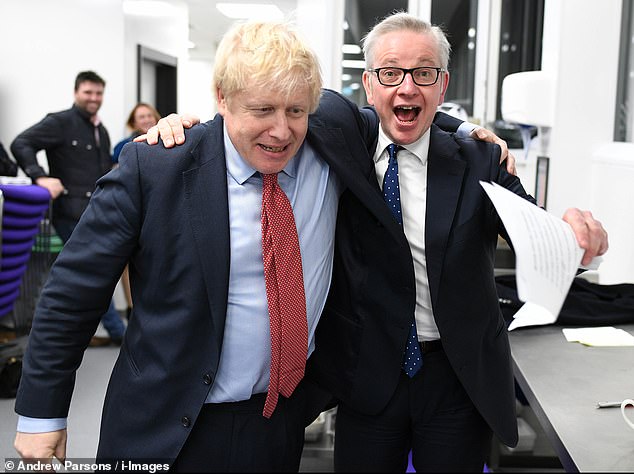 Gove now has responsibility for almost all of the key planks of the Government’s electoral agenda: delivering for the Red Wall. Neutralising Nicola Sturgeon. Reversing the backlash against planning reform. Fixing the housing crisis. Pictured: Boris Johnson and Michael Gove celebrate after the 2019 General Election

In the hours after the announcement, a number of Gove’s numerous critics wishfully attempted to spin his move as a demotion. He had been booted out of the Cabinet Office, the engine-room of Government, they claimed.

And to an extent, they were right. Gove now has responsibility for almost all of the key planks of the Government’s electoral agenda: delivering for the Red Wall. Neutralising Nicola Sturgeon. Reversing the backlash against planning reform. Fixing the housing crisis.

So it’s true, he isn’t in the engine room any more. He’s up on the bridge, with his hands firmly on the wheel.

Which is alarming even some of his fellow Cabinet Ministers. ‘Michael is the most untrustworthy man in Government,’ one of them told me. ‘He just can’t help himself. Look at how he operates. Whenever anyone gets into any sort of trouble he’ll suddenly start moving in on their patch. You’ll start reading in the papers how he’s got this great plan to fix this, or solve that, even though it’s not his brief.’

This tendency to trespass on the political territory of colleagues – then attempt to bury them six feet under it – is one of the reasons Boris opted to move him to his beefed-up department.

With its own significant Levelling Up and Shared Prosperity Fund budgets, along with more clearly delineated policy streams, the hope is it will encourage Gove to demonstrate greater self-discipline, especially as he’d admitted to allies he’d become bored and frustrated at the Cabinet Office (at least when not out dancing to hard-core techno in his native Aberdeen).

Yet suspicions within Tory ranks over his loyalty remain. Partly this is based on his long-standing relationship with Dominic Cummings, who is currently embarked on a bitter revenge mission against Boris and his inner circle.

‘Gove let the snake into the nest,’ one Tory MP told me. But the Minister insists he has broken off relations with Cummings, even going so far as to tell friends he has genuine concerns over his former advisor’s mental health.

Another problem is Gove’s perceived proximity to the so-called ‘Carrie Clique’ – the group of No 10 aides who have formed an alliance with the Prime Minister’s wife and are seen, rightly or wrongly, to exert a strong and not always healthy influence over his Government. 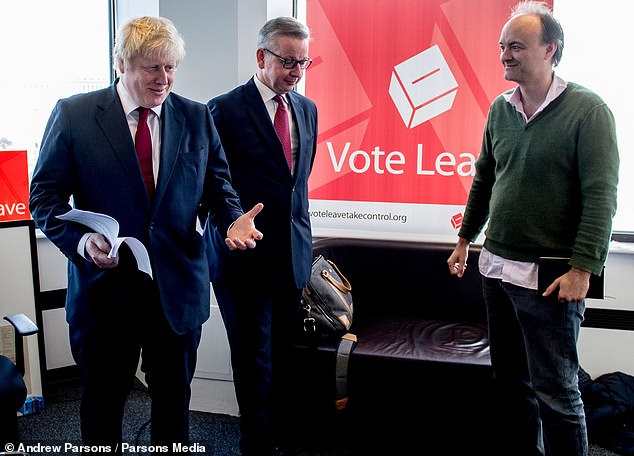 Prime Minister Boris Johnson is seen alongside Michael Gove and Dominic Cummings at the Vote Leave HQ on June 24, 2016

‘All the briefing against Priti [Patel] came from them,’ one ally of the embattled Home Secretary told me. ‘Look at all this stuff about pushing back the boats. She had one meeting with Boris to discuss some new ideas, then the next second it was all over the papers.

‘She said to me, ‘I don’t know what to do. They just keep pressing this stuff out there without even discussing it with me’.’

But No 10 officials reject these claims, especially what they see as the cliched caricature of a manipulative alliance between Gove and Symonds. At one point, there was even an attempt to frame the events of the last week – including Gove’s elevation – as ‘The Carrie Reshuffle’. A narrative that was fatally undermined when one of her closest friends, John Whittingdale, was sacked from his job as Media Minister.

But the power Gove now wields is not in dispute. As one No 10 insider told me: ‘Whenever Boris has an important decision to make, he looks to use Michael as a sounding board. That’s been the way they work for a while now. And you can see the nature of their relationship by the way he’s just entrusted so many important pieces of his agenda to him.’

The question Tory MPs are asking is whether Boris has been too trusting. There’s little doubt Gove is someone who can deliver. But at what price?

As Education Secretary, Gove made headway in tackling ‘The Blob’, those Left-wing elements of the education establishment intent on absorbing and devouring much-needed reform. But in the process, he made so many enemies, and used up so much political capital, David Cameron decided he had no option but to sideline him.

Allies of Gove say a better model for the strategy he intends to deploy within his new fiefdom can be found in his management of the Department for Environment, Food and Rural Affairs. There, his patient engagement with a range of stakeholders, many of whom were traditional Conservative opponents, won him plaudits. ‘The first thing he’ll be doing is stepping back and listening,’ said an ally.

But the reality is there is only one stakeholder relationship that matters. And that’s the one between Michael Gove and his Prime Minister.

However much he may value his counsel, Boris has never forgotten or forgiven Gove’s betrayal of him in the middle of the 2016 Tory leadership election. Unlike the famous ‘Granita Pact’, which saw Gordon Brown and Tony Blair sit down and set aside – temporarily – their differences, Gove and Boris have never engaged in a proper process of reconciliation. They have just muddled on together.

It’s true that a recent Chequers birthday party for No 10 adviser Henry Newman delivered the spectacle of Boris zooming around the grounds on his motorbike, as Gove clung doggedly to his waist.

But that was the product of a social event brokered by Carrie, rather than a genuine political rapprochement. What now binds Boris and his new Levelling Up Secretary is not affection, but necessity.

The Prime Minister knows he has to deliver on his promises to the Red Wall, safeguard the Union and win back the support of Tory MPs and voters enraged by planning reform. And Michael Gove realises this is his last opportunity to leave a lasting imprint on the nation.

The two men may not especially like, or even trust, one another. But they need each other. As do the Government, the Conservative Party and the country.

Although the reshuffle was supposed to breathe fresh life into Boris’s administration, there was a sour and fractious mood at Westminster last week.

Tory stalwarts remain distressed and disillusioned by the tax hike. Modernisers are alarmed by a lack of vision. Red Wallers worried by an absence of direction and clarity. And if the new axis between Boris and Gove fractures, then there’s a danger everything could fall apart.

Caesar has ignored the warnings. Brutus has been welcomed back into the fold. Boris – and Britain – had better hope that his faith is properly repaid.