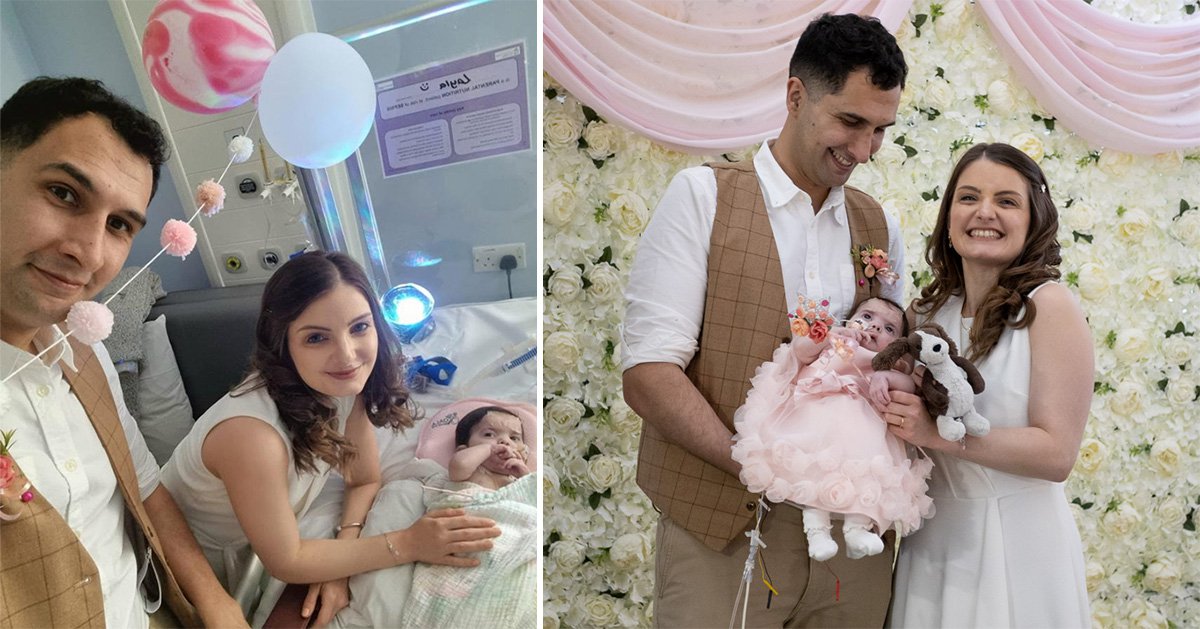 Karim and Louise Rezaie knew they wanted to get married with their daughter, six-month-old Layla, in attendance.

But the baby’s rare illness meant she was unable to leave the hospital to go to a big event.

So, as Layla couldn’t come to a wedding, her parents brought their special day to her.

On May 21, the couple, Torquay, Devon, tied the knot at Bristol Children’s Hospital, right by the side of Layla’s bed.

Karim, 38, said: ‘We’d always wanted to get married with Layla our daughter there.

‘It was obviously a beautiful with the amount of effort they put in.

‘We initially imagined having the chaplain come down and just do a wedding by the bedside, but the play team really put the effort in.’

Layla, who was born on Christmas Day, has been a patient at the hospital for all of her life so far.

She has CHARGE syndrome, a genetic mutation that affects her eating, vision, and heart, and causes other complications.

This means the child is very poorly and needs treatment, but her parents were determined she would still be able to act as a bridesmaid.

Karim, a psychological therapist, added: ‘The whole day was made very magical.

‘A huge tremendous effort was put in by the playmate workers into arranging decorations and music, getting in touch with our relatives, and getting videos recorded for people who could be there.

‘It was a really special day but obviously it was bittersweet.

‘Layla was there, and it was fantastic but we were reminded how poorly she was but it was still great for it to happen.

‘The doctors have said it could take weeks or months before we can take her home.’