A mother-of-four with a coke habit has revealed that she would leave her children on a Friday, telling them she was ‘popping to the shops’ and not return until Saturday afternoon.

Julie, from Scotland, and her brother are featured in this week’s Channel 5’s My Extreme Drugs Diary, wearing masks to protect their identity, and she admits she’s never tried cocaine before but became addicted to the drug after trying it at her 30th birthday party.

The mother said that she’d devoted her 20s to her children, but as they became more independent, she felt ‘left out’ and started doing drugs while they were at school.

‘My kids started getting a wee bit older and didn’t need me the same,’ she adds, explaining what led her to try the drug on her 30th birthday.

Now, in order to indulge in her habits, Julie says she leaves the children with her husband or the next-door neighbour when she needs her fix.  ‘I’m surprised I still have a marriage,’ she says.

Viewers took to Twitter to condemn her for her coke habit, with one even calling her ‘selfish’. 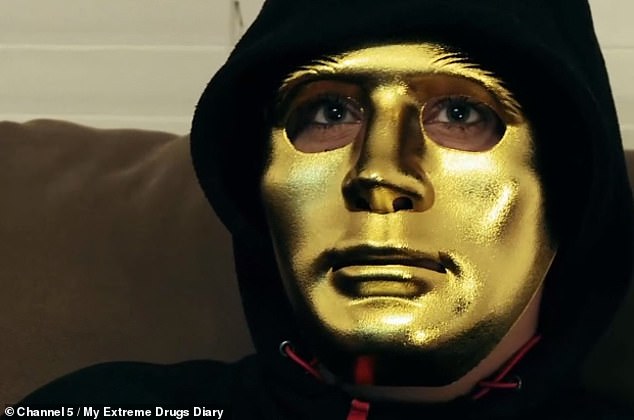 Julie, a mother-of-four (pictured) from Scotland says she tried cocaine for the first time at her 30th birthday party and got addicted quickly after

Mark (left) and Julie (right) resorted to a life of crime for some time in order to funf their cocaine addiction, but now say they have their addiction under control

Speaking about her life before she became an addict, she admits it was comfortable and stable, saying: ‘I was married, four kids, nothing to worry about.’

Now, Julie does cocaine with her brother Mark, who claims he once took 40g of the drug in one evening and spends £1,000 a week on his addiction.

Both say they became immediately addicted after trying the drug for the first time.

‘That one tiny bit, you cannot not want another one,’ Mark says. 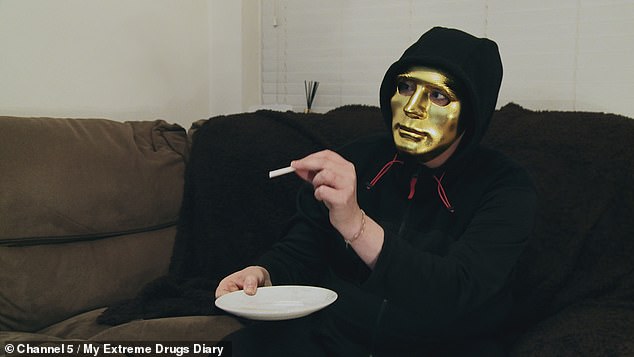 Julie, wearing a golden mask to protect his identity is addicted to cocaine. The mother from Scotland used to do drugs everyday and disappear for hours at a time 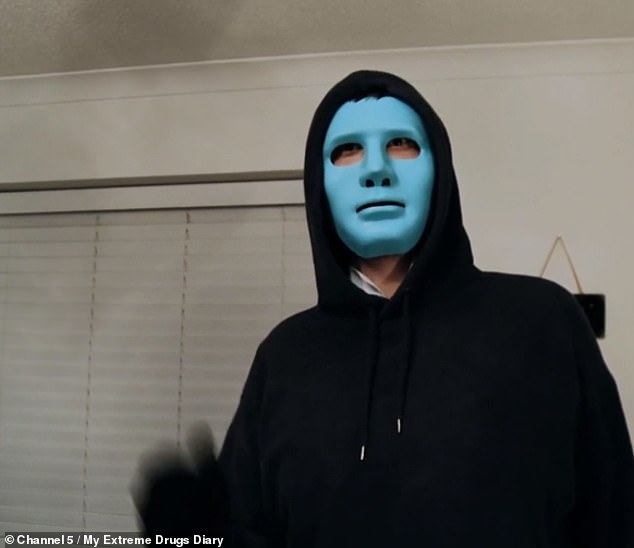 Julie’s brother got addicted when he was 16, and this led him to a life of crime.

‘They say the best thing you can do to make money is to sell cocaine. F*** work and sell cocaine; but don’t take it. But it’s so hard not to take it,’ Mark explains.

‘I ended up taking some everyday, spanking about a grand a week,’ he adds.

Soon, Julie followed in his footsteps after he came to live with her for a few months and she saw how he ‘lived the dream’, partying and selling cocaine.

‘We could sell it quite easily,’ she says of the drug, adding she soon had people in and out of her house all the time and cars at her door. 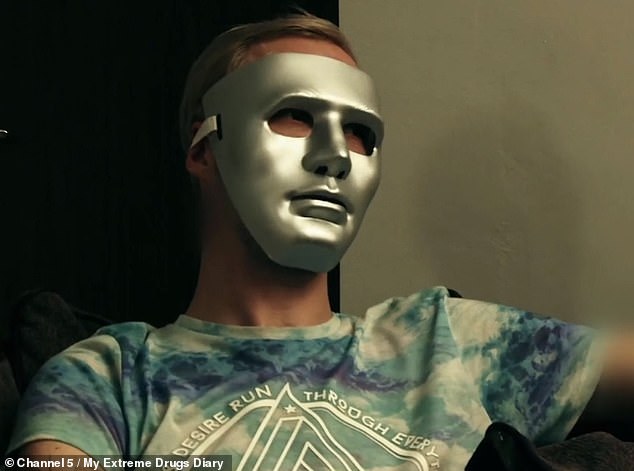 Andy, 25, says he used to ‘rent his body’ in order to finance his drug addiction. The young man from Kent has been doing cocaine for the past seven years

Julie went on to say that she would disappear with her brother for hours at night, leaving her husband ‘devastated.’

As Mark’s addiction spun out of control, he found himself in £10,000 of debt and Emma had to bail him out after dealers started threatening him.

A regretful Julie says she’s now left dealing behind. She still takes cocaine, but claims that she now has her addiction under control.

‘This past six months, ten months maybe, fed up of it,’ she explains.

‘My kids didn’t ask for their mother to be like this.’

Mark says he has also reduced his drug use in the past year and fells ‘happier than [he’s] ever been.’ 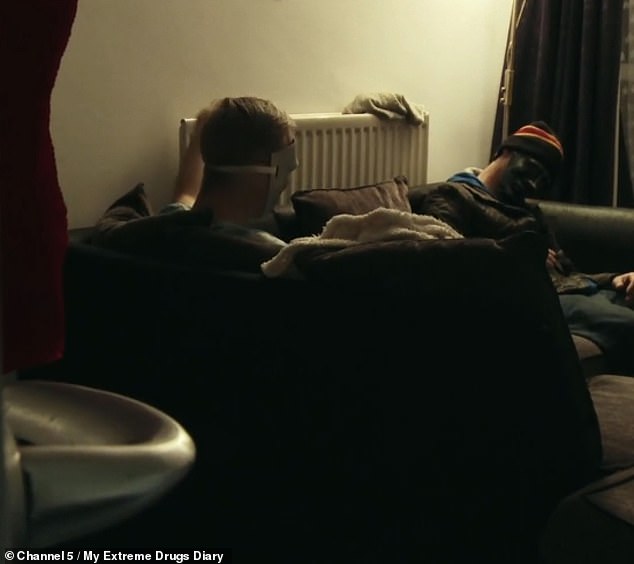 Andy and a friend spend their Friday evening snorting cocaine. Andy’s friend Jim admits that, at 32, having started doing drugs at 13, he’s spend more time addicted to the drug than off

‘Slowly but surely we are f******* smashing it and that’s all that matters to us, ‘ she concludes.

Also featured in the documentary is 25-year-old Andy from Kent, who’s been addicted to cocaine for the past seven years, and uses benefits to support his habit.

In a heart-breaking moment, Andy says cocaine helps him ‘having a laugh’ and a good time, but he wishes he could have fun without drugs.

However others weren’t convinced about Andy, with one saying: ‘I don’t buy that the young kids in their 20’s are addicted at all.

‘In fact so far, I’ve not seen anyone on this programme looking like people I’ve known with coke and crack addictions. They’re just having fun and getting high and drunk. #myextremedrugdiary

While another said: ‘He’ll be struggling tostay employed once his bosses see this #MyExtremeDrugDiary’

However most just commented on the masks, with one saying: ‘Watching #myextremedrugdiary the masks are creepy. People will prob still know who they are tho!!!!!’

One of Andy’s friends, named Jim, who’s now 32 says he started doing cocaine at 14 and has lived longer on it than off the drug. 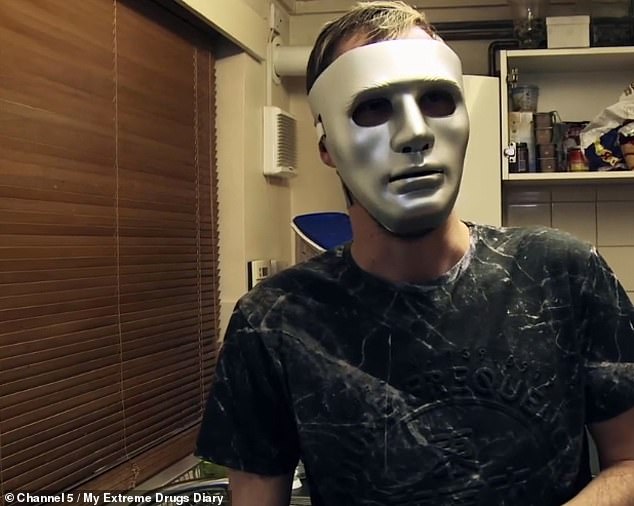 Andy says he used to risk his life every single day to fund his cocaine addiction by ‘renting himself out.’

‘It’s not easy to kick an habit that you love so much,’ he explains.

In the documentary, after snorting cocaine off his house key, Andy says he feels’ much more alive.

But talking about his habit, Andy says he’s gone from actually enjoying the drug to doing it out of habit because of his addiction.

‘I’m not enjoying it no more, I’m now doing it just to live, just to get by,’ he explains, ‘ to have some sort of normality in my life.’

All of his money goes into his drug addiction, and Andy says that without his mother’s help – who bails him out each time he is in financial trouble – he would have been ‘killed.’

But Andy adds that his mother has ”not a clue’ he is actually an addict.

My Extreme Drugs Diary airs Thursdays at 10pm on Channel 5.

Bobby Brown And Alicia Etheredge-Brown On Their Love, Loss, And Sharing Their Lives On Reality TV

A beginner's guide to crystals