Dozens of state government COVID compliance officers have been enforcing public health orders without legal authority, casting doubt on the validity of thousands of dollars worth of fines.

The Age can reveal that as many as 39 out of about 100 Department of Justice COVID compliance officers could have been operating in recent months to enforce the government’s compliance rules without legal authority. 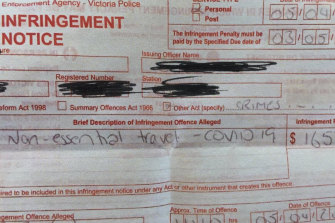 In what has been described as an “administrative error”, it is understood some officials have not been officially “authorised”, a technical term giving them the clout to issue fines of up to $10,904 for individuals and $54,522 for businesses.

Internal sources who spoke on the condition of anonymity have told The Age the bungle could provide a legal basis to contest fines, describing the government’s enforcement regime as “in disarray”.

The error has sparked a departmental probe that will examine, among other things, whether some fines issued by the government are invalid, although the exact ramifications are unclear.

A spokesman for the department said: “We are currently reviewing our administrative processes relating to the appointment of a small number of Authorised Officers and the issuing of some enforcement outcomes under the Public Health and Wellbeing Act.”

The spokesman said if the review were to identify any issues, the department would then work to confirm “whether any enforcement outcomes are affected”.

In November last year The Age revealed that from March 2020 to September 15, 2021, 44,681 fines were handed out by police across Victoria, equating to tens of millions of dollars in potential revenue.

But only 3673 fines (or 8 per cent), were fully paid, with another 3366 recipients on payment plans. About 12 per cent of the fines issued had been withdrawn, cancelled or written off.

It is believed the Department of Justice initially found that 26 officers, some of whom are on short-term contracts worth around $150 a year, had not been properly sworn. But a source said by sheer luck no fines had been issued.

While the extent of the problem is unclear, it is understood the department subsequently identified another 13 officers.

Under Victoria’s current COVID-19 rules, adults can be fined $909 for failing to comply with a pandemic order, or nearly $11,000 if they are put through the court system.

Individuals can also be hit with a fine of more than $2700 if they breach isolation or quarantine requirements, or $100 if they are caught not wearing a mask indoors in public without a reasonable excuse.

The Therapeutic Goods Administration confirmed on Tuesday it was looking at allegations of some retailers selling repackaged rapid antigen tests from bulk packs.

Under current regulations, COVID-19 tests can only be removed from their original packaging with the authorisation of the manufacturer.

Breaching the rules carries fines of up to $888,000 for individuals and $4.44 million for corporations, or civil penalties of $1.11 million and $11.1 million respectively.