Industrial Relations Minister Michaelia Cash has called a meeting of the nation’s employer associations and unions to try to find common ground on mandatory workplace coronavirus vaccinations, a contentious issue some businesses believe will keep their staff safe and doors open as cases rise.

A dozen major employer organisations including the Australian Chamber of Commerce and Industry, Australian Resources and Energy Group, and Council of Small Business Organisations of Australia have been invited to the meeting on Wednesday, which will also cover the general rollout. 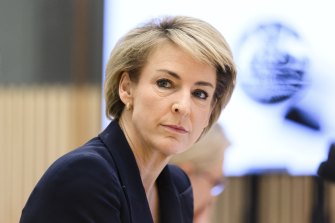 But unions will use the meeting to push another topic: universal paid vaccination leave so workers, including casuals, don’t have to lose income or use up other time off to get vaccinated.

Figures compiled by the Australian Council of Trade Unions suggest 1.6 million people have already been given some form of vaccination leave by their employers, including major brands such as Woolworths and Westpac.

The ACTU’s paid leave proposal would go further than many of those companies. All workers, regardless of income, would get two days paid leave per dose to cover vaccination appointments and any immediate side effects.

ACTU boss Sally McManus called on the federal government to legislate the plan even if only on a temporary basis to cover the vaccine “sprint” later in the year. 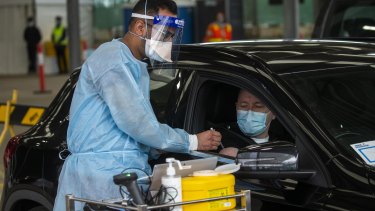 The ACTU wants employees to have two days off per jab if they feel unwell.Credit:Paul Jeffers

“We know that, especially for people who are in insecure work and have no paid leave entitlements, worrying about losing income because of side effects or in order to get the vaccination is a barrier for them,” Ms McManus said. “[Paid leave] is part of a national crisis measure to do everything we can to support the vaccination drive.”

Ms McManus denied a leave program would drive attention to the side effects of vaccination, saying with current vaccination rates most Australians would already know someone who felt ill for a day after vaccination and then quickly recovered.

About 47 per cent of people over 16 have had at least one dose of a vaccine.

The debate about mandatory vaccinations has swept into public view over the last fortnight because businesses such as food manufacturer SPC, which sees it as a key way of keeping staff safe and facilities operating, know mandates take months to put in place.

Multiple employer and union sources confirmed Senator Cash, who is also Attorney-General, had called a meeting on Wednesday morning to discuss the vaccine rollout and workplace jabs.

A dozen industry associations have been invited along with a corresponding number of unions for the closed-door meeting.

Attendees, who were not authorised to speak on the record ahead of the meeting, said they did not expect a breakthrough at the meeting because of differing opinions both between employer groups and within the government about whether vaccines should ultimately be encouraged or mandated.

A spokesman for Senator Cash urged businesses and unions to collaborate to encourage vaccination and congratulated businesses that were granting paid leave for it.

“Under existing arrangements, employers are not required to provide workers with paid leave to get vaccinated, however, the government strongly encourages all employers to provide flexibility and support, including leave arrangements, to allow their employees to be vaccinated,” the spokesman said.

On Thursday the federal workplace regulator released advice suggesting essential businesses in high-risk areas, such as a supermarket in western Sydney, were “more likely” to be able to mandate jabs. Then on Friday, Prime Minister Scott Morrison unveiled further advice suggesting state work health and safety regulators could issue directions protecting small businesses from compensation claims filed by staff who got sick at premises that did not mandate vaccines.

The challenge of mandatory vaccinations has been underscored by the aged care rollout. The Department of Health sent an email to the sector on Monday saying it was “time to get vaccinated now” ahead of the September 17 deadline. It emphasised that the date for mandatory jabs was quickly approaching and warned that only 42 per cent of workers had received a first dose.

Stay across the most crucial developments related to the pandemic with the Coronavirus Update. Sign up to receive the weekly newsletter.

19 of TV's Most Inspirational Female Friendships