A new kind of intimacy reveals itself through the increasingly popular livestreamed concert medium. It’s live and uncut but add a pandemic to the mix and it’s also super-personal, bracketed with socially conscious messaging and underscored by a sense of niggling doom.

Over a 25-minute set, Australian singer-songwriter and prodigious drummer G Flip unwrapped lollies and set up her drum kit in her home, showing a candour via Instagram’s live function you can’t mimic on stage.

Her concert was part of the #TogetheratHome series by Global Citizen and the World Health Organisation, who’ve rallied some big names to play home mini-concerts to raise funds to fight the global coronavirus outbreak. 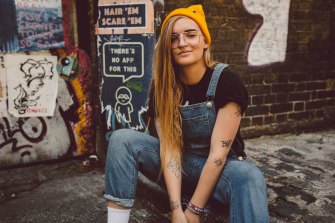 The democratising beauty of social media is that it is audience-driven in a way live performance is not. G Flip’s tuned-in fans were her focus: she played requests from the comments on her livestream, even breaking into a guitar-led rendition of the chorus of Usher’s OMG because someone proposed she should.

As she beamed out of her home studio to the world (“Sorry guys, it’s a mess”) we caught a glimpse of the artist’s everyday. This lent a new, contextual layer to songs such as carefree, lackadaisical opener Stupid and the melancholic Hyperfine.

She wrapped up her set by asking fans to leave a guitar or drum emoji, depending on what they wanted to hear from her as a final song.

The livestream format rewards artists with natural charisma, which G Flip conveniently oozes. In a candy-pink tracksuit she was casual, charming and candid – anything less would have been blindingly obvious with a screen so close up.

With all the production values stripped out of her songs, G Flip’s naturally clear voice was also a bonus. Her sparse, acoustic version of Lover was folksy and Jack Johnson-esque, showcasing her lush vocals over lightly strummed guitar.

She began and ended with a PSA on social distancing and had the audience for it to make an impact: the counter ticked over to more than 1600 viewers tuning it at once at one point.

But the most poignant part of the concert? The deeply relatable, of-the-moment chorus of Drink Too Much: “I just wanna get in trouble/I wanna be out to lunch”.