While their looks were on the more low-key side of camp — if "low-key" camp is possible — Camila Mendes and Charles Melton’s Met Gala 2019 appearance had fans shook for more reasons than one. Not only did Mendes and Melton bring the "wow!" factor with their ‘fits, but the annual fashion ball was Mendes and Melton’s first red-carpet together as a couple.

Melton showed up in a glittery, black suit, custom-made by Sies Marjan, and looked like a walking night sky. Mendes, on the other hand, gracefully channeled Big Bird in a Prabal Gurung gown. Her look was offset with blue accents: a periwinkle satin sash, icy earrings, a baby-blue ribbon braid, electric winged eyeliner, and delicate strappy heels. As defined by cultural critic Susan Sontag’s "Notes on ‘Camp,’" camp is a "love of the unnatural: of artifice and exaggeration." It’s strange, over-the-top, and thoughtful. While Mendes and Melton weren’t the most out-there or maximalist couple, there was a bit of atypical glamour to their look.

A quick catch-up if you haven’t been following these two closely: Mendes has been on Riverdale since Day 1 as cheerleader Veronica Lodge. Melton came into the picture during Season 2, replacing Ross Butler for the role of Archie Andrew’s football rival, Reggie Mantle. 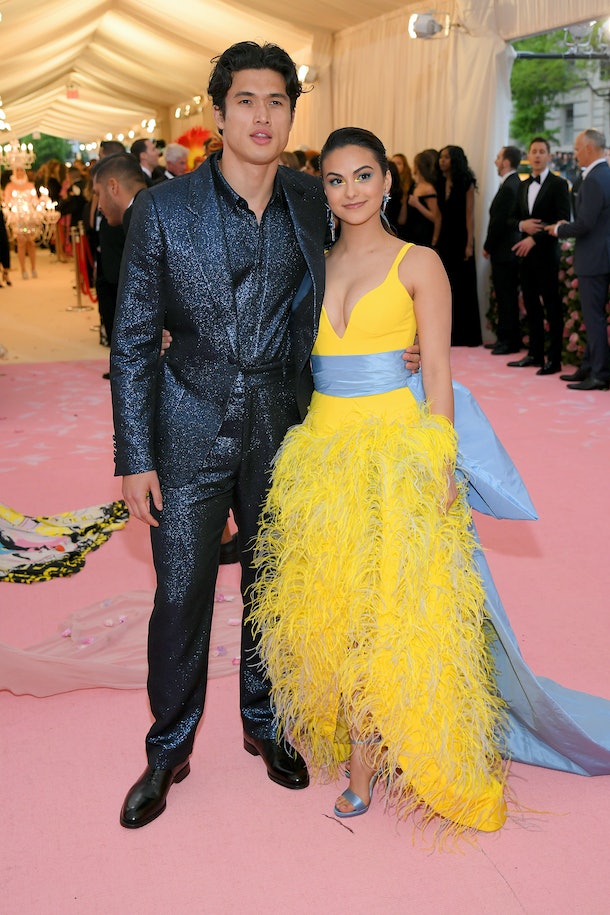 The two first sparked romance rumors in September 2018, when Mendes posted an Instagram picture of her crew on a yacht. The telling detail? Her and Melton cuddled up real close as they shared a towel. That same month, a source told E! News they’d spotted Mendes and Melton kissing at a movie theater in Vancouver. Mendes-Melton became Instagram-official that October, when Mendes posted pic of Melton planting a kiss on her nose.

While she has posted the occasional cute couple pic with Melton (and vice versa), Mendes has historically kept relationship deets to herself. In a March 2019 interview with Los Angeles Confidential, Mendes said:

Ultimately, she simply said that working with Melton is "great."

Mendes and Melton weren’t the only Riverdale-to-IRL couple in attendance: Lili Reinhart and Cole Sprouse gave camp a shot, too. Sprouse channeled the ’70s in a burnt-orange Salvatore Ferragamo suit, embroidered with flowers, and topped it off with slicked hair and suede boots. Meanwhile, Reinhart gave us minimalist Marie Antoinette in a bodice, shorts, and a cape — also courtesy of Ferragamo — with a well-blushed face and a coiffure decorated with orchids.

Riverdale fans might remember that Cole Sprouse and Lili Reinhart’s first couple appearance was a Met Gala, too (dressing for 2018’s "Heavenly Bodies" theme, Reinhart literally came to slay in chainmail and crushed velvet in tribute to Joan of Arc). It seems like there’s just something about a Met Gala that makes it perfect for saying "hello!" to the world as a fresh-faced couple. 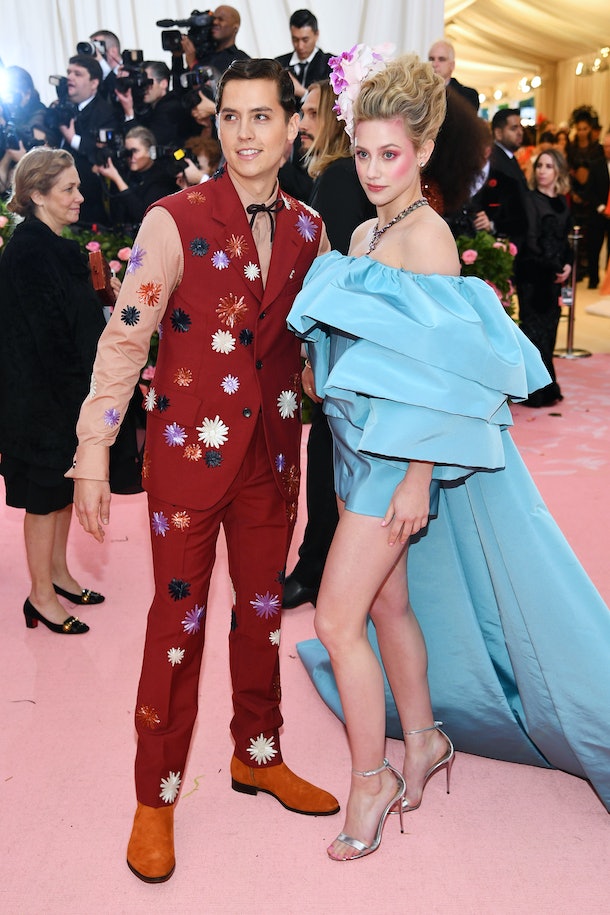 Currently about to wrap up its third season, Riverdale has been renewed for a Season 4. After starring in Netflix’s The Perfect Date this year with Noah Centineo, Mendes has two more films slated to come out. Mendes recently joined the cast of wedding comedy Palm Springs and stars in a mother-daughter thriller Coyote Lake (hitting theaters Aug. 9).

Melton is set to star in upcoming YA novel adaptation, The Sun is Also a Star, with Yara Shahidi (which hits theaters May 17). He plays Daniel Bae, a poet and hopeless romantic. Shahidi plays Natasha Kingsley, a straight-laced girl who meets Daniel 24 hours before her family is to be deported. In his joint May 2019 cover with Shahidi for Cosmpolitan, Melton coyly explained that Mendes was the inspiration for the energy he brought to the romantic role. Melton said, “I may or may not have been thinking about — when I auditioned, when I was doing my research — a certain relationship. Thinking about, you know, kind of how I’d be.”

Whether it’s on the ‘gram, on Riverdale, off set, or on red carpets, it’s hard not to root for Mendes and Melton. I’m sure I’m not alone in saying: I’m 100% looking forward to seeing more of this warm-hearted, fashion-forward couple and what they have in store in the future.