Paediatricians, health specialists and a growing number of education experts say students should go back to school next term, as pressure grows on Premier Daniel Andrews to reveal his plans for the return of face-to-face learning in Melbourne.

The state opposition, under restored leader Matthew Guy, this week demanded that all students return when term 4 starts on October 4. But while Mr Andrews has pledged to lay out his road map soon, Victoria’s rising case numbers could lead his government to baulk at reopening schools in Melbourne. 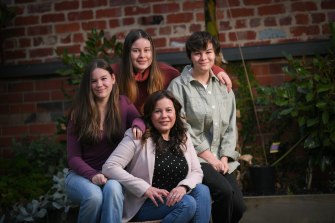 The state recorded 334 new COVID-19 cases on Friday, while NSW recorded 1542 new local infections. A Coburg man in his 70s, who was unvaccinated, died.

Paediatrician Jacqueline Small said: “Parents can be reassured that, in the main, COVID with the Delta variant remains a mild illness in children”.

Students at schools in Melbourne have missed about 150 days of classroom schooling since the pandemic began and there are growing concerns over the mental and physical wellbeing of students, particularly those from disadvantaged homes where schools are a crucial safety net.

Andrew Steer, a paediatric infectious diseases physician at the Royal Children’s Hospital, said: “We should do everything we can to reduce the risk of children getting the virus whilst prioritising their learning and wellbeing.”

Sydney’s schools will begin returning from October 25, but nothing has been said by Mr Andrews or Education Minister James Merlino on a return-to-school timeframe in Melbourne.

Mr Merlino said on Friday he wanted children back to face-to-face learning as soon as possible, “but with hundreds of children with coronavirus, including children seriously unwell in hospital, we won’t put the health of Victorian kids and teachers at risk and flood schools with people before we get public health advice that it’s proportionate and safe”.

Opposition education spokesman David Hodgett said Mr Andrews’ failure to detail when children would return to school in Melbourne was not good enough. “There’s not a health professional in the land that believes kids should continue with remote learning,” he said. “Daniel Andrews has had months to formulate a plan, consult experts and have our kids ready for school in term 4.”

Since March, the Australian Education Union has been demanding that teachers be prioritised for vaccinations but has stopped short of calling for mandatory vaccinations. Other than those supervising year 12 students, they remain only as eligible as other Victorians.

Only NSW has mandated vaccination for teachers, and it is also the only state to have any idea of how many teachers are vaccinated. A NSW Education Department survey shows two-thirds of public school teachers have had their first vaccination.

Neither Mr Merlino nor the Victorian Education Department answered when asked what percentage of Victorian teachers and staff were vaccinated.

Federal Education Minister Alan Tudge said teachers and support staff needed to be vaccinated, but stopped short of saying it should be mandatory. “Decisions on whether to make vaccinations mandatory for teachers are for state and territory governments,” Mr Tudge said.

Not all parents want their children to rush back to the classroom. Malvern East mother Tamara How believes her three daughters should have the option of waiting until they are fully vaccinated before being compelled to return.

“Not everyone has got the resources to keep their kids at home,” Ms How said.

“Obviously the preference is for face-to-face learning. But for me, my children’s results haven’t changed, their mental health hasn’t declined – they’re doing really well. The teachers have been diligent in checking in on them and making sure they’re staying connected not just with their school work but with their mental health as well.”

Ms How said children and their parents should get a choice about returning to school particularly if unvaccinated students were concerned about COVID-19. “Children should be included in the decision-making,” she said. “They’ve had so many choices taken away from them already. Why should they have this taken off them as well?”

Schools outside Greater Melbourne reopened on Friday and were told in an operations guide – likely to be mirrored in city schools when they reopen – to consider holding classes outdoors if weather permits, to keep inside doors open and to avoid using ceiling fans or recirculated air conditioning.

“Outdoor air ventilation should be increased whenever possible, including in bathrooms, to dilute the concentration of airborne virus and to encourage air moving through a space,” the guide said.

Staff were also told to have their breaks, meals and meetings outdoors, avoiding staff rooms where possible.

The department has backflipped on an edict that senior students living in Melbourne, but going to a regional school must stay home for the rest of term 3, following a report in The Age on Friday. All year 12 students who go to regional schools will be allowed on-site next week to complete school-assessed coursework, including those who live in Greater Melbourne.

Professor Steer, who is also a director of Murdoch Children’s Research Institute’s infection and immunity area, said when children did return to school the priorities needed to be vaccinating teachers and school staff, parents and caregivers. Children aged 12 and up should also be vaccinated as soon as possible.

James Trauer, who heads Monash University’s epidemiological modelling unit in the public health school, said teachers urgently needed to be vaccinated, and that Melbourne and Sydney would in the next few months experience “a large epidemic of the unvaccinated … And that is going to be well before we get vaccines approved for children aged under 12.”

He said it was a different situation for high school children as most were now eligible for vaccination.

University of Sydney infectious diseases expert Professor Robert Booy said Australian schools should follow Britain’s lead and invest in rapid antigen testing. He said that schools should return to face-to-face learning, and that vaccination should be made mandatory for teachers.

Dr Small, president-elect of the Australasian College of Physicians, said factors in any school reopening plan should focus primarily on vaccinating teachers, adolescents and their families. “It’s very important to address inequities that have been increasing through COVID … and address the emerging problems with mental health that’s been widely documented,” she said.

Stay across the most crucial developments related to the pandemic with the Coronavirus Update. Sign up for the weekly newsletter.

Entrepreneur reveals how she she created her own version of Ascot