There’s no question whatsoever that every member of BTS loves and respects their fellow bandmates. They’re like brothers and have shared so many successes together, so it makes sense that they’d all love each other like family. And they demonstrate that every time they talk about each other. When it comes to V, in particular, all the boys have a lot of great things to say. All of BTS’ quotes about V prove that the boys really hold him in high esteem.

As one of the youngest members of the group, V offers BTS a lot of skills, energy, and talent. And all of those qualities have endeared him to his fellow bandmates. V, of course, has different relationships with everyone in BTS. But if their quotes about him are anything to go by, there’s one thing that’s the same about each one: they’re all full of love and respect. They all seem to think of him as a younger brother who makes them laugh and is their best friend, which speaks volumes about what kind of person V is.

I suppose it goes without saying that V is a highly respected member of the group, even though he’s one of the youngest. And BTS’ quotes about him give a lot of insight into what the people closest to V think about him. Here’s how BTS views him: 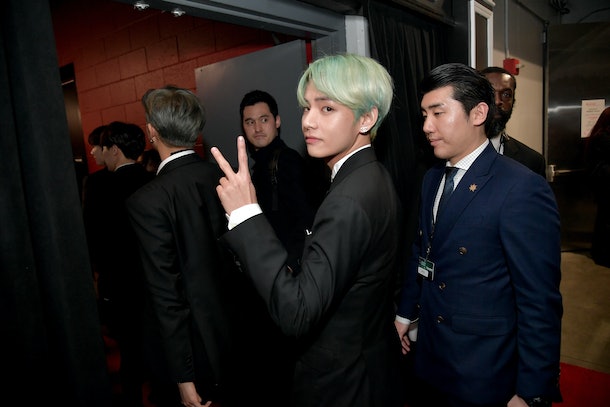 During an appearance on Hulu Japan’s We Love BTS, RM and the rest of BTS shared their thoughts on V. RM, in particular, said he found V to be extremely friendly.

“Taehyung is a friend that possesses many things, so he wins favor over everyone," RM explained. "His approach is very friendly and shows that kind of innocent side I greatly admire."

2. Jin Loves That V Is So Expressive

During that same Hulu special, Jin opened up about how much emotion V is able to express while performing. “He is so rich with expressing emotions,” Jin said. “When I look at him on the screen, I get this feeling that idol is a vocation for him.”

3. Suga Respects V As A Performer

“He’s such a great performer, so I respect that,” Suga said during that Hulu special. While Suga’s words were few, it’s clear that there’s a lot of love and respect between these two! I’m sure what Suga had to say means a lot to V. 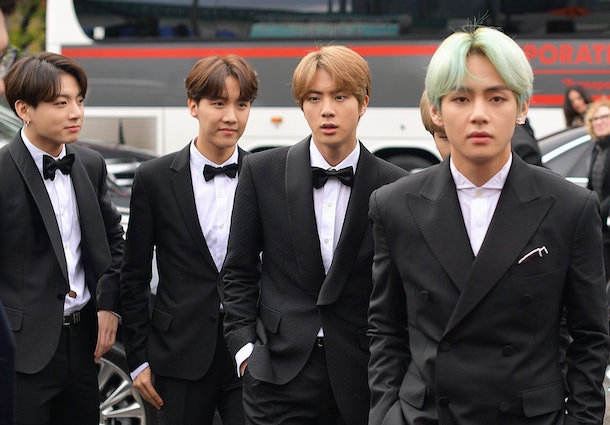 When sharing his thoughts on V, J-Hope expressed great admiration for his friend’s immense talent. “V is a friend that has lots of talent. That talent I can’t put it into words. He has that talent he shows off so naturally,” he explained.

When asked what he loves most about V, Jimin gushed about what a wonderful personality V has. Apparently, V is very innocent which is something Jimin admires.

“I get a lot of feelings that he is so pure and untainted. It’s kind of different from seeing him as a kid. ‘Childish’ is not what it is. He has this ‘untainted vibe’ I get a lot, probably all of you know without my explanation,” Jimin explained.

He also shared that V’s innocence helps him and the rest of BTS get back in touch with their own sense of innocence and youth.

“Those sides come off to me as very adorable and he might not realize it, but that becomes an opportunity for us to think about it once more,” he continued. “Those things occasionally become strength. So, I envy him from time to time that he can be so untainted.”

According to Jungkook, V is both calm and calculating, but in a good way. He really admires V’s ability to take stock of situations and plan carefully before taking any action.

During BTS’ Summer 2018 package, each of the boys introduced other band mates and said what they thought about them. Jin introduced V and said some really lovely things about his artistic ability.

Say that louder for the people in the back, Jin! So talented!

8. Jimin Learns A Lot From V

Jimin and V have a really special bond and that was made clear when V shared a heartfelt letter he wrote for his friend in an episode of BTS’ Bon Voyage. While reading the letter, which thanked Jimin for always being there for him, V shed a few tears and made the rest of BTS quite emotional.

In response, Jimin said, “Those who watch us, they might say I only tend to Taehyung and not him. But I actually learn a lot from him. He makes me feel good and touches my heart often. That’s when I’m thankful to have Taehyung as my friend.”

Check out the touching moment below:

Wow, that is the kind of friendship everyone should aspire to have. Made me tear up a little, if I’m honest!

Jin loves V and all his expressiveness, but he does admit V is a little strange — in all the best ways, I’m sure.

So, basically V is an alien. At least, according to Jin. (Maybe that inspired his out-of-this-world Line Friends character, TATA?) Too funny!

10. RM Would Take V To A Deserted Island If He Had To

In a 2018 Interview with Non-no Magazine, RM revealed that if he could take only one thing with him to a deserted island, it would be V. “Instead of saying that I rely on him… it’s more like if he’s there, he won’t back down,” RM said.

Sounds like V is a pretty reliable person in that sense!

All in all, it sounds like the boys of BTS love and appreciate V immensely. He’s definitely a unique character and adds so much fun and personality to BTS’ dynamic. We love you, V!

How to make money online from home – The Sun

We HAVE to start living our lives again, writes DAVID BLUNKETT