He ended face-up on the kitchen floor — alive.

A British paratrooper somehow escaped with his life after smashing through the roof of a California home.

The soldier was taking part in a training exercise with American allies 15,000 ft above Camp Roberts when his parachute failed to fully open.

Incredible pictures from the scene showed a gaping hole in the roof, with the trooper laying on the kitchen floor, his half opened chute still tangled in the wreckage above. 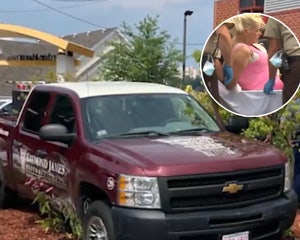 Amazingly, he suffered only moderate injuries, and is recovering in hospital.

The accident occurred just before 5 PM on July 6; Atascadero Police Department received multiple 9-1-1 calls as witnesses on Via Cielo reported seeing him spiraling through the air before smashing into the home.

“The parachutist was conscious but stunned with complaints of pain but no visible serious injuries,” it reported.

“The occupants of the residence were not home at the time and therefore were uninjured.”

“I was in shock. I’m like, what?” one neighbor Rose Martin, told KSBY.

Martin, who is a registered nurse, heard banging on her front door moments later to summon her help.

Woman Killed on Ride-On Mower After Getting Hit by Plane

“So I ran in to make sure he was okay and I checked on him and his eyes were open but I wasn’t sure if there were any injuries,” she said. “I didn’t want anyone to move him.”

“It’s a miracle in my estimation, really. I mean, who lands like that without a parachute and lives?”

The homeowner’s mother told the site the landing was shockingly clean — relatively speaking.

“Came through the roof, through the tresses and there’s not that much damage in the house,” Linda Sallady said. “It’s amazing. It’s mostly the ceiling, the sheetrock. He missed the counters, appliances, everything.”

Investigation revealed that the soldier had been taking part in a group maneuver; all others participating in the jump managed to land safely in the designated landing field.

The UK Ministry of Defence confirmed to MailOnline the soldier was British: “There has been a parachuting incident involving a British soldier training alongside American allies in California,” it said. “The soldier received minor injuries and is recovering well.”

NY Man Killed After Being Hit by Parked Truck