Woman dubbed ‘Britain’s loneliest shepherdess’ reveals how life on the farm is ‘testing’ for her relationship with firefighter husband and says it’s ‘hard to get quality time’ with their son, one, on BBC2’s Life On The Farm

A new BBC documentary has given a glimpse into the life of Britain’s youngest solo shepherdess Emma Gray, who last year became a mother for the first time.

The farmer, 34, who once wrote a book about her life as Britain’s loneliest shepherdess, married fireman Ewan Irvine, 41, in 2018 after meeting him four-years ago, and gave birth to their first son Len last year.

While Ewan is still learning the ropes, the pair manage to run a flock of 400 ewes, several cows and 20 border collie dogs of various ages on their remote Fallowlees Farm in Northumberland. 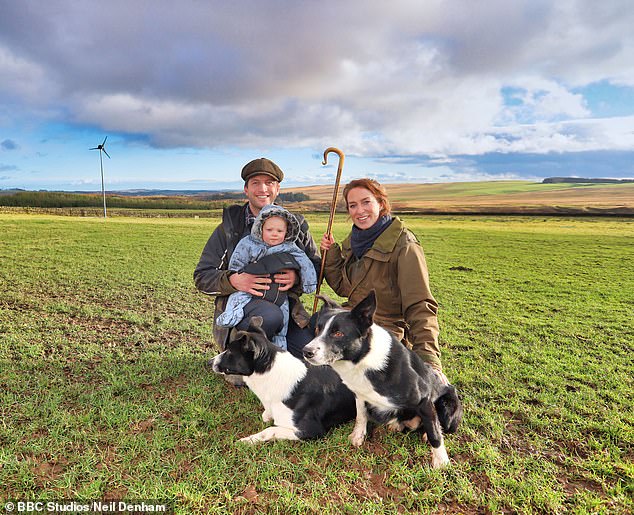 A new BBC documentary has given a glimpse into the life of Britain’s youngest solo shepherdess Emma Gray, who last year became a mother for the first time. She is pictured with husband Ewan Irvine, 41, and one-year-old son Len at Fallowlees Farm

‘It’s hard to get quality time,’ admits Emma, ‘We get lots of time like this which is quite testing of a relationship I think.

‘It’s quite difficult working together with stock like this. Like cows, we’ve nearly gotten a divorced when moving cows in the past.’

And while Ewan held some apprehension about his agricultural career, he now says he feels there’s ‘a bit of farming in everyone’.

‘There has been some trepidation’, says Ewan, ‘Because it’s not my career and I don’t come from a farming background, but I’ll try and do my best not to let anyone down.’ 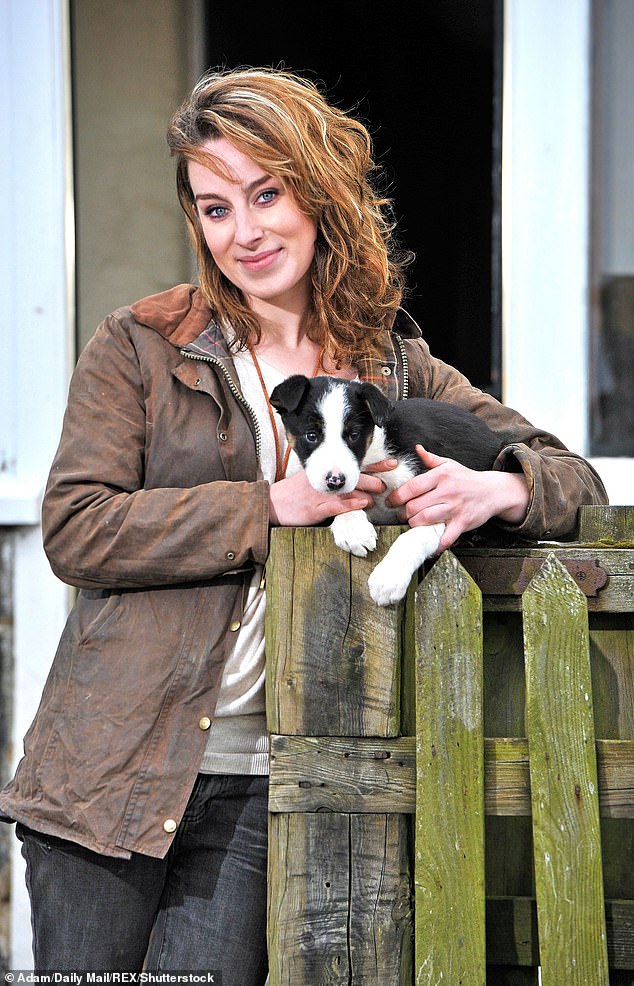 Emma once wrote a book about her life as Britain’s loneliest shepherdess, after a split with her fiancé prompted her to take sole tenancy of Fallowlees Farm

He later adds: ‘Maybe there’s a bit of farming in everyone, from being hunter gatherers we went into farming and I reckon it’s in our DNA.’

The documentary sees Emma temporarily leaving their home to compete in the English National Sheepdog Trials, leaving Ewan in charge of the Northumberland farm.

‘It’s a steep learning curve’,  he admits, ‘I’ve been living with Emma for four years now and I’m a bit overwhelmed without Emma here, because I never know what to prioritise. Emma just instantly knows what needs to be done.’

He says: ‘I’m slowly getting her to tell me and include me, because sometimes she thinks I should just know and guess. So yeah, I miss her when she’s away. ‘ 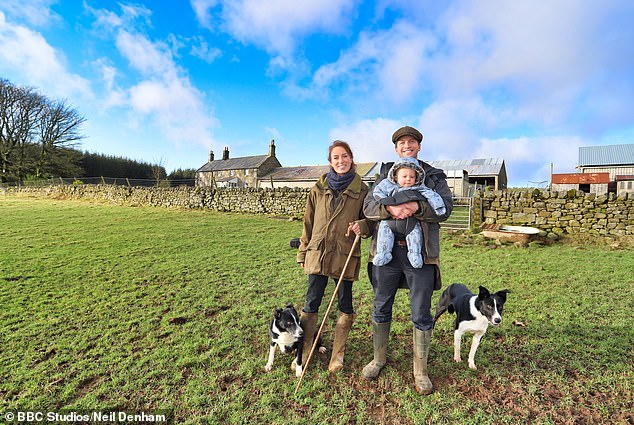 In the new documentary, which airs tonight at 9pm, Emma reveals how she and her husband Ewan are adjusting to life on the farm as a family

Emma hit the headlines 11 years ago, aged 23, when a split from her fiancé prompted her to take sole tenancy of the National Trust’s 150-acre Fallowlees Farm in Northumberland, making her Britain’s youngest solo shepherdess.

She later became the first woman to win the prestigious Northumberland Sheepdog Trials League in the contest’s four-decade history.

But rural life wasn’t easy – she struggled to find a husband and penned a memoir of her lonely life on the farm in 2012, called One Girl and Her Dog.

Emma longed to find a match, but her search for love suffered a major setback when she broke her back in a near fatal quad bike accident in June 2016. 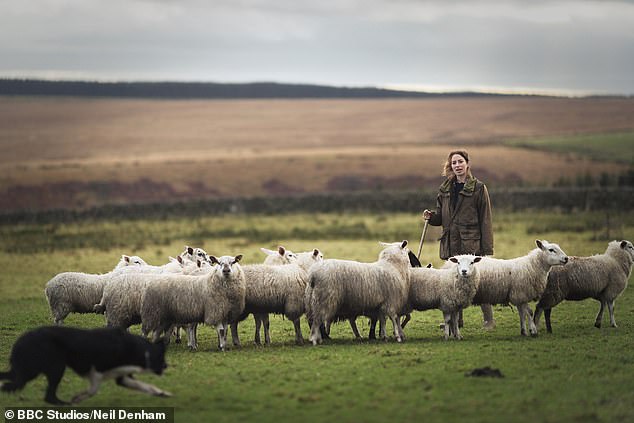 The shepherdess even appeared in The Sun that same year, revealing that she was looking for love in a photoshoot which encouraged potential suitors to contact her.

At the time she described her perfect date as a ‘tall, rugged dog-lover who doesn’t mind a bit of muck’.

Not only did Emma become the first solo shepherdess and sheepdog trial champion, she has since broken a world record, and made one of her border collie’s canine royalty – after selling her for a world record £18,900 at auction.

She made 14,000 guineas, an old currency still traditionally used in some livestock bidding, after selling sheepdog Megan to USA buyer Dr Pamela Helton. 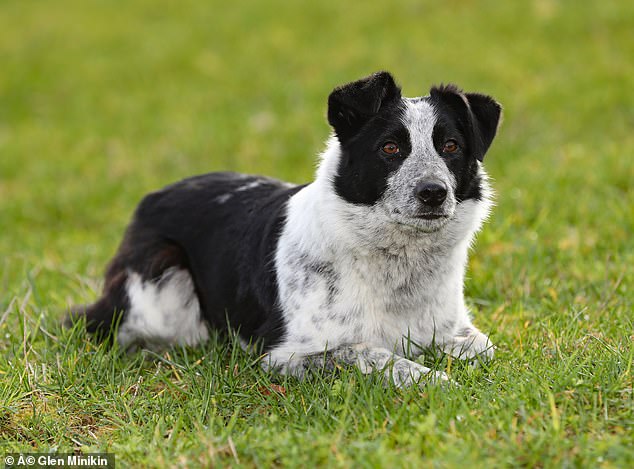 Emma made border collie Megan (pictured) canine royalty – after selling her for a world record £18,900 at auction

While similar farm dogs usually sell for around £2,000, the two-and-a-half-year-old fetched the huge sum because she comes from a family of champions.

Emma also set the previous record of £14,700 for sheepdog bitch Brenna a year ago.

It may not be too long until the family own another record breaking sheepdog, as the documentary also sees Ewan’s dog Rita, the daughter of Brenna, give birth to her first litter of pups. 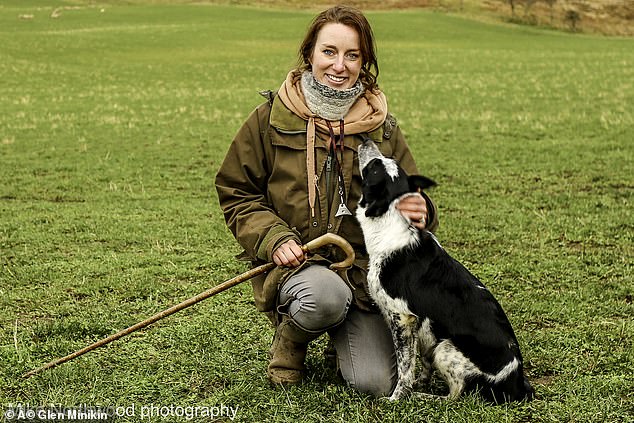 She made 14,000 guineas, an old currency still traditionally used in some livestock bidding, after selling sheepdog Megan to USA buyer Dr Pamela Helton

‘You’re so proud it’s like children it’s not quite as a exciting as when Len came but it’s not far off’.

‘You can’t help but get a heart swell when you see a life being born.’