Brisbane commuters living in the inner-eastern suburb of Norman Park are fighting to have their axed cross-river ferry to New Farm returned.

However, Brisbane City Council said the average cross-river trip from Norman Park to New Farm attracted only 139 passengers a day, fewer than one person per five-minute river trip. 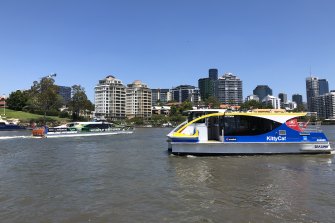 Norman Park residents are continuing their debate to have their cross-river ferry replaced by a KittyCat service. Credit:Lucy Stone

Two residents and about a dozen supporters came to the council meeting on Tuesday to present their case, arguing a cross-river ferry stop could be built for less than the $7.2 million the council had quoted.

That would allow a new KittyCat to stop at Norman Park, possibly shared with a service from a nearby suburb.

“The cost seems prohibitive especially as the extensive New Farm Ferry Terminal upgrade only about a fraction of this cost in 2019,” Norman Park residents spokeswoman Katy Briggs said on Tuesday.

“…Was a less expensive option considered by Brisbane City Council to allow access by the KittyCats?”

Ms Briggs said studies on the environmental and traffic implications of the decision to axe the ferry from Norman Park to New Farm should have accompanied the decision.

The decision was made in July 2020 after report into the condition of the council’s old wooden-hull ferries was received. 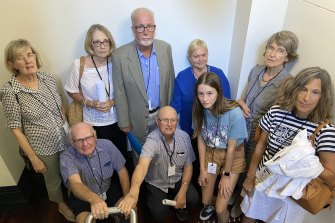 Some of the Norman Park residents – including spokespersons Mark Stanton and Katy Briggs (standing centre) continue to argue to keep their ferry service from Norman Park to New Farm.Credit:Tony Moore

The fleet of nine was being assessed for disability compliance by the council early in 2020 when one 32-year-old vessel was found to require “a significant maintenance overhaul”.

Some services were adjusted and returned using new KittyKats, however the Norman Park to Newstead service was axed.

Norman Park resident and frequent ferry commuter Mark Stanton said more than 6000 residents now lived in the suburb and the TransLink alternatives – buses or bus and CityCats from a nearby stop – added 40 minutes to a trip to New Farm.

Mr Stanton also disputed the $7.2 million cost to build a new ferry stop at Norman Park. A disability access standard stop needs to be higher for the CityCats and KittyCats.

“We haven’t seen any figures on the estimated $7.2 million to upgrade our ferry stop, so until we see that how can we believe the figures they are telling us about patronage?” he said.

“We understand the disappointment residents feel at losing their ferry service,” he said.

Cr Murphy said the decision came after a review of 2019 passenger patronage, before COVID-19 interrupted passenger numbers, at the Norman Park to New Farm ferry.

“Since 2010 the average daily patronage based on a financial year has not exceeded 139 passengers per day,” he said.

“So this equates to, unfortunately, less than one person per service.

“By comparison, the Bulimba to Teneriffe service has an average of 574 passengers per day, so it is a significant difference.”

Cr Murphy added it was hard decision and the council appreciated the campaign by the residents, but the decision would not be changed.

How Did Snoop Dogg and Martha Stewart Meet?

Why Kate Middleton's 'Time to Shine' Is Finally Here