This wrap of Melbourne shows opens with the Dolly Parton extravaganza 9 to 5 the Musical, and takes in Bell Shakespeare’s touring production of Comedy of Errors, and a five-star review of Musica Viva’s latest concert.

MUSICAL THEATRE
9 to 5 The Musical ★★★★
State Theatre, until September 18 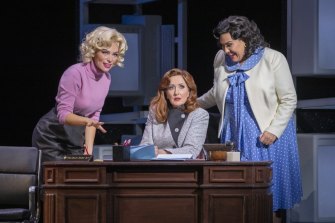 Erin Clare, Marina Prior and Casey Donovan in 9 to 5.Credit:David Hooley

9 to 5 The Musical is much like its creator, Dolly Parton: perky, colourful, amiable, singable and fully renovated – and it doesn’t take itself too seriously. It’s almost enough to make you want to visit Dollywood. Almost.

The inimitable Parton is front and centre in the new, updated version of this eminently consumable and frothy production directed by Jeff Calhoun, who realised that audiences wanted to see and hear Parton in person – well, pre-recorded, at least. Her beaming smile and broad southern accent feature on the enormous clock face above the stage, from where she delivers background to characters and even sings along to 9 to 5 in the finale.

This feel-good show is a workplace revenge comedy with music and lyrics by Parton and book by Patricia Resnick, screenwriter of the 1980 movie starring Parton, Lily Tomlin and Jane Fonda. 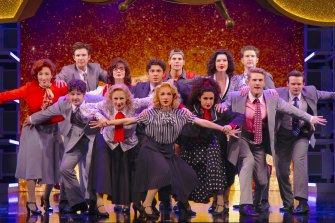 Violet, Doralee and Judy instigate a workplace coup that is no velvet revolution; suffice to say, it involves bondage, leather, chains and rat poison.

The songs bear Parton’s recognisable signature, enhanced by inspired orchestrations played by a tight band, and the toe-tappin’ hit 9 to 5, which opens and closes the show, has the crowd clapping and cheering.

The incomparable, exuberant Caroline O’Connor almost steals the show as office snoop Roz Keith, with a quirky and hilariously clownish performance of Heart to Hart, a saucy ode to Mr Hart, her unattainable idol.

Clare is vivacious as Parton lookalike Doralee, singing Backwoods Barbie with a bright country twang, while Prior shares a sweet, moving duet Let Love Grow with Ethan Jones as her younger admirer, Joe. Donovan displays her vocal virtuosity in the penultimate song Get Out and Stay Out, shifting from sweet to bold and passionate.

While celebrating female empowerment, 9 to 5 The Musical gives us licence to laugh at the critical issues of workplace bullying, sexism, inequity and corporate abuse of power. Now we get back to the serious business of change! Reviewed by Kate Herbert

THEATRE
The Comedy of Errors ★★★
Arts Centre Melbourne until July 23

The tangled, farcical narrative involves two pairs of identical twins, separated in infancy by a shipwreck, who are mistaken for each other, with madcap results. When Antipholus of Syracuse (Skyler Ellis) arrives in Ephesus with his servant, Dromio of Syracuse (Julia Billington), their lives intersect with those of Antipholus of Ephesus (Felix Jozeps) and his servant, Dromio of Ephesus (Ella Prince), leading to dizzying complications, love mismatches, imprisonments and general confusion. 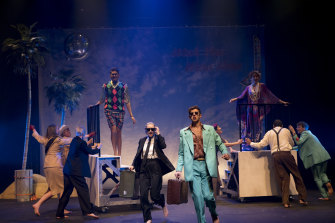 Director Janine Watson’s screwball mash-up further complicates the plot by inserting gender switches that change a male-female romance to one between two men, the Dromios’ pronouns changed from “he” to “they” to indicate their non-binary gender, the Duke (Alex King) played by a woman addressed as “she”, and a “kitchen wench” referred to as “he”.

Shakespeare’s play begins and ends with the dramatic tale of Egeon (Maitland Schnaars), father of the Antipholus twins, imprisoned under sentence of death for being a Syracusan on Ephesian soil. The play then gallops away with its comical story that resembles a Commedia dell’Arte plot.

Watson sets her whimsical production in a fanciful, tropical island version of Ephesus, adding resort palms to the ancient town on the Aegean Sea. Characters costumed (Hugh O’ Connor) in gaudy 70s shirts, kaftans and wide-lapelled suits, cavort to disco hits including Love Really Hurts Without You and Rock the Boat, perform daffy dance routines during scene changes and clout each other with balloons.

These slapstick antics are diverting and can be fun in isolation, but the separate parts do not make a cohesive whole. Watson’s interpretation of the play is patchy, sometimes incoherent and does not always serve the story or illuminate characters. The slow-motion device used for scene changes is unnecessary, and the stylised upstage dancing by actors whose characters are not in scenes is an annoying distraction from the main action. 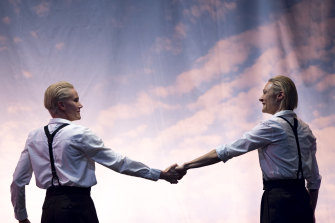 A tale of two Dromeos: farcical highlight of the Comedy of Errors.Credit:Brett Boardman

Ellis and Jozeps are effective as Antipholus brothers Billington and Prince find slapstick mileage in their Dromio roles and King is dignified as the Duke. Other performances are uneven, with several actors lacking effective vocal technique, dynamic range or credible connection to Shakespeare’s text.

This peculiar, hybrid production is entertaining and energetic but its attempt at an original, creative interpretation of Shakespeare’s comedy is ultimately inconsistent and out of balance. Reviewed by Kate Herbert

At this time of year, the icy, windswept landscape of Schubert’s song cycle Winterreise arguably resonates with Melbourne audiences. Yet by putting this classic work in conversation with the quintessentially Australian panoramas of Fred Williams, Musica Viva has imaginatively looked beyond a stand-and-deliver presentation and opened up a fascinating vista of artistic and emotional discovery. 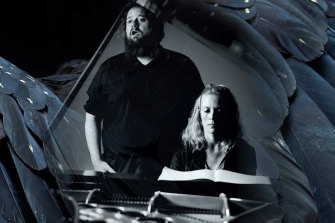 A large, angled screen helps mark out a physical and emotional space into which Clayton brings his imposing stage presence supported by a voice of luminous clarity and an extraordinary, chameleon-like expressivity.

Clayton invests his winter wanderer with a clear but complex psychological profile. Unlucky in love, he is a sensitive, misunderstood outsider, but not without a defiant streak in the face of anguish and madness. In portraying these attributes, Clayton clearly draws on insights from his long association with the role of another social misfit, Britten’s Peter Grimes.

Clayton and Golla’s richly textured (and sometimes intentionally raw) evocation of the protagonist’s journey through the natural landscape and into himself has a powerful, persuasive integrity that gets under the listener’s skin, not least when he mercilessly mocks himself in The Post, or in The Phantom Suns admits he would be better off in the dark.

Far from being a distraction, the counterpointing of Williams’ vivid paintings with Schubert’s intense miniatures underlines the universality of human tragedy, a condition indelibly reinforced by the poignancy of Clayton’s restrained but heart-rending acting.

With Clayton clearly at the top of his game and in demand across the globe, don’t miss making this unique and unforgettable winter’s journey.

Days Seem Numbered for CNN+, but Could Its Shows Live On?