The nation's domestic intelligence chief will write to all federal MPs warning they are potential targets for foreign spies looking to steal Australia's secrets and gain a foothold in the nation. 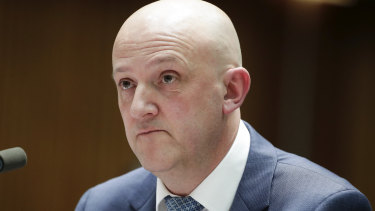 ASIO boss Mike Burgess says he will be writing to all federal MPs.Credit:Alex Ellinghausen

A foreign national based in Australia was working with a team of spies overseas to penetrate senior levels of the government by trying to cultivate relationships with individuals in the Australian intelligence community with security clearances and access to classified information.

Appearing before Senate estimates, Mr Burgess repeated his warning that there were more foreign spies and proxies operating in Australia than at any time since the Cold War.

He said he would be writing to federal MPs to offer "high-level advice on what to look for and how they should handle it".

"In the coming weeks I will write to all Commonwealth parliamentarians to warn they are attractive targets for those trying to steal our secrets and manipulate our decision-making," Mr Burgess said. "And ASIO will continue to engage with the states and territories to ensure they understand the threat and what they can do about it.

"We see evidence of intelligence services deceptively cultivating politicians at all levels of government who will advance the interests of the foreign countries."

Mr Burgess said all levels of government had been targeted by foreign intelligence agencies.

While he did not name the countries involved, security sources have previously named China as being involved in espionage and foreign interference activities in Australia.

Asked whether ASIO would now provide training to MPs to avoid being compromised, Mr Burgess said: "We haven't developed training, obviously we have turned our mind to the nature of the problem."

"Part of my writing to federal politicians is to draw this to their attention and offer some advice on how they might think about handling this problem. And of course that will start a dialogue which we and others will be involved in," he said.

Mr Burgess said the plot to infiltrate the Australian government's intelligence agencies was under way for "at least a couple of years" and was foiled by ASIO recently.

"The agents wanted sensitive information about our intelligence activities, particularly those directed at their home country," he said. "We have effectively disrupted that plot and I can confirm that no information was lost."

He said almost every sector of society was a potential target of foreign interference.

"Simply praising a foreign country, or publicly taking its side, is not of itself foreign interference," Mr Burgess said. "But when the advocacy is being covertly orchestrated by a foreign government and is contrary to Australia’s national interests, it may well constitute foreign interference."