Thirty years ago, Australia began to export Aboriginal art to major venues in the United States and Europe. Unlike earlier international forays, Dreamings (1988) and Aratjara (1993) were framed as art exhibitions, not as collections of ethnographic artefacts. 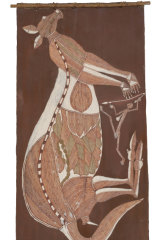 Nowadays, with China unassailable as our largest trading partner, the National Museum of Australia is repeating the exercise with the touring exhibition Old Masters: Australia’s Great Bark Artists, which has just opened in Shenzhen, after seasons in Beijing and Shanghai. Afterwards it will travel to Chengdu and Taipei in what must be one of the most comprehensive Australian museum tours ever undertaken.

If there was still a lot of ethnographic material packed into the catalogues for those landmark shows it’s because Aboriginal work was utterly mysterious to overseas audiences who needed to know who the artists were, how they lived, and what all those signs and symbols meant.

The danger was that viewers would read everything in anthropological terms, believing they were seeing living remnants of a "Stone Age culture".

Throughout the modern era the spectre of primitivism has hampered our efforts to appreciate Indigenous art for its aesthetic qualities, for its force and beauty of expression. The debates came to a head around the Museum of Modern Art’s 1985 exhibition Primitivism in Twentieth Century Art, which was widely criticised for its ethnocentric attitudes – presenting tribal art as an anonymous source of inspiration for the great European modernists.

Today we are willing to recognise the creative personalities of those artists we see as the great bark painters of the 20th century. Yirawala (1897-1976) led the way, thanks largely to the dogged efforts of his friend and patron  Sandra Le Brun Homes. Hailed somewhat fatuously as “the Picasso of Arnhem Land”, Yirawala was a powerful law man, and mentor to generations of bark painters who followed. There is an undeniable mastery and confidence about his work, which has lost nothing over time. 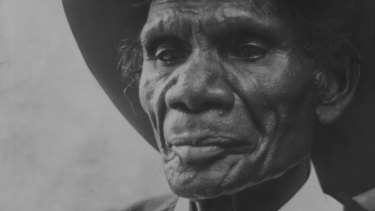 One of the greatest bark painters of the 20th century, Yirawala of Western Arnhem Land (about 1897-1976).Credit:ABC TV Collection, Northern Territory Library

Then there was David Malangi (1927-99), who became known as “Dollar Dave” after one of his paintings was used on the Australian one dollar note in 1966, without his knowledge or permission. This led to a moment of realisation that such pictures were the work of individuals, not the anonymous emanations of some race or tribe.

There’s not much point in writing critically about individual works. The show consists of 120 pieces carefully selected from the NMA’s holdings of more than 2000 classic barks. The best of them contain their own cosmologies, their own complex stories. They are undeniably works of art, but works imbued with a deep spirituality that is not susceptible to outside value judgements. I could say I prefer one painting over another, but this would prove nothing about the success or failure of a piece within Indigenous culture. 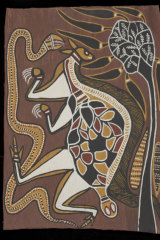 Totems of the the Manharrnu, Mortuary Rites, 1966 by David Malangi of Central Arnhem Land.Credit:National Museum of Australia

There is a certain irony in one of the world’s oldest living art-forms being shown in a city that is celebrating its 40th birthday this year; and a double irony in Aboriginal culture being celebrated in one of the planet’s fastest-growing metropolitan zones. Within four decades, Shenzhen has become an urban fantasia of skyscrapers and freeways, with a population of 12.5 million. Last year, Maningrida, a leading centre for bark painting in Arnhem Land, had an itinerant population of 2300.

In China on other business, I flew down to Shenzhen to catch the exhibition, curious to see how local audiences were responding to such radically unfamiliar work.

It’s better to see than to ask, because Chinese official contacts tend to be polite, formal and uninformative. Everyone wants to make a positive impression while avoiding the slightest risk of saying or doing the wrong thing. Interviews usually require prior approval, with questions submitted in advance. This is a depressing fact of life in China today under a government that has a pathological need to control information flows.

The Shenzhen Museum itself is a mixture of old-style educational material in glass cases, and historical presentations steeped in propaganda. The presiding deity is not Mao Zedong, but Deng Xiaoping, whose market-driven policies brought the city into existence. The second great presence is the current leader-for-life, Xi Jinping, whose image and thoughts dominate the final rooms of the permanent display.

The return of propaganda is one of the less agreeable aspects of life in the prosperous, busy nation that is China today. In Shenzhen even the Design Society, the sophisticated new museum designed by Fumihiko Maki that opened at the end of 2017, is now embellished on one side with a huge hammer and sickle.

One could hardly imagine a less ideologically charged exhibition than Old Masters, in which every work reveals a relationship to the land that dates back beyond the dawn of recorded history. The unchanging lifestyle of Aboriginal people and the longevity of their Creation stories stand at the opposite end of the spectrum to the revolutionary ethos that provides a creation myth for modern China. It could be argued this makes Old Masters a very "safe" sort of touring show, but there must also be some benefit in showing Chinese audiences work that denies ideas of progress, portraying past, present and future as a single continuum. 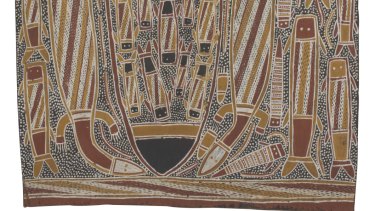 In contrast to the booming commodity culture of today’s China, these works were created by artists with few materialistic concerns. Even with specially commissioned pieces, money was never the motivation. The spiritual and traditional underpinnings are obvious, but the artists were also eager to spread knowledge of their way of life to non-Indigenous people. They are requests for understanding and respect.

In Shenzhen, rather than rely on official responses and local media, it was more revealing to spend time in the gallery, observing groups of teenagers wandering through the show. They seemed genuinely engaged by the work, pointing fingers and snapping photos. A room of photographic portraits of the artists was a big talking point, as might be expected in a country dominated by a single ethnic group, the Han.

It’s not so long ago that Aboriginal people were seen as just as exotic by their pale-skinned countrymen. It’s art that has helped break down those barriers, as Australians have begun to realise the uniqueness of Indigenous culture and to feel a distant sense of pride. We can only hope the Chinese – whose own culture stretches back thousands of years – will be quick to appreciate a tradition that values the eternal over the merely marketable.

Dior! Tiffany! Inside Kylie Jenner's Super-Luxe Shower for Baby No. 2

With a 2023 Slate Hobbled by Controversial Stars, Warner Bros. and DC Stick to 2022 Titles in Muted Comic-Con Appearance