One Melburnian has been caught driving to Wodonga for a McDonald’s Big Mac, while another travelled to Ballarat to get some "fresh air" in brazen breaches of lockdown restrictions.

"Can I be really clear, just in case there is any doubt at all, that there is absolutely no reason or need to drive from Melbourne to Wodonga to have a Big Mac." 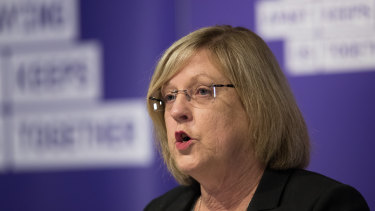 "If you are thinking of using back roads or getting around these walls, Victoria Police will be there."

"There are significant penalties and we are looking at whether we need to change any of those penalties," he said.

"There are options available to us whether it be on-the-spot fines, versus fining people through the courts (that is a much bigger fine), but there is a balance to be struck there and we will find that balance."

Victoria Police issued 168 fines on Saturday. Thirty-one people were fined $200 for failing to wear a mask and then refusing to accept a mask when offered one by police.

Partygoers were also caught at Airbnb apartments on Franklin Street in the CBD and on Dudley Street in West Melbourne.

Ten people were fined at the West Melbourne address at 11pm after police received noise complaints. Two people were found hiding in a bathroom when officers arrived.

At 2am on Saturday, officers found five people in a short-stay apartment on Franklin Street, with "some attempting to avoid police detection by hiding in a closet".

Victoria Police Deputy Commissioner Rick Nugent said police would have to continue to man road checkpoints at 2am in freezing conditions because of a group of "blatantly selfish" individuals.

"What we're seeing is too many individuals who are going about their lives as if this pandemic doesn't exist," he said.

"We don't want to be giving out fines for these sorts of things. There's a whole heap of activities we'd rather be doing, like engaging with and working with the community to keep them safe."

Eighteen infringement notices were handed to motorists stopped at checkpoints on Friday and in the early hours of Saturday morning.

More than 24,761 vehicles have been stopped by Victoria Police at checkpoints on arterial roads since the Melbourne lockdown began.