Home » Lifestyle » A massive chimpanzee is coming to Melbourne

Think you spotted a giant monkey climbing the Arts Centre? You won't be seeing things. Next month, a massive, nine-metre-high chimpanzee will perch on the distinctive yellow spire high above the St Kilda Road institution. 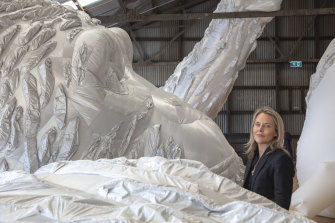 Artist Lisa Roet with the work in progress of chimp David Greybeard.Credit:John Gollings

He is modelled on the real-life chimp David Greybeard, who primatologist and anthropologist Jane Goodall studied in Africa in the 1960s. Her subsequent findings rocked the scientific community and changed everything we thought we knew about these animals. 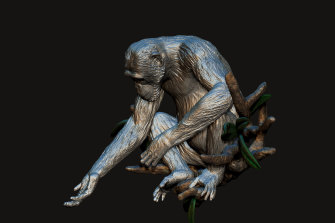 Greybeard was the first chimp Goodall was able to observe up close over an extended period of time. At the Gombe Stream National Park in Tanzania, she was able to gain his trust, a major breakthrough in itself. When she saw him using tools fashioned from grass and twigs, it dispelled the idea that only humans were capable of such activity. What was thought to be a key differentiator between the human race and our closest animal relation was no longer. She also witnessed chimps showing emotion and empathy, compassion and respect for their elders.

Greybeard represents a massive turning point in how we see ourselves, according to the sculptor's creator Lisa Roet. "We are apes, many people don’t understand that," she says.

Melbourne-based Roet was asked by the Jane Goodall Institute to create something for the pioneering scientist's 60-year anniversary. The idea was to raise awareness about the environment, sustainability and the protection of animals and their habitat. 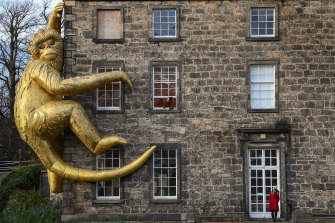 "I thought it was a great time to highlight not just Jane – who was the impetus to my career – but extinction and deforestation," Roet says. "It’s a global issue we’ve all got to deal with … Australia has the biggest rate of species extinction, so it's very much on our doorstep."

Roet has made a career of arts activism, studying animals and making art with them as the focus and, more recently, making super-sized sculptures of them. Last month, her 14-metre-high golden monkey was installed on the exterior of Inverleith House in the Royal Botanic Garden in Edinburgh; it had previously scaled skyscrapers in Beijing and Hong Kong.

In 2016, she controversially created a work called Heart Beat, based on footage of her own heart, taken when she underwent an MRI, and footage of a gorilla’s heart. “It’s really about the body and soul. It’s about the primal side of mankind and the humanness in the ape.” 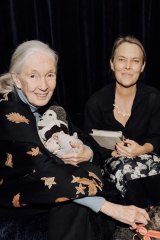 Created using an inflatable finely spun metallic material by Melbourne studio Airena, Greybeard appears to be cast from metal. Roet hand-stitches the fur texture onto the sculpture to ensure it looks as life-like as possible. She has been working on the piece in Williamstown during shutdown and, after many date changes, is excited to see it installed next month.

Greybeard's pose, with his hand outstretched, is remarkably human, a reminder that we are not so different. For Roet, that was a no-brainer. "The chimp is the mirror to the human," she says. "All human blood types are shared with chimpanzees."

How much will Thanksgiving turkey dinner cost to cook?