One boy may have made a remarkable prehistoric discovery during his vacation in North Myrtle Beach, South Carolina.

Xander, a 5-year-old from Virginia, found what appeared to be a rather large tooth that measures 3.25-by-2.25 inches in the sands of Ocean Creek Resort on Tuesday, according to his mother Kelly Buck.

“Our whole family loves hunting for shark teeth,” Buck tells Fox News. “Xander and my husband were searching in the swash during low tide when Xander spotted this one in the mud.” 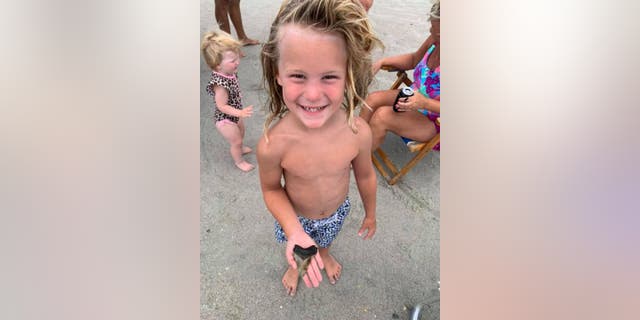 Xander, 5, found a rather large tooth that measures 3.25-by-2.25 inches during his recent trip to North Myrtle Beach, S.C. His mother Kelly Buck tells Fox News that fossil identification enthusiasts on Facebook have told her it looks like a megalodon tooth.
(Kelly Buck)

She shared photos of Xander’s find in two Facebook groups dedicated to identifying fossils including, “Bone and Fossil Identification” and “What’s it Worth? Fossils, Shark’s Teeth & Bones.”

MEGALODON FOSSILS DISCOVERED ALL OVER THE WORLD

Hundreds of members from the two groups believe the tooth belonged to a megalodon – a long-extinct shark species that lived during the Early Miocene to Pliocene Epochs roughly 23 to 3.6 million years ago.

Megalodons stand out from other sharks as the largest known species to have inhabited earth’s waters. According to Britannica, most researchers believe megalodons measured between 33.5 and 58.7 feet in length, but some theorize it could have grown as long as 82 feet. 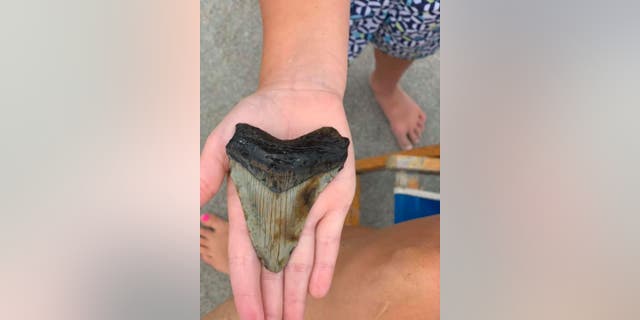 Xander’s mother Kelly Buck says the family intends to keep the tooth and would like to learn more about it from a fossil expert.
(Kelly Buck)

While the Buck family intends to keep the tooth Xander found, his mother says they’d be open to getting more information from a museum or archaeological expert.

“Xander was ecstatic about the find. He is an avid shark tooth ‘hunter,’ he’s been finding teeth for about 2 years now – completely on his own,” Buck wrote to Fox News. “When he found the tooth, he knew exactly what it was. It is by far the largest tooth we’ve ever found. He wants to make it into a necklace but we will probably mount it or put it in a frame.”