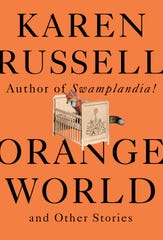 In search of something good to read? USA TODAY’s Barbara VanDenburgh scopes out the shelves for this week’s hottest new book releases.

What it’s about: The Pulitzer finalist and beloved author of “Swamplandia!” and “Vampires in the Lemon Grove” is back with a new collection of short fiction written in her trademark comic, vivid and mesmerizing voice. The premise of the title story alone has us intrigued: A new mother, desperate to protect her infant, strikes a deal to breastfeed the devil in exchange for protection.

The buzz: Kirkus Reviews raves, “Russell’s third collection beckons like a will-o’-the-wisp across the bog, with eight crisp stories that will leave longtime fans hungry for more.”

2. “Disappearing Earth,” by Julia Phillips (Knopf, fiction, on sale May 14)

What it’s about: Two sisters, ages 8 and 11, make the dreaded mistake of accepting a ride from a stranger, and a beautiful August day at the beach turns into every mother’s worst nightmare – the Golosovskaya sisters vanish without a trace. The beautiful, unexpected story that follows paints a portrait of the lives of women in the far-flung reaches of Russia.

The buzz: “This novel signals the arrival of a mighty talent,” promises a starred review in Publishers Weekly.

3. “The Apology,”by Eve Ensler (Bloomsbury, nonfiction, on sale May 14)

What it’s about: Playwright Eve Ensler exposes the origins of her famed play, “The Vagina Monologues,” by assuming the voice of her father, Arthur, who she says molested, raped and abused her throughout childhood. “The Apology” is more than a reckoning with a man long dead; it’s a healing exploration of how survivors can recover from sexual abuse.

The buzz: Publishers Weekly calls it a “bold, brutal, and ultimately healing narrative.”

What it’s about: It’s impossible, perhaps, to succinctly summarize a novel steeped in English folklore, with a character like the mythical spirit Dead Papa Toothwort, who wakes from his slumber to listen to the goings-on of his picturesque village and especially one artistic little boy named Lanny – who goes missing. Suffice to say, it’s a striking work of experimental fiction and a fine follow-up to Porter’s “Grief Is the Thing With Feathers.”

The buzz: In a starred review, Publishers Weekly says, “This is a dark and thrilling excavation into a community’s legend-packed soil.”

5. “Bottle of Lies: The Inside Story of the Generic Drug Boom,” by Katherine Eban (Ecco, nonfiction, on sale May 14)

What it’s about: Generic drugs are supposed to be identical to their name-brand counterparts and, we’re assured, entirely safe. But are they really? Eban tells a different story of the global generic-drug boom, drawing on accounts of fraud and falsified data from whistleblowers, regulators and confidential FDA documents.

The buzz: Eban is an award-winning investigative journalist, and her latest book is the product of a decade-long search for the truth behind generic-drug manufacturing.