International airlines, their staff and airports will be given another $183.65 million to tide the sector over until March in a sign the industry will still need significant help even if overseas flights resume around Christmas.

Qantas and Virgin have said they hope international travel will resume by the end of the year, a development Deputy Prime Minister Barnaby Joyce said was getting closer as vaccination rates rise. 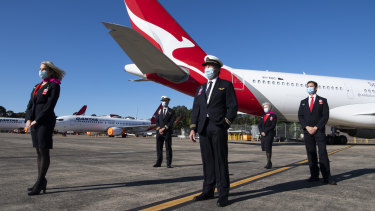 Qantas’ international flying has been almost entirely paused during the pandemic, except for some essential repatriation and goods flights.Credit:Louise Kennerley

The money will cover an extension of the government’s $750 weekly payments to cabin crew and pilots of international airlines, primarily Qantas, that largely cannot fly. It was set to end in October but will now run until March.

It is intended to ensure the industry doesn’t lose its capacity to operate before borders reopen. Airports in 11 cities will also get a share of $64 million to pay for the costs of screening passengers and baggage, which is a constant cost regardless of how many planes land and passengers go through screening.

Mr Joyce said aviation was essential to ensuring the economy could recover.

“As a driver of so many sectors of our economy, it is essential that the industry is ready to ramp up operations when international restrictions are eased,” said Mr Joyce, who is also Aviation Minister.

“It’s also important that the sector continues operating now, to maintain the flow of exports and imports and bring Australians home from overseas.”

The airports that will get the money are in Sydney, Melbourne, Brisbane, Perth and seven other cities. Qantas has previously said it plans to restart international flying beyond the New Zealand travel bubble by December 20 this year. Virgin Australia has also called for international flying to resume by Christmas.

Monday’s announcement takes the total amount of federal support for the industry to $5.1 billion through an array of programs since the pandemic began, but ground services companies that fuel, load, move and clean planes have been furious that they have been left out.

The sector has warned flights could be cancelled when travel resumes because, its industry body argues, it may not have enough staff to get planes in the air and passengers on board. The sector’s staff are eligible for $750 weekly coronavirus support payments in the same way as other workers, however.

“Hundreds of airline flights will be grounded this summer because thousands of critical aviation ground operations workers are leaving the industry,” an industry spokeswoman, Ann Maree Jackson, told a senate inquiry earlier this month.

A spokesman for Mr Joyce said the government was continuing to listen to industry and others and reviewing its pandemic response measures. He said having airlines ready to resume flying would have flow on effects for industries including aviation ground handling.

Source of deadly outbreak at The Alfred may never be known: hospital chief

Workaholic Beck: “I feel a little guilty if something’s too easy”