A WOMAN has revealed how she enlisted the help of her thrifty DIY dad to give her under-the-stairs space a total makeover for just £65.

Courtney Jane, 25, from Cheshire admitted that the under-the-stairs space was a ‘complete dumping ground’ after she moved into her first home with her boyfriend Ethan recently. 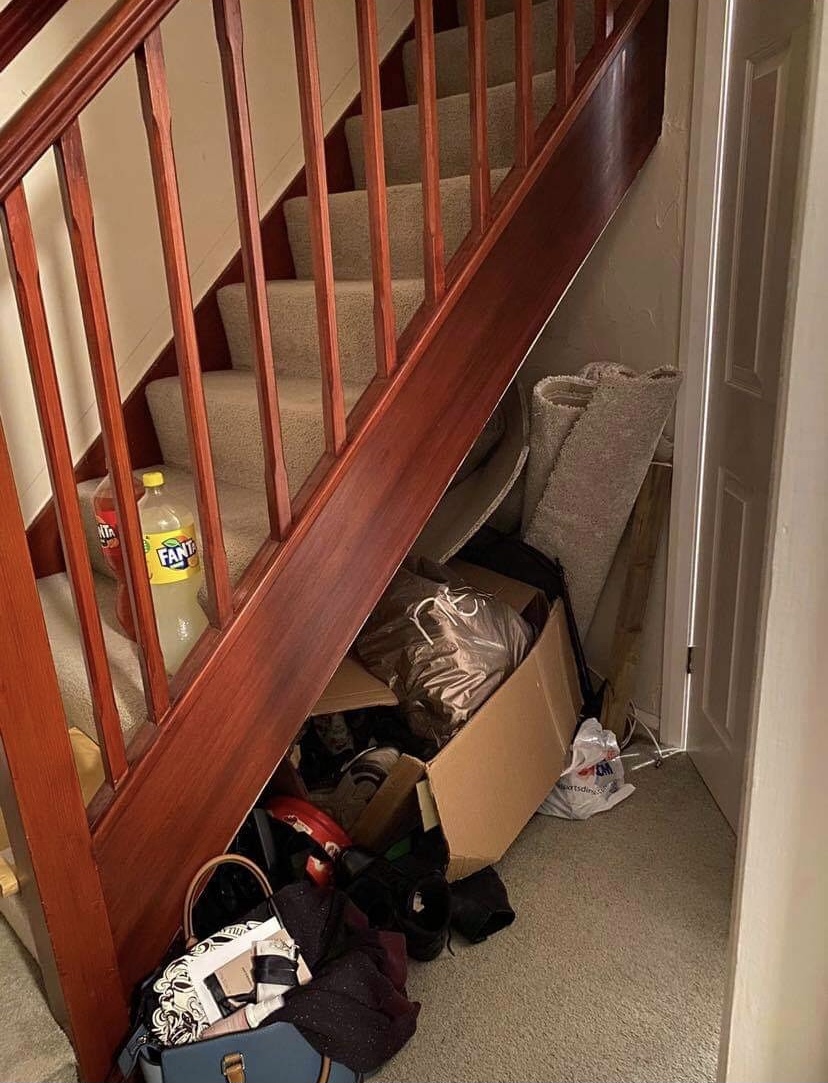 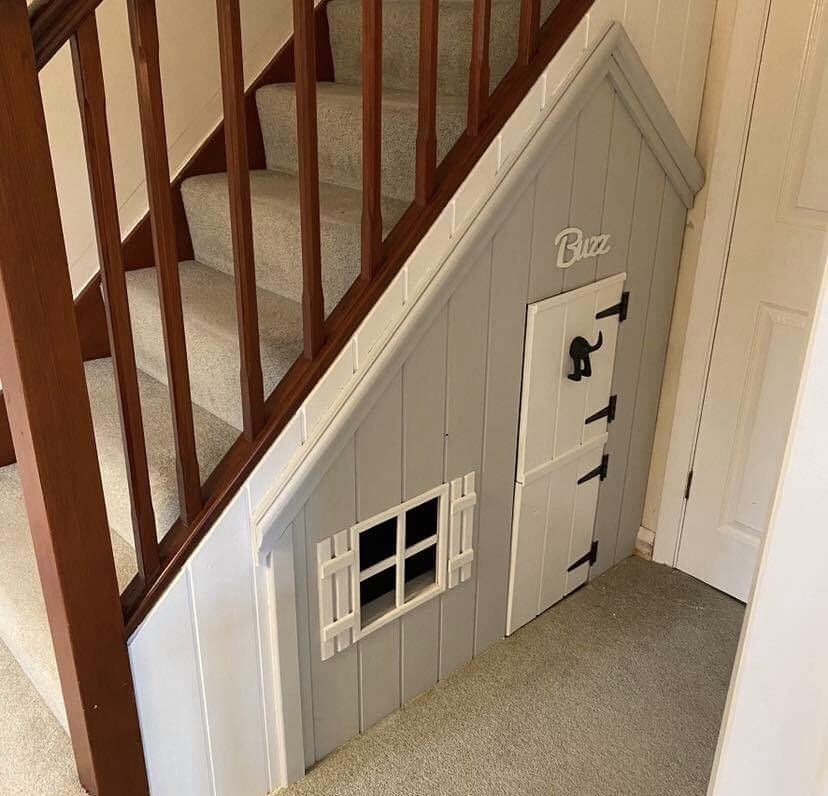 But the couple were keen to turn the space into a cosy dog house for their new puppy Buzz – so persuaded Courtney’s dad to help with the transformation.

Courtney, who works as an Emergency Service Worker, shared the incredible makeover on Facebook, writing: “Tomorrow is the day we are picking up our puppy Buzz.

“I just NEEDED to show you all the amazing house my dad has built for him under our stairs!”

The post instantly raked up over 600 likes and comments with strangers praising the clever use of space. 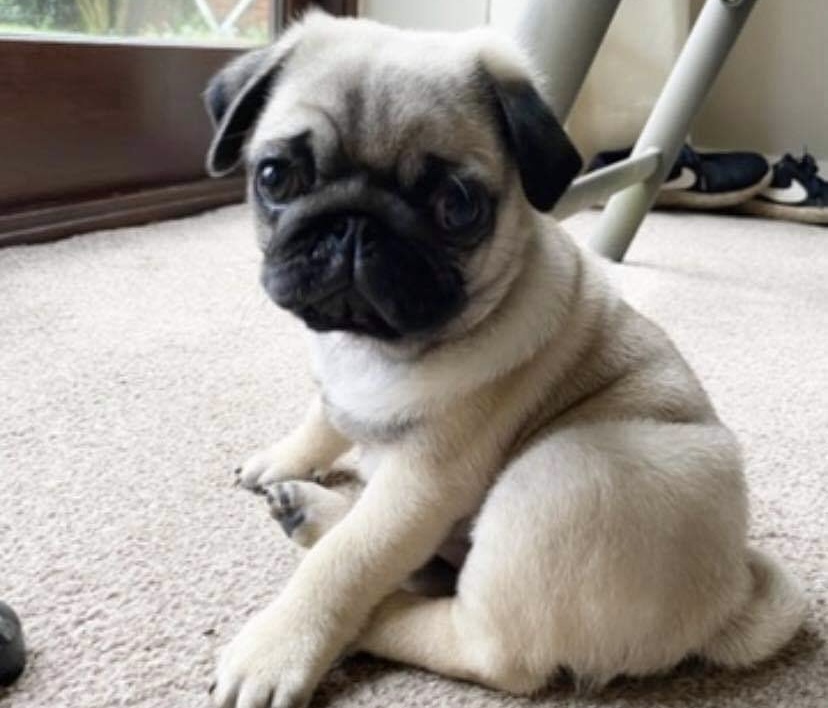 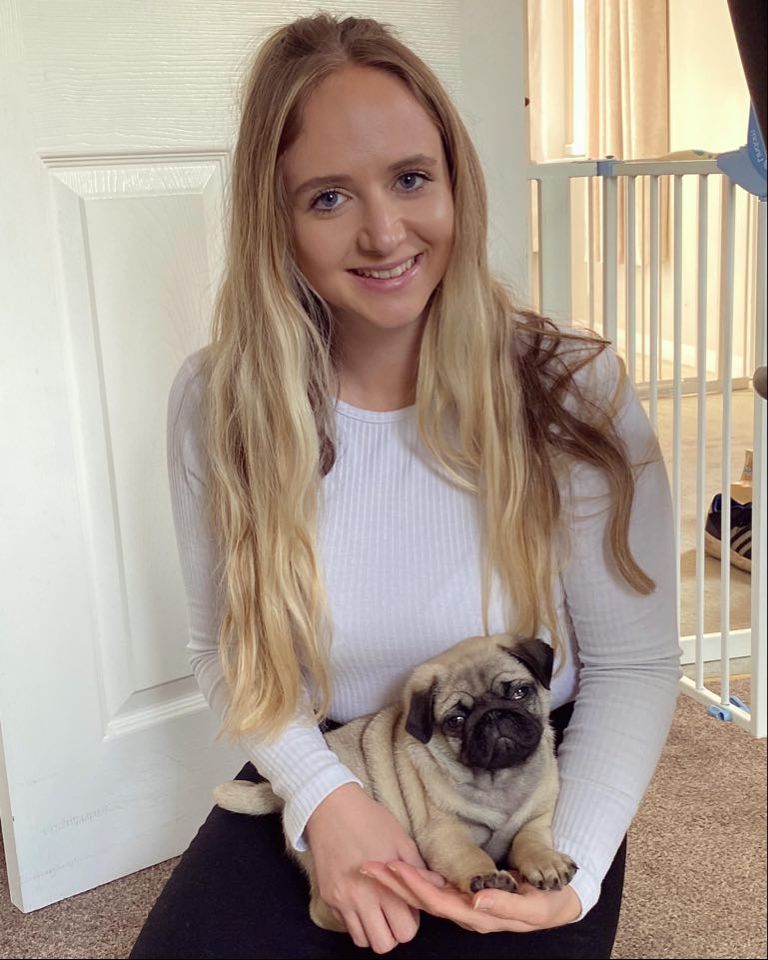 Courtney said the under-the-stairs space had become a ‘dumping ground’ for their things after the couple moved into her first home.

But they were keen to give their new puppy a stylish and cosy home – where he could play, nap and sleep.

Luckily the project has been a success and Courtney said their dog ‘loves’ his new home – and didn’t even cry when they first introduced his cosy area.

She said: “Myself and Ethan only recently moved into our first home together, so the under the stairs was just used as a complete dumping ground. 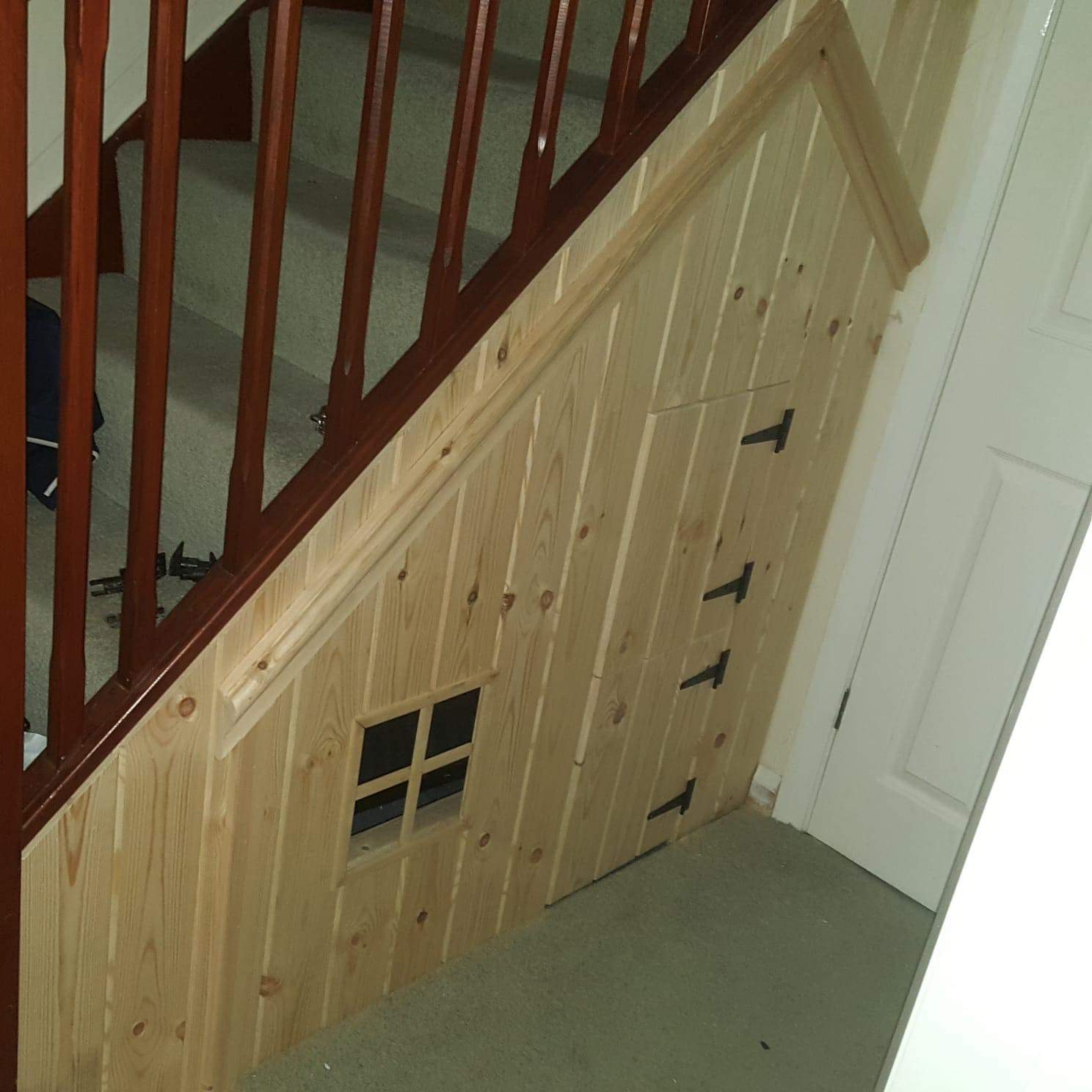 “There was everything from the hoover, to rolled up bits of carpet under there!

“My dad creates home wooden items so after a bit of persuading he agreed to create us our very own dog house under-the-stairs so that Buzz would have his own safe space.

“When we decided on getting a puppy I really wanted him to have his own safe space where he could go to play, nap and then sleep over night.

“Me and my dad began talking and came up with the idea of creating his own little dog house under-the-stairs.”

Courtney said the whole makeover cost less than £65 and two days to turn the space into a modern grey and white dog home – getting rid of the bits of carpet and hoover from the area.

Her dad, who runs Rustic Living Homeware, only spent a day putting the pieces of wood together while Courtney focused on the painting and decorating.

The father-and-daughter duo began by measuring the space and coming up with the design – which they said was the most challenging part of the DIY project. 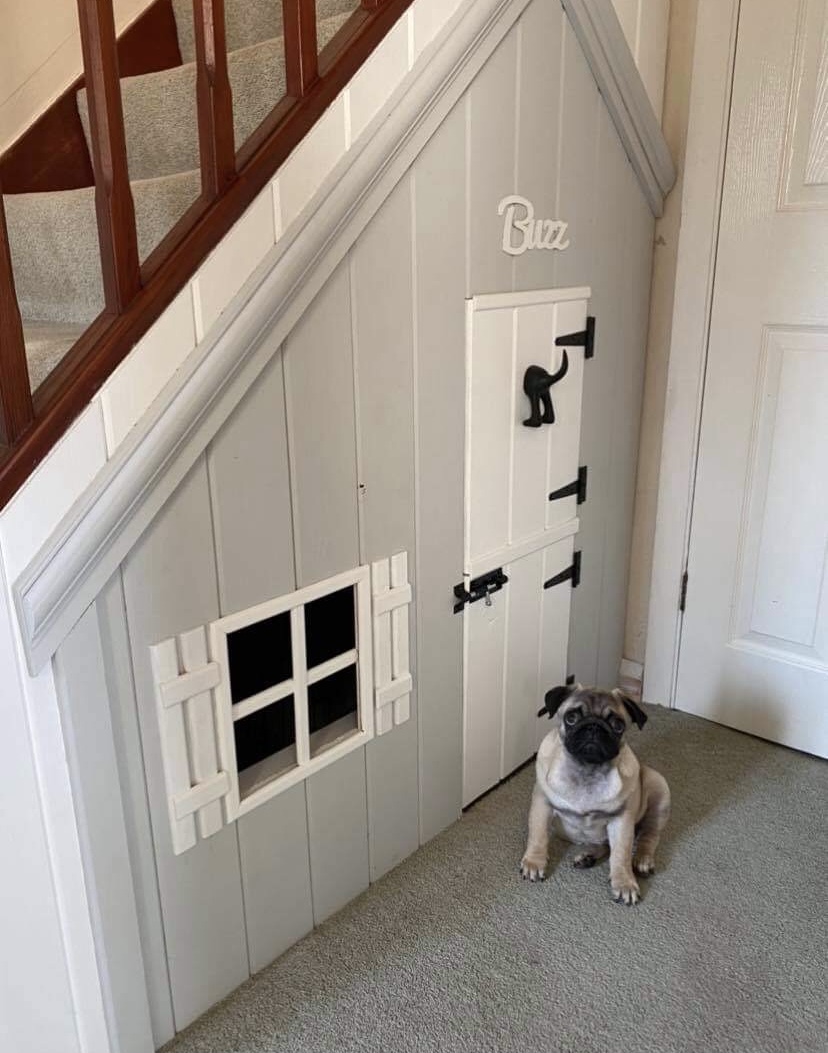 Courtney added: “Once we had ordered the wood, my dad built the frame for it all to be attached to.

“He then installed the wooden panelling, cutting out a window and space for the door. He then made a window frame and window shutters, along with making the stable style door.

“He then added more wooden panels to give a roof effect. He then attached the hinges for the door and placed the stable door in position.

“Once it was assembled I painted the house – painting the base of the house in grey and then the outline, door and window in white.”

Courtney purchased a personalised wooden sign from eBay for £6.50 and painted it white to match the decor of the new dog house.

She glued it above the door and then attached the dog tail hook (which was £1 from Ikea) onto the middle of the door to look like a door knocker.

The whole makeover cost less than £65 – the wood cost £50 from a local timbers yard and they picked up the hinges for £5 from a local DIY store.

She said: “The hardest part of the whole transformation was definitely just coming up with a design which would fit the space and also creating a stable door.

“I really have no idea how much this would have cost us if we would have asked someone else to build it, I would expect a few hundred pounds at least.

“But it’s not only the money that we’ve saved – we love that my dad has created it for us, it makes it all that more special.” 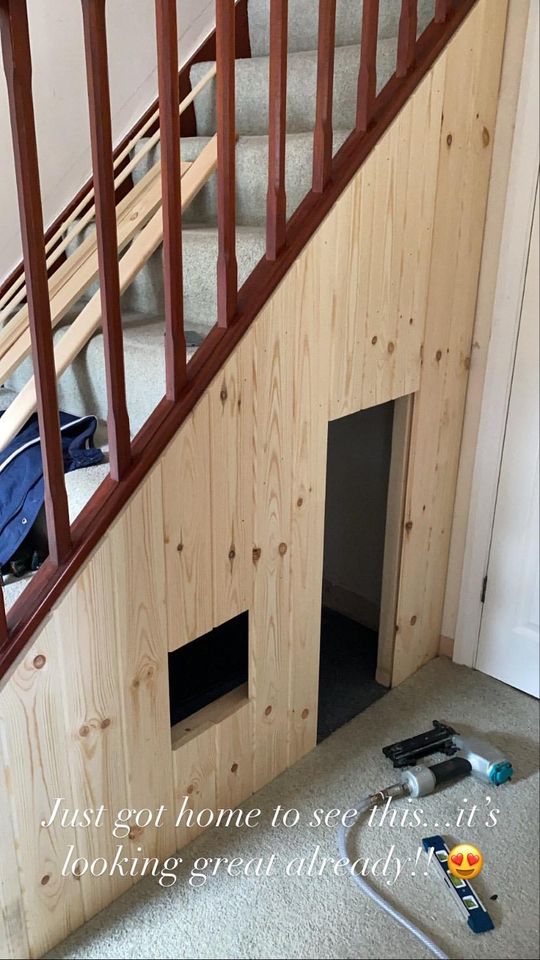 She said she was “amazed” when she first saw it and couldn’t wait to pick up her new puppy and show him his new home.

Courtney, who has been sharing her first home journey on @_homewithcourtney, said she was overwhelmed when people on social media started to reach out about the project.

She said: “I was absolutely amazed by it when I first saw it and once it was all painted and had the finishing touches added.

“I couldn’t believe how great it looks – I absolutely love it!

“The response has been incredible on social media, I’ve had a lot of messages from people saying they’ve been inspired to build their own which is amazing.

“And unlike Harry Potter, Buzz loves his home under-the-stairs.

“He puts himself in there when he wants to have a nap or a chill out and he sleeps in there every night, he hasn’t cried once in it.”

One gushed: “Living the dream – I wish I had the space!”

While another shared: “That’s gorgeous. Incredible job by your dad. Think he’ll be super busy now.”

A third added: “Beautiful… hope your puppy doesn’t chew like ours did.”

In other DIY news, this mum pimped her daughter's Little Tyke car into a rose gold ride.

And a DIY fanatic completely transforms three-bed house in three weeks & did it on the cheap thanks to Dunelm & Ikea bargains.

Plus we reveal the best home transformations you can do for under £30, from hotel-inspired bathrooms to stunning kitchen makeovers.

Target Shoppers Say This $20 Bra Is So Comfortable, You’ll Forget You’re Wearing It