Home » Fashion » Woman in hysterics over man's 'lazy' attempt to Catfish her – but can YOU spot what's wrong?

10 YEARS ago, catfishes were just a rare breed of bottom-dweller and internet dating was more or less in its infancy.

But fast forward a decade and "Catfishing" (where someone creates a fake internet identity) is increasingly commonplace online – ESPECIALLY on apps like Tinder and Bumble. 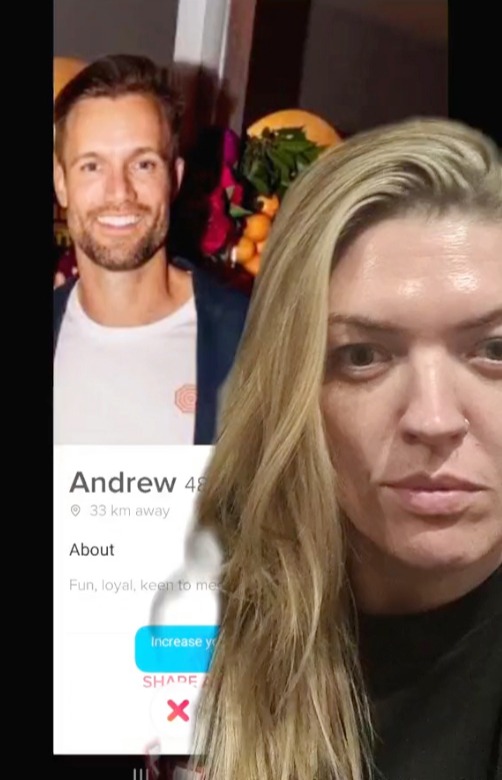 But while most Catfishes go to great lengths to cover their tracks, one man has been called out on TikTok for his VERY "lazy" attempt.

At first glance, the man's profile doesn't raise any red flags – he had a selection of photos, filled in his age and described himself as "fun and loyal" in his bio.

But on closer inspection, Tanith found something that instantly exposed him as a Catfish – so can YOU spot it? 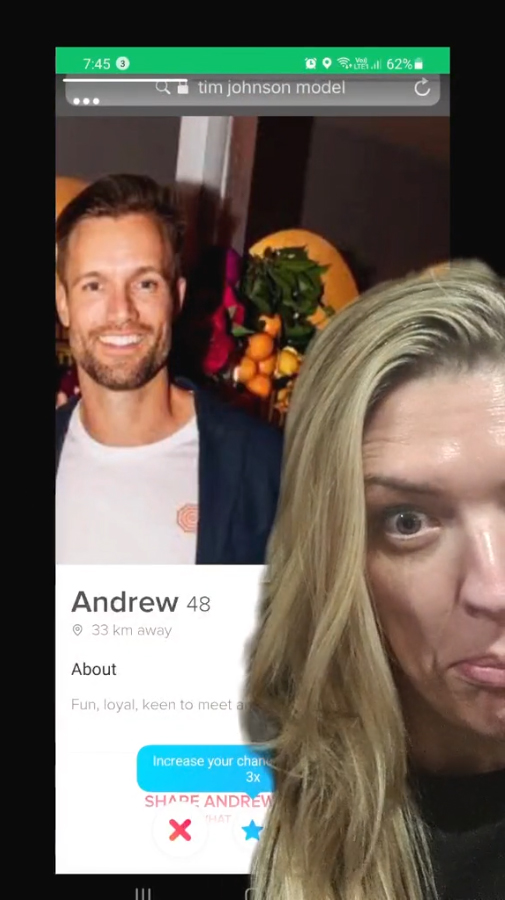 Captioning her video "How NOT to catfish 101", Tanith exposed "Andrew" as a fraud when she spotted a rather suspect Google search at the top of his photo.

That's right, the unlucky-in-love man had simply searched "Tim Johnson model" on his browser, taken a screenshot of the image and posted it on his fake Tinder profile.

Unsurprisingly, the clip has racked up over 31,800 "likes" on TikTok and left viewers in hysterics too.

'Catfishing' is when someone creates fake profiles on social media sites to trick people into thinking they are somebody else.

It is most common on social media and dating apps like Tinder.

They make up life stories and use photographs of unsuspecting victims to create fake identities. Catfishers add life experiences, jobs, friends and photographs to the fake accounts.

The term was first used in the 2010 documentary 'Catfish' – in which Nev Schulman discovered the gorgeous woman he fell in love with online was a middle-aged, married mum.

"This has killed me," one replied. "Outright dead."

Another added: "And at least put someone who looks 48!!"

"Saw one once using an actor's photos from Instagram," a third wrote. "A shot of his 'friends' was the cast of a show that included Aaron Samuels from Mean Girls!"

Meanwhile, a fourth joked: "Imagine this really is Tim Johnson and he Googled an image of himself because he didn't it in his phone and forgot to crop… you never know!"

For more relationship stories, this sexpert revealed how to do-over terrible sex & turn it a mind-blowing experience.

And this sex doctor revealed her bucket list of things you HAVE to try this summer – from skinny dipping to outdoor romps.

Plus this dating expert revealed the ideal way to ask a woman out & every bloke should watch it.

Woke or Not, the Caftan Is Sexy

Under Armour to Reduce Size of Global Headquarters by 40 Percent

Mum shows how she got tarnished, blackened jewellery sparkling in seconds by using a tiny bit of bicarbonate of soda