Home » The Proposal Was Real, the Medical Emergency Not So Much

If the April 16 ruse Michael T. Matthews concocted to convince his girlfriend, Amy Marshall, that she would have to deliver a baby on a median at 108th and Broadway demonstrated anything, it was that he knows her well.

“Never once has Amy run into a medical emergency in New York where paramedics weren’t already helping,” he said. He staged one because he was certain she would spring into action. Also because getting her into rescue mode freed him to surprise her with a proposal, complete with cheering New York City firefighters.

Mr. Matthews’s ability to predict Ms. Marshall’s behavior did not happen overnight. But his insight into her character was already building in 2018, a few months after they met at Lincoln Square Seminary, the Manhattan seminary where Mr. Matthews taught teenagers a religion class. Ms. Marshall’s then 15-year-old son, James Mckay Marshall, was a student. After Ms. Marshall texted Mr. Matthews midsemester to ask whether James was paying attention, they became fast friends.

“She had asked whether he puts his phone away during class,” he said. “I’m generally a defender of the students, so I said, ‘Well, I could see he was trying.’” Ms. Marshall sensed this response was pure diplomacy and she texted back, calling her son a harsh name that took his teacher aback momentarily. Then, he said, “I burst out laughing.”

That was spring; by summer, they were hanging out at a New Jersey summer camp in Hope, N.J., where both served as youth leaders for 60 high school girls. Mr. Matthews would soon became confident enough in his assessment of Ms. Marshall’s personality to write her online profile for Mutual, the Church of Jesus Christ of Latter-day Saints dating app. 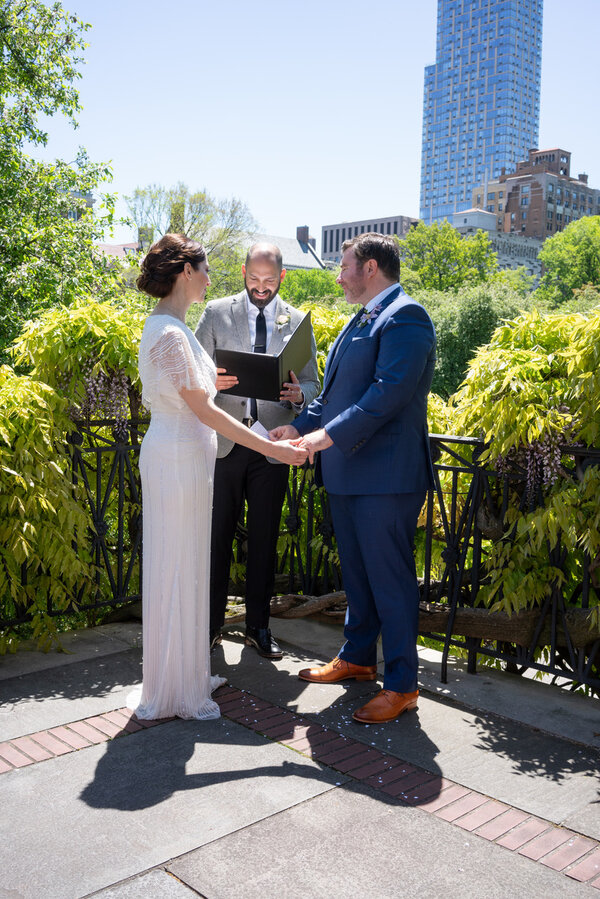 Ms. Marshall and Mr. Matthews, the founder of the Mobile Culture, a social media marketing company, both live on Manhattan’s Upper West Side. Ms. Marshall, 45, is divorced and has three children. Mr. Matthews, 42, has never been married. His reluctance to date her was professional. “I thought of her as James’s mom,” he said. But then he started checking out her suitors on Mutual. “I got depressed for every woman out there,” he said. “Like, this is what they have to choose from? It made me feel attractive.”

By October, his feelings for her had turned a corner. “She’s beautiful, and we have the same values,” he said. “I realized I was attracted to her.” At their first date that month, to a space film neither remembers, “things got cuddly,” Ms. Marshall said. “From that moment on, everything changed.”

But not to the outside world. “We kept everything very secret,” Ms. Marshall said. “We didn’t hold hands for a year, I think because I wanted to make sure it was serious before I told my kids.”

By the end of 2019, Ms. Marshall’s children had figured out the nature of the relationship (they approved). The next year, during the pandemic, the couple started talking about marriage.

When they set a May 2021 wedding date in January, she hadn’t heard the words “Will you marry me?” Mr. Matthews still hadn’t proposed months later when he scheduled an April 16 engagement photography session. Ms. Marshall agreed to the shoot anyway.

And then, on the way, she was ambushed. The pregnant woman Mr. Matthews enlisted to fake labor was the cousin of one of Ms. Marshall’s colleagues. The fire department (F.D.N.Y. Battalion 11 Engine 76 & Ladder 22) participated on the condition that if they were called away for a real emergency, the gig was up. Ms. Marshall already had latex gloves on and was prepared to deliver a baby when she understood she had been duped. By then, Mr. Matthews was on one knee behind her with an engagement ring. “The adrenaline was pumping,” she said. Through her exasperation, she said yes.

On May 6, Mr. Matthews and Ms. Marshall were married by Mr. Matthews’s best friend, Brent Thurgood, a Universal Life minister, in the Conservatory Garden at Central Park. Fifty guests attended.

“The great thing is that 90 percent of them were fully vaccinated,” Mr. Matthews said later. Had any of them required medical treatment even so, they were probably in the right place.

Christie Brinkley, 66, Slays In $450 Fendi Bikini & Short Shorts As She She Vacations In Turks & Caicos

‘If you are not addressing climate change, you will be irrelevant’