A new generation of red carpet stars trod the well-worn, soft pile path of Cher, Cate Blanchett and Angelina Jolie to deliver greater diversity across race, gender and style in 2021. The post-lockdown comeback of extravagant event dressing was delivered in a manner that spoke to revelry rather than revolution.

Meet the red carpet risk-takers who were the repositories of our fashion fantasies in the past 12 months. 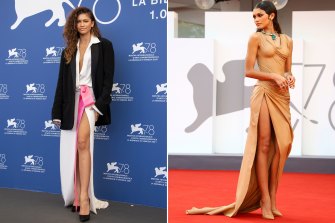 Zendaya in Valentino and Balmain promoting the movie Dune at the Venice Film Festival.Credit:AP

Bow down to the queen of the red carpet in 2021. The Spider-Man: Far From Home and Dune star turned every red carpet into her personal runway on the promotional circuit for both blockbusters.

White the willowy 25-year-old’s figure-hugging Balmain couture dress at the Venice Film Festival drew gasps, it was her appearance in Valentino at the same event which ticked every box. There is an ease to the way Zendaya wore the oversized black jacket with a maxi-shirt dress that stood out, compared to her successful attempt at outdoing the Kardashians in the leather nude-illusion stakes. 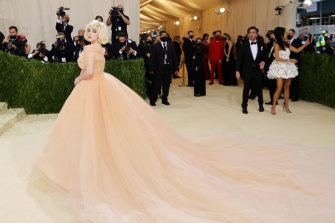 Pop singer Billie Eilish turned The Met Gala into her coming out party wearing a nude tulle Oscar de la Renta dress. The strapless dress was based on a black gown Marilyn Monroe wore to the Oscars in 1951 and Eilish leaned into the inspiration with a ’50s-inspired blonde bob.

Since the appearance, Eilish has returned to her favoured boxy silhouettes, but it was difficult not to smile while watching the singer commit to her fashion fantasy for one night.

Catherine, Duchess of Cambridge
No Time To Die premiere, London 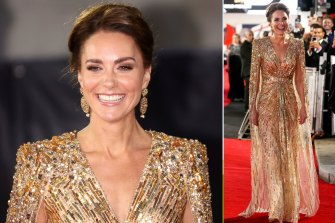 Bond Girl: The Duchess of Cambridge at the London premiere of No Time To Die wearing Jenny Packham.Credit:AP

Since the Duchess of Cambridge started holding hands with Prince William she has always dressed appropriately, with an eye to looking polished and not upsetting the in-laws, but in a gold Jenny Packham gown at the premiere of the latest Bond film, the Duchess finally mined hidden depths.

The perennially blow-waved tresses were elevated into an extravagant up-do worthy of a Bond girl, paying subtle tribute to the late Dame Diana Rigg in On Her Majesty’s Secret Service, while the gown’s gold embellishment showed a willingness to take centre stage. 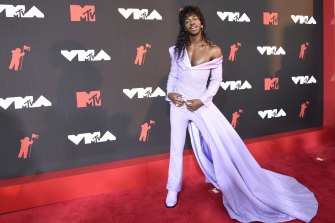 Actor Billy Porter’s monopoly on gender-bending red carpet appearances was broken by singer Lil Nas X in 2021. The openly gay rapper has been changing industry attitudes with his free-wheeling approach to fashion, which peaked with his lavish tribute to Little Richard in a lavender Versace jumpsuit at the MTV Music Video Awards. With plenty of skin, moisturised to Magic Mike levels, on display, the singer glowed in the asymmetrical outfit with a jewel-encrusted jacket and generous train. The Jheri–curled mullet added to the over-the-top approach, reinforcing that the trail-blazer has nothing to hide. 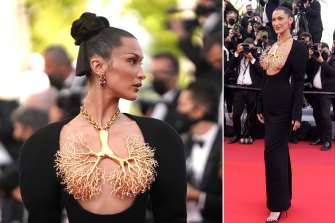 Waiting to exhale: Bella Hadid in Schiaparelli at the Cannes Film Festival.Credit:AP

Normally, a gold-dipped necklace designed to resemble our breathing apparatus would invite the heckle “nice set of lungs” but supermodel Bella Hadid in Schiaparelli Haute Couture left onlookers at the Cannes Film Festival speechless. The form-fitting dress with a neckline that dipped well below daring was fetching enough, but the adornment elevated it to artwork. Daniel Roseberry, Schiaparelli’s artistic director, was a red carpet favourite in 2021, with Lady Gaga, Adele and Beyoncé all borrowing from the designer’s storeroom. 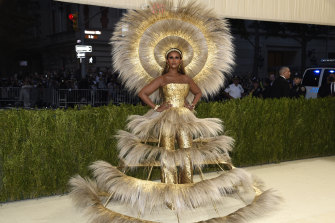 Iman attends The Metropolitan Museum of Art’s Costume Institute benefit gala celebrating the opening of the “In America: A Lexicon of Fashion” in Harris Reed.Credit:AP

When you’ve been a supermodel since the ’70s, you have a substantial head start on the red carpet’s new arrivals and Iman stood her ground in Harris Reed at The Met Gala. The gender-fluid British designer created a jacquard bustier and flared trousers in gold at Dolce & Gabbana’s atelier, completing the look with a feathered headdress. “I just wanted her to look like a beam of light,” Reed told Vogue. Beam of light or crop circle, Iman was a beacon of style. 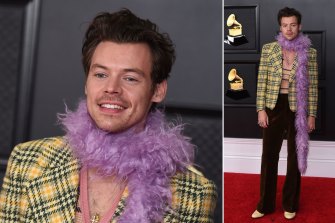 Harry Styles in Gucci at the 63rd Annual GRAMMY Awards in Los Angeles.Credit:AP

By blending glam rock touches with the comfort of nanna knitwear and plenty of Gucci, Styles has shed his One Direction past to pioneer a modern masculine approach to dressing on the red carpet. His stylist Harry Lambert has a playful approach to textures, disguising the singer’s subtle assault on gender stereotypes beneath familiar items such as sweater vests and tweed jackets, but it’s the Mae West feather boa that packs a punch. Come up and see him sometime. Anytime. 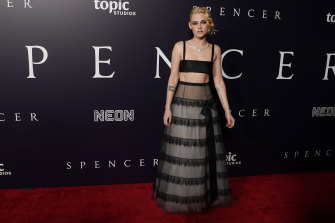 Kristen Stewart in Chanel, the star of “Spencer,” poses at the premiere of the film at the Directors Guild of America.Credit:AP

There’s an awkwardness to actress Kristen Stewart that served her well in the Twilight movie series and will no doubt inform her performance as Princess Diana in the upcoming Spencer. So, it was surprising to see the often tomboyish Stewart at ease and unapologetic in Chanel at Spencer’s Los Angeles premiere. The tiered sheer skirt and black bralette were ultra-feminine (I mean, there was even a bow) but Stewart added a cool edge with a smokey eye and messy bun. 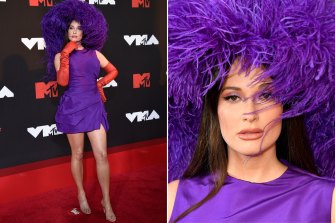 From the ankles up American singer and songwriter Kacey Musgraves is a living Rene Gruau illustration wearing Valentino Haute Couture at the MTV Music Video Awards. This was one of the stand-out looks from Valentino creative director Pierpaolo Piccioli’s show in July and Musgrave convincingly holds her own beneath the glamorous Philip Treacy feather hat. 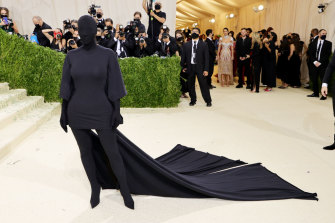 Me and my shadow: Kim Kardashian in Balenciaga at The Met Gala.Credit:Getty

In hooded black Balenciaga haute couture, Kim Kardashian finally answered the burning question: if a Kardashian walks the red carpet, with their face covered, will you see them?

The answer was an unequivocal “yes”, as Kardashian went meta, demonstrating the power of her silhouette. It was funny, thoughtful and will continue to influence the red carpet in 2022. Does anyone remember what her half-sister Kendall Jenner wore?

Meghan Markle’s style has completely changed through the years