Rachel Jennifer Heyman did some quick-fire swiping on the Tinder dating app at her apartment in Manhattan one Saturday evening in January 2019 with her friend over glasses of wine, a variety of Trader Joe’s appetizers and reality TV.

“At points we would take each other’s phone,” she said, and swiped right for each other while sitting by the fireplace in the duplex Ms. Heyman shared with another friend on the Upper West Side. “It was easily a night of 50 to 100 swipes. Not that I’m liking all of them.”

Ms. Heyman, on and off dating sites for a decade, said she let potential matches “marinate” a couple of days before reaching out to Adam Seth Joseph, whose “warm smile” on the photo he posted caught her eye.

“We had this great normal banter,” said Ms. Heyman, 36, a clinical social worker, who is the director of the opioid treatment program at the Center for Comprehensive Health Practice in East Harlem in Manhattan. She graduated from Binghamton University, and received a master’s in social work from the University of Pennsylvania. “It was familiar, with no crazy red flags,” she said. “I loved that he was a special ed teacher and close to his family.”

Mr. Joseph, 43, who works at St. Mary’s Hospital for Children in Bayside, Queens, where he is a special-education teacher for P.S. Q23 at Queen’s Children Center. He graduated from SUNY Old Westbury and received a master’s degree in special education from Touro College.

“We understood the challenges of each other’s jobs,” she said.

But, the connection fizzled after two weeks. He was caught up in moving into his new co-op in Oakland Gardens, Queens, after a couple of years of staying with various friends after a tough breakup. 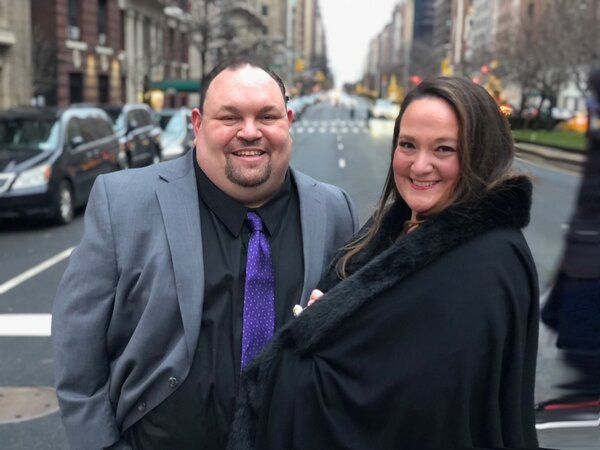 After losing touch for two weeks, something tugged at her while she was a mentor at a girl’s leadership retreat at the Main Idea at Camp Walden, a summer camp for economically-disadvantaged girls in Denmark, Maine.

“Camp makes me happy,” she recalled thinking. “These girls make me happy. Maybe, I was allowed to be happy. I reached out.”

That also gave Mr. Joseph, the boost he needed, and in mid-February, the day after he moved into his apartment, they met at an Upper West Side bar.

“I felt seen, and beautiful,” she said, as they walked over to Bar Veloce, after the first bar was too crowded.

Later when he asked if he passed the first level of the date, and she said yes, they went for sushi at Momoya across the street.

“It was the best first date I had ever been on,” he said, and they had a quick good-night kiss outside the 72nd Street subway.

After he began to walk away, he recalled, she shouted, “‘wait, wait, wait, one more.’” And, they had another quick kiss.

“I was honestly floating at that point,” she said.

They began dating and by the end of 2019 they spoke about getting married. She agreed to “change ZIP codes” and move to Queens after her lease was up in June 2020. But as the coronavirus pandemic set in, she began living there in March.

On Aug. 1, he proposed in a small park along the Hudson River in Hastings-on-Hudson, N.Y.

On Dec. 31, around 6:30 p.m., Shawn A. Cammy, ordained by American Marriage Ministries and her brother-in-law, officiated at a ceremony incorporating Jewish elements. About 150 friends and family watched on Zoom, as they married on the Upper East Side apartment terrace of the bride’s parents. Only immediate family attended in person.

“It ended and began the year on a sweet note,” she said.