From stunning designer wedding dresses to royal carriages, there’s no shortage of grandeur at royal weddings. With the Royal Family being one of the wealthiest families in the UK, the royal brides and grooms don’t tend to do things by halves either. It is tradition for royal brides to wear a tiara on their wedding day. And, with plenty of diamonds and stunning jewels available for the royals to use, these jewels capture the attention of many.

Express.co.uk takes a look at the royal wedding tiaras worn by brides including Kate Middleton, Meghan Markle, and Sarah Ferguson

Some royal brides have opted for antique heirlooms, while others have donned headpieces which have been created especially for them.

Express.co.uk takes a look at the story behind the tiaras worn by some of the most well-known royal brides.

It was in 1919 when Gerrard created the Queen Mary Fringe Tiara.

This headpiece was created by dismantling a necklace of Queen Mary’s, given to her as a wedding present by Queen Victoria.

It is made up of 47 diamond bars. These are divided by smaller diamond spikes.

Queen Mary gifted the tiara to her daughter-in-law, the Queen Mother, who later lent it to her daughter, who was at the time Princess Elizabeth, and granddaughter, Anne, the Princess Royal, on their wedding days.

The Queen, who was a princess on her wedding day, tied the knot with Prince Philip, the Duke of Edinburgh, in 1947.

The couple announced their plans to separate in 1989, and three years later, in 1992, they divorced.

She found love again with Timothy Laurence, and the pair wed in 1992.

This time around, she did not wear a royal tiara, but instead sported a small spray of blossoms in her hair.

This piece of jewellery has a diamond bandage which was possibly made in France i the early twentieth century, The Court Jeweller reports.

It was gifted to Queen Elizabeth II in 1947 as a wedding present, by Princess Andrew of Greece and Denmark.

Fast forward to 1972, and the monarch passed it on to her daughter, the Princess Royal. 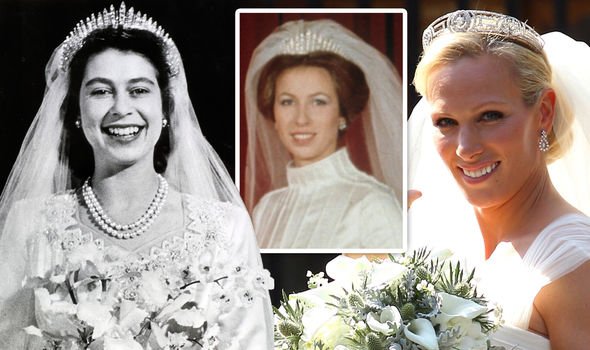 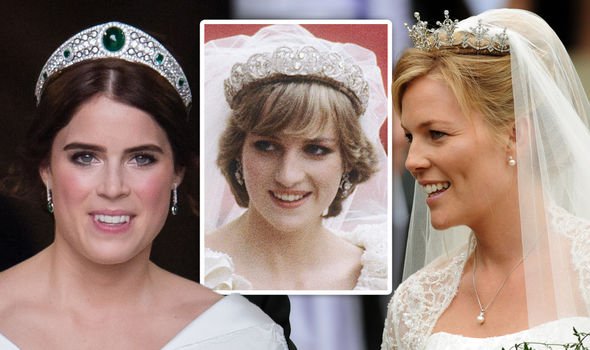 On her wedding day in October 2018, Princess Eugenie wore the The Greville Emerald Kokoshnik.

This stunning headpiece was made by Boucheron in 1919 for socialite Mrs Ronnie Greville.

Queen Elizabeth, the Queen Mother later inherited it, with the jewellery becoming part of the Queen’s collection following her mother’s death in 2002.

It has a large emerald set in the centre, with diamonds and smaller cabochon emeralds making up the rest of the piece.

Ahead of her marriage to Prince Charles, Princess Diana was called Lady Diana Spencer.

Rather than wearing a piece from Queen Elizabeth’s jewellery collection, she wore the Spencer Tiara.

This diamond heirloom had been in the family for almost a century.

It was a sentimental nod to her mother and sisters, who had previously worn the headpiece on their own wedding days.

Autumn Phillips married the Queen’s grandson Peter Phillips back in 2008.

The nuptials took place at St George’s Chapel at Windsor Castle, and was attended by 300 guests.

Autumn, who hails from Canada, wore the Festoon Tiara on her wedding day.

This piece of diamond jewellery was borrowed from her now mother-in-law Princess Anne.

It was gifted to the royal back in 1973, by the Hong Kong firm, World-Wide Shipping Group, after she christened one of their ships.

Tiaras, tulle and fairy tale flair are in full swing at a Royal Wedding 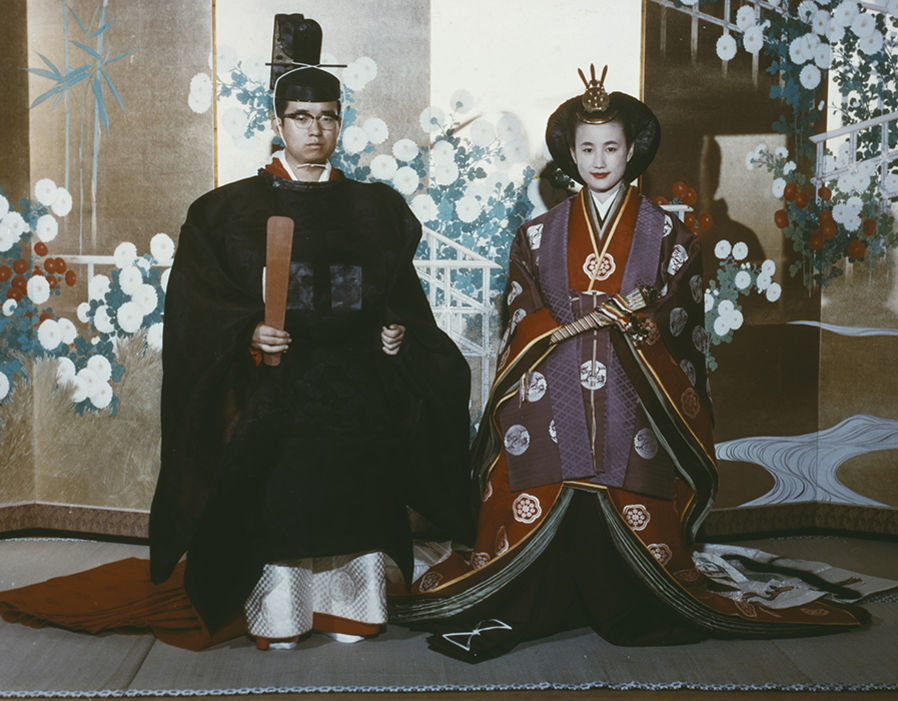 Masahito, Prince Hitachi and Hanako Tsugaru (Hanako, Princess Hitachi) pictured together in ceremonial dress in Japan on the day of their wedding, 30th September 1964.

Kate Middleton, now the Duchess of Cambridge, wore the Cartier Halo Tiara on her and Prince William’s wedding day back in 2011.

This headpiece belonged to the Queen Mother.

The website The Court Jeweller says that this was made by Cartier in 1936, and given to the Queen Mother by King George VI as an anniversary present.

Queen Elizabeth II received this piece of jewellery on her 18th birthday in 1944, and it has been worn by the Queen Mother, Princess Margaret, the Princess Royal, and the Duchess of Cambridge.

As she arrived, the world got to see the stunning tiara she was wearing.

It was the Queen Mary’s Diamond Bandeau, which was made in 1932 by Garrad.

According to The Court Jeweller, this headpiece was designed for Queen Mary and was designed to accommodate the central County of Lincoln Brooch – a wedding gift of Queen Mary’s which dates back to 1893.

Borrowed by Meghan last year, this tiara is adorned with diamonds, and was bequeathed to the Queen in 1953.

Rather than sporting an heirloom, this royal wedding saw the bride wearing a tiara which had been designed for her, from antique jewels.

According to reports, the Wessex Wedding Tiara diamonds may have been sourced form Queen Victoria’s Regal Circlet. 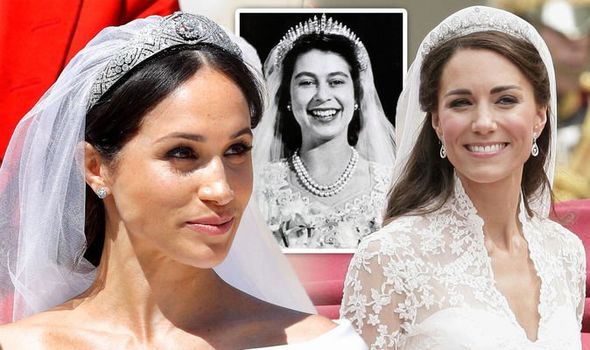 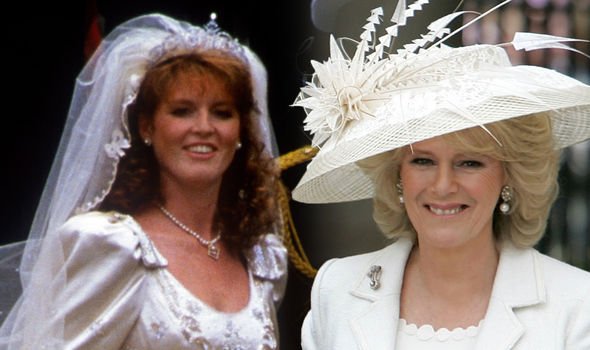 Sarah, Duchess of York, also wore a tiara which had been created specially for her wedding.

As she walked down the aisle ahead of her and Prince Andrew saying, ‘I do’, the world got to see the York Diamond Tiara.

It’s said that this diamond-encrusted piece was specially commissioned by the Queen for the nuptials.

It features a five-carat diamond and is flanked by floral scrollwork.

The pair went on to receive a blessing at St George’s Chapel, Windsor.

Unlike the majority of royal brides, Camilla, Duchess of Cornwall, did not wear a tiara.

Who: His Royal Highness Prince Harry and Meghan Markle (now the Duke and Duchess of Sussex)

Dress: Meghan wore a dress designed by Clare Waight Keller for Givenchy. The white dress was made of silk and had a boat neckline. The veil was an incredible 16 feet long.

Tiara: The Duchess of Sussex chose the Queen Mary diamond bandeau tiara, made in 1932, with a flower brooch in the middle from 1893.

Cake: The cake was a made by Claire Ptak, based in London. It was lemon and elderflower cake, decorated with peonies and buttercream icing.

Who: Princess Eugenie of York and Jack Brooksbank

Dress: Eugenie’s dress was made by Peter Pilotto and Christopher de Vos and had a full skirt, long sleeves and was ivory in colour. The dress has a low back designed to show Euegnie’s scar from scoliosis surgery, a cause she has spoken out about in the past and since the wedding.

Tiara: She wore the stunning Greville Emerald Kokoshnik Tiara, lent to her by the Queen. It has a huge emerald in the middle.

Cake: The cake had five tiers and was a red velvet and chocolate cake made by London-based cake designer Sophie Cabot.

Who: Prince William and Kate Middleton

Dress: Kate wore a dress made by Sarah Burton for Alexander McQueen. The satin gown featured long lace sleeves. It had a nine foot train and the lace featured roses, daffodils, thistles and shamrocks.

Tiara: Kate borrowed the Cartier Scroll Tiara, now known as the Halo tiara. It bought by the Queen’s father, the future King George VI, for his wife Elizabeth.

Cake: William and Kate opted for a traditional fruit cake with eight tiers. It was decorated with sugar flowers. William also had an additional chocolate biscuit cake was made from a Royal Family recipe.

Notable guests: Guests included family and friends of the couple, as well as members of the military and people who work with charities the pair support.

Dress: Diana’s gown was designed by the Elizabeth and David Emanuel and had an enormous 25-foot train. The dress was ivory and featured lace. In typical 80s style the rather large dress had huge sleeves. The dress was badly creased during the carriage ride to the ceremony, as it was so large.

Cake: Diana and Charles had a number of cakes including a five-foot-tall layered fruitcake. Another cake was made by Belgian pastry chef S. G. Sender and another by Chef Nicholas Lodge.

Libra weekly horoscope: What your star sign has in store for April 24 – 30