Home » Fashion » On the Brownlow red carpet, WA designers get their moment in the sun

On the fashion landscape, the AFL Brownlow Medal red carpet sits beside the Logies, in a nicer part of town than school formals but on the far outskirts of the polished Emmys, Oscars and The Met Gala. This year’s showcase for fake tans, bouncy blowouts and bare skin, alongside sporting achievement, has moved even further afield, crossing the Nullarbor Plain to Perth’s Optus Stadium on Sunday evening, because of lockdown restrictions in Victoria.

Lace trim and lamé in hand, west coast designers are ready to bask in the fashion focus that has shone on the event since Rebecca Judd’s 2004 red carpet appearance in a provocative Ruth Tarvydas red gown that tested the limits of Hollywood Tape. 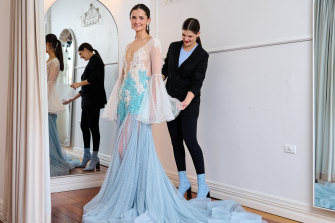 “It was all up in the air until they confirmed Perth as the host a few weeks ago,” said designer Jonté Morgan, of Jonté Designs, who has catered to the flamboyant requests of the gala-hopping denizens from Perth’s affluent suburbs of Peppermint Grove and Dalkeith since 2012. “Normally, we would have months to prepare. Fortunately, I created a capsule collection and kept it under wraps, just in case.”

“There are all the players’ partners to dress and other attendees, and it’s also the middle of bridal season, which managed to go ahead over here, so things are going great,” Morgan said.

Across the road from Kardinia Park in the Victorian city of Geelong, business is much slower at Pearls & Roses Bridal. With a strong season from the local team, owner Karen Bourdamis would normally be working long hours finishing elaborate gowns for the Brownlow. This year, the phones are as silent as last year, when the ceremony first broke with tradition and moved to Brisbane.

“It had always been my dream to have my dresses at the Brownlow since I started 31 years ago and for the last seven years I have, dressing Georgia Mackie and Renee Enright,” Bourdamis said. “It’s the fun part of the job.”

Exposure from the Brownlow red carpet attracted attention and orders from Geelong locals and Melbourne clients. 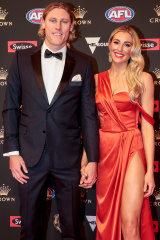 “We would stop everything to make the dresses and then race home to watch it on television. It’s just not the same now,” she said.

In Perth, Morgan is exhausted keeping up with demand but understands the marketing power of winning on the Brownlow red carpet, having dressed Elli Brashaw, the 2019 date of medal winner Nat Fyfe.

“The coverage you receive is pretty special. It’s always great to be represented and this time with it being in Perth, it’s even more special. Like everyone, I will be sitting back the next day and looking at the comments, good and bad. It’s all part of the fun.”

In Geelong, Bourdamis will be watching but there will be no need to race home from the quiet store. “It’s different. They’ve taken this away from our state. But I’m a diehard.”

Yes, Flare Jeans Are Back, but This Time, They've Got an Edge

Amazon Shoppers Love These Under-$40 Leggings So Much, They Keep Buying Them for Their Friends