Butterflies must be one of the most enduring and popular motifs in fashion, but have you ever seen them on cool sneakers?

Yet when many people’s eyes alight on shoes by Fashion Baby, 19-year-old Lucas Portman’s new fashion brand, they see paint drips or Rorschach inkblots flanking the laces rather than the swallowtail variety of that species of insects.

“I love that people don’t necessarily see it for what it is, it’s just an organic shape,” said Portman, who must have surely inherited the fashion gene from his model mother, Natalia Vodianova, who is a key investor and adviser in the fashion upstart. “I think that’s what makes a shoe special — when people see it in their own way.”

Retailing for 330 euros and available in three color ways named after actual butterflies and moths, the shoes are made of vegan leather in Portugal and also feature a swallowtail silhouette on the sole — half on each shoe.

Portman, a self-described sneaker junkie, assures the footwear is the most comfortable he’s ever worn, pulling one off his foot to show the thick insole sheltered inside the chunky skater style.

All of the Fashion at the 2021 BAFTA Awards

One of his first creations was a T-shirt with blanket-stitched edges depicting a Monarch butterfly wrapping the wearer around the waist, as if in a hug. “I showed it to my mom. She was like, ‘Wow, this is so cool,’” he recalled. “Basically, that gave me the confidence boost I needed to keep going and make more. And then for two months I went into hibernation when I was either sleeping or designing clothes.”

Designing exclusively on the computer and employing Photoshop to create realistic-looking, finished garments, “I designed what I would wear. Because if you wouldn’t wear it, then why are you making it?” he asked in an interview. “And then I realized what I came up with was very unisex. It’s good for guys and for girls. On girls, you might call it a boyfriend fit. It’s that tomboy style that I love so much. We believe the shoes are made for everyone.” 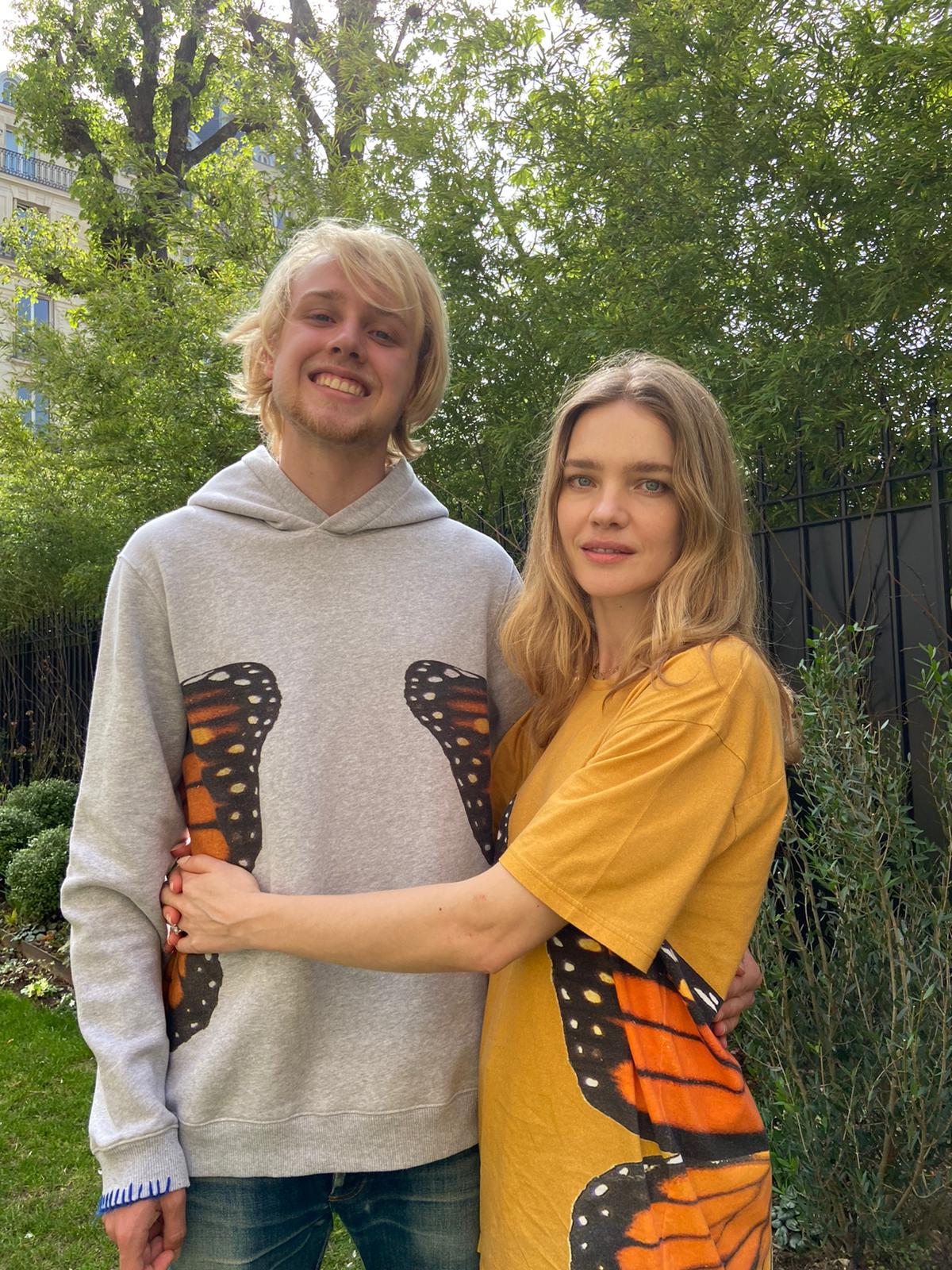 He admits he was intimidated to tackle sneakers, given his obsession with the latest drops detailed on Hypebeast, Complex, StockX and the Droplist app, and his esteem, approaching awe, for iconic Nike Inc. silhouettes including Air Max and Dunks. “It was almost untouchable for me, you know, these sneaker design legends,” he said, mentioning the likes of Nike’s Tinker Linn Hatfield Jr., and Kanye West, whose Yeezy shoes propelled Adidas in recent years.

But if there was anything missing, given streetwear’s obsession with urban environments and pursuits like skateboarding and basketball, it was Mother Nature herself. Cue Fashion Baby’s brand tag line: Urban aesthetics with a rural inspiration.

“As an industry insider, I loved how he used a butterfly in a bold, architectural way. I knew he had something fresh there and I encouraged him to continue,” Vodianova enthused. “I think beyond strong design and message that we should go back to admiring and protecting nature. The fact that Lucas is building that into the core of his brand’s actions — using high-end vegan leathers and suedes, and thriving for zero-waste production — is what will make his brand stand out and speak to younger consumers who are voting with their money for a better world, while not compromising on their style, comfort and luxury of the product.”

Portman describes the first six years of his life as a frequent-flier blur as he ping-ponged around the world with his supermodel mother. But when the family moved to the countryside of West Sussex, Portman and his two younger siblings discovered the joys of the garden, the river and the forest, where games of hide-and-seek frequently had him clambering to the top of trees.

His appreciation for the natural world hasn’t dimmed despite a move to Paris, as a tree-hugging — and tree-kissing — image on his Instagram feed attests. (He notes that post was pre-Fashion Baby, before he went dark on social media in the run-up phase.)

Portman notes his father, English property heir Justin, who lives between Uruguay and Montauk, N.Y., shares his fascination for moths and butterflies, and he ended up shooting an image campaign in Uruguay with a diverse cast of young people, who will share their personal stories on the Fashion Baby site and its social channels. 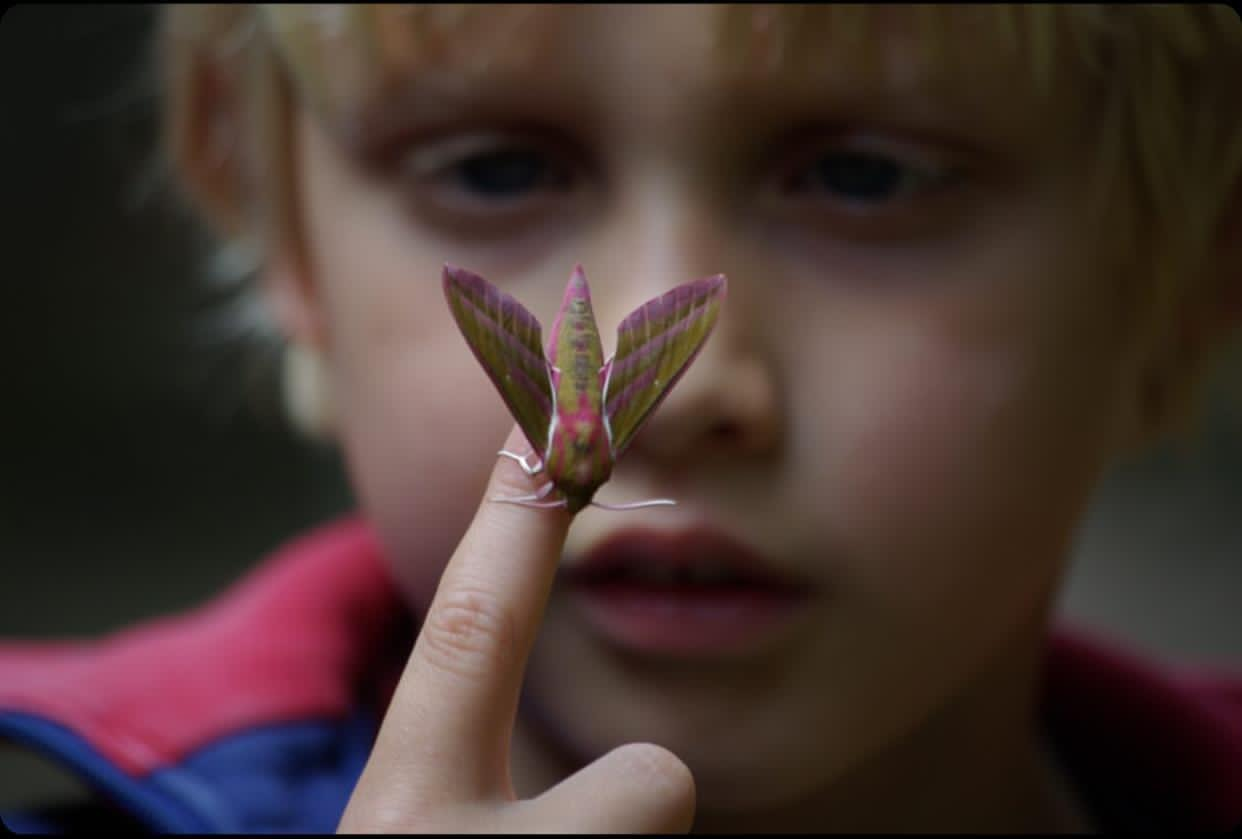 Even as a child, Lucas Portman had a fascination with butterflies and moths.

Fashion Baby apparel will be released in June, and Portman is gearing up to hire some people to help him on the project as he’s been accepted at Brown University, where he will study economics starting in September — perhaps sneaking over to the nearby Rhode Island School of Design for a few courses.

Portman plans to dispatch shoes to fashion friends like designer Stella McCartney and model Mariacarla Boscono, along with influencers and “cool people” to spread the word about his new brand. (Portman himself has 44,500 followers on Instagram, where his younger sister Neva can be seen test-driving the Swallowtail Lows.)

The plan is to sell mainly direct-to-consumer, with select wholesale partners, he said, alluding to discussions with e-tailers and cool specialty stores.

For all his passion for sneakers, the rereleased Air Max 90 Bacon being a penultimate favorite, Portman said he owns fewer than 20 pairs, preferring the romance and pleasure of anticipation rather than the reality of owning. “Not having it and admiring it from a distance in a way makes you appreciate it much more,” he mused. He also tends to shop for clothes only once a year, typically doing a big haul at Blue & Cream in East Hampton, N.Y.

To be sure, Portman has an affection for the fashion industry, and occasionally models for brands including Balmain, preferring the rush of a live runway show to photo shoots.

He said he is thankful for the fashion network and brain trust afforded by his family, including stepdad Antoine Arnault, chief executive officer of Berluti and head of image, communications and environment at LVMH Moët Hennessy Louis Vuitton. The teenager sought his advice on the size range of his sneaker offering, for example.

Thanks to his his family’s extensive connections, he also alighted upon Francisco Da Costa E Silva, a sourcing guru who helped him find the vegan leathers in Italy, and the factory in Portugal that can help him achieve his lofty sustainability goals.

He admits that there’s a slight downside to growing up amid such seasoned pros. “Being around these fashion tycoons, it’s tough to make your own name and be respected as a creative,” he said. “I think this is a good beginning to set myself apart. This is my brainchild.”

Antoine Arnault and Natalia Vodianova Tie the Knot in Paris

Get to Know: Kepler