On Wednesday night, Louis Vuitton landed in Kennedy Airport with a blur of black S.U.V.s and celebrity stardust, clogging the tarmacs outside the old T.W.A. terminal with LV-clad guests who ogled Eero Saarinen’s ode to the space age and clattered into the arrivals lounge in towering LV ankle boots.

The cruise show circus had touched down, and suddenly the most unchic part of New York City had a new look.

The newlyweds Sophie Turner and Joe Jonas were there, clutching each other’s limbs. Emma Stone schmoozed with Julianne Moore, who was wearing a jacket with some sort of emerald green capelet flying off the back (Louis Vuitton, of course). Cate Blanchett, who hadn’t made it to the Met Gala earlier in the week, made it to the airport. Laura Harrier swiveled her head and looked excited.

The terminal, an architectural landmark that opened in 1962 and quickly became a symbol of the dream of soaring into the sky, was abandoned in 2001 and mostly has been out of the public eye. MCR and Morse Development got the rights to redevelop it in 2016 and have been restoring it to full midcentury glory; later this month it reopens as a hotel. A ship may be baptized with a bottle of Champagne, but this was baptism by fashion.

And while the French luxury behemoth may not be able to make air travel elegant again — that’s probably a lost cause — in its first show in New York under the women’s artistic director Nicolas Ghesquière, Vuitton made a pretty convincing argument for the currency of time travel.

Filling the soaring space once designated for “arrivals” and “departures” with curving rows of benches and 2,500 pots of bamboo and trailing ivy (the better to suggest the back-to-nature decaying state the terminal had endured), Mr. Ghesquière collaged and conjured a 1980s New Wave-meets-moto-Marie-Antoinette-meets-Wall-Street-meets-Art-Deco-meets-Gotham (got that?) mashup of periods and references. There was technology, too. (More on that later). 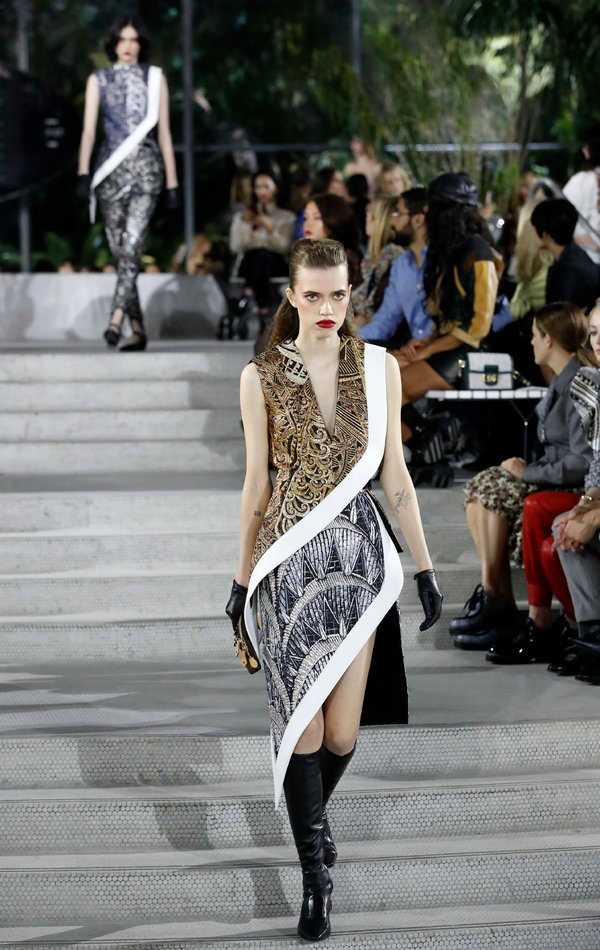 Elaborately beaded vintage/Vegas butterfly capelets followed pinstripes; swagged and ruched velvets mixed it up with pouf miniskirts (remember those?) and crystal-encrusted bustiers cut with O-ring zippers. The classic logo bags had been reimagined with flexible screens set into the leather.

Flexible screens? Welcome to the future of handbags. Maybe. Or air travel?

They were prototypes — a marking of territory if you will, to show everyone who got there first — but sometime in the next few seasons you will be able to Bluetooth your phone to your purse and flash your boarding pass via your handbag. Which would get you bragging rights, if nothing else.

Is it necessary? Some would ask the same question of the cruise shows themselves. It’s a debate worth having.

The point was consistent though: what’s next, jammed up with what was and smack against what is. That’s the kind of discombobulation you get from crossing date lines anyway. Not to mention tourism, where memories of earlier visits shade the experience of now.

“It’s the most dressed-up collection I have done,” Mr. Ghesquière said in a preview the day before the show (which was true). He also noted that the first time he came to New York, in his 20s, he had actually landed at the T.W.A. terminal, just before it closed.

“I think America is the best in streetwear — it really invented streetwear — so what could I bring?” he continued. “I can bring French savoir-faire.” Then he could explore all his associations with the idea of “New York,” like the romantic place it occupies in the mind of a foreigner, the edge where downtown meets uptown, the chaos and mess of the city itself.

In the end, it was an equally chaotic collection. Which may not be the fashion we want (some of Mr. Ghesquière’s shapes are awfully challenging to wear, as some assembled guests proved), but may be the fashion we deserve. Up, up and away.

Vanessa Friedman is The Times’s fashion director and chief fashion critic. She was previously the fashion editor of the Financial Times. @VVFriedman

Sagittarius weekly horoscope: What your star sign has in store for June 20 – June 26