A little slice of paradise, and Australian fashion history, is coming to Sydney with the Powerhouse Museum's next major fashion exhibition: a survey of the work of iconic design duo Jenny Kee and Linda Jackson.

Opening in October, "Jenny Kee and Linda Jackson: Step Into Paradise", is a nod to the pair's 1970s Strand Arcade frock shop, Flamingo Park, which featured a sign reading "Welcome to Paradise" on its front door. 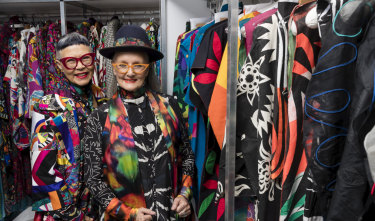 Fashion designers Jenny Kee and Linda Jackson will be honoured with a retrospective exhibition at the Powerhouse Museum in Sydney.Credit:Brook Mitchell

Kee and Jackson were known for their colourful, joy-filled pieces, drawing inspiration from Australiana: animals, nature, landscapes and Indigenous art.

The pair were perhaps best known for their iconic knits featuring Australian animals, such as the koala jumper famously worn by Princess Diana to a polo match in 1982.

Over their four-decade partnership, Kee and Jackson – who were both awarded Orders of Australia in 2018 – have experienced a time of immense freedom, optimism and a "sense of national pride", Kee said, adding she hoped the exhibition will give visitors a "real sense of how we truly, deeply loved our country".

Jackson agreed, noting the work the pair did was often "small and often made to order" and about "knowing who made your clothes".

"I think this exhibition will inspire others, young and older, to care about our country [and] be passionate about the work that one does," she said.

The "immersive" exhibition, curated by Glynis Jones and several years in the making, will chart the pair's creative partnership from their first meeting in 1973. It will also include their individual formative years, as well as work from more recent collaborations such as those with fellow fashion duo, Anna Plunkett and Luke Sales from Romance Was Born.

Lisa Havilah, CEO of the Powerhouse Museum, described Kee and Jackson as "the matriarchs of Australian fashion".

"Jenny and Linda are part of fashion, cultural and social history," she said.

"They have become an innate part of the visual language and identity of Australia and we are excited to be sharing their story."

The museum has collected pieces from Kee and Jackson since 1981 and holds the largest collection of their work.

The exhibition will include more than 150 garments, textiles, photographs and artworks, many of them previously unseen, from the museum’s own collection as well as pieces from the designers’ personal archives. This includes Jacksons' Opal jewellery from her Bush Couture Studio and early pieces from her work with art centres in the Northern Territory.

It follows a retrospective on the work of Australian fashion designer Akira Isogawa.

I’m a busy mum & keeping my house tidy is impossible – so I use the 'Pile Method' to declutter in minutes, it’s so easy