THE end of summer might be in sight but there is little doubt the nation’s beach huts have been this year’s staycation stars.

The brightly coloured “sheds” dotted along the seaside are no longer just for changing into and out of your swimsuit — as they are often kitted out with kitchens, beds and sofas. 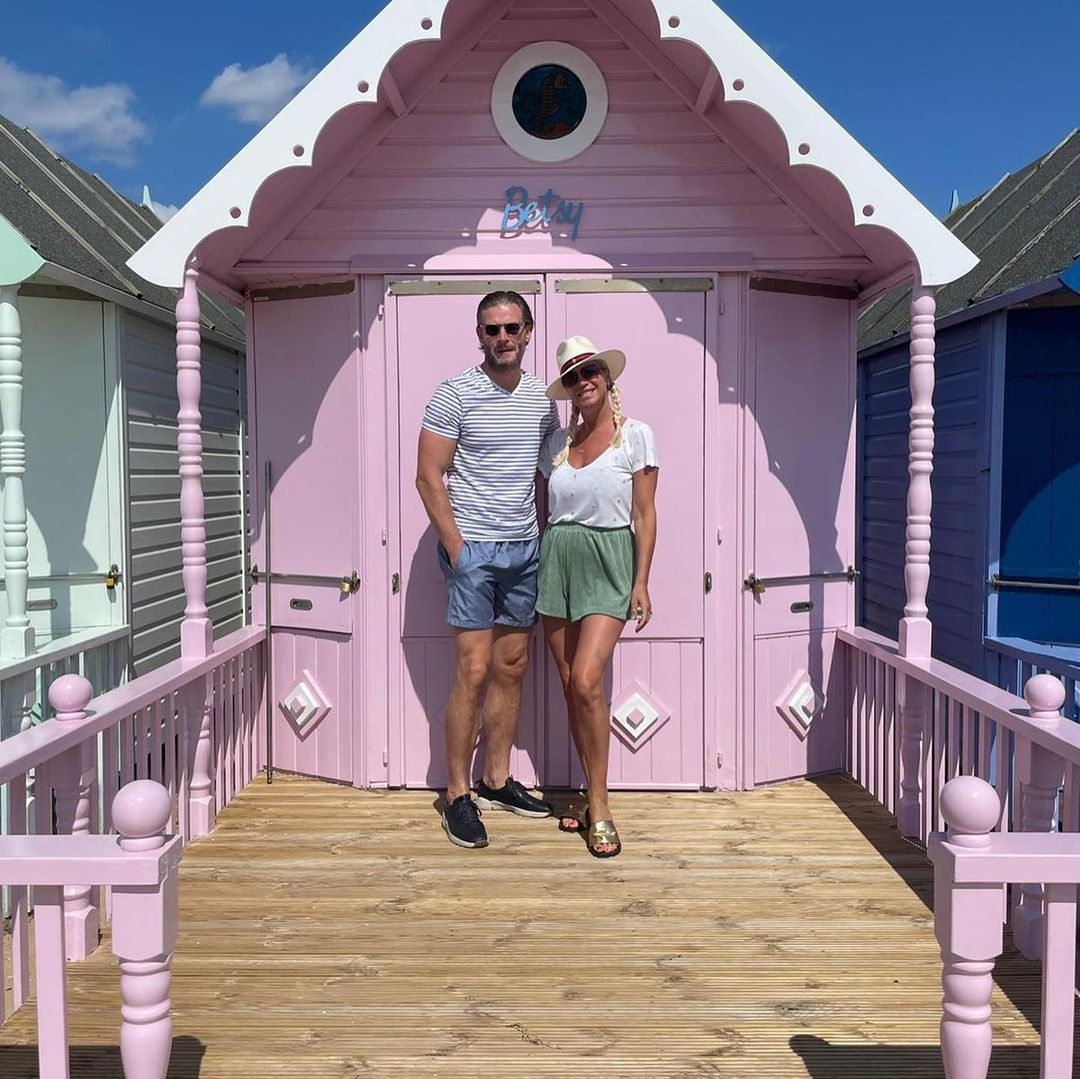 Another in Felixstowe, Suffolk, sold for £88,000, quadruple its value four years ago, having been on the market for just 24 hours.

In Abersoch, Gwynedd, beach hut s have recently fetched up to £160,000.
On average, they are selling for around 40 per cent more than they were last year.

Travel restrictions are thought to be behind soaring prices, but celebrities such as Denise van Outen, 47, and influencer Mrs Hinch, 31, aka Sophie Hinchliffe, who have both posted about renting huts, are also boosting their popularity. We speak to three beach-hut owners about their seaside shacks.

LEANNE CRANE, 41, from Colchester, bought her beach hut to escape the house with son Joseph, six, last August, following the first lockdown. After spotting a quaint hut in nearby Mersea Island, Leanne persuaded her husband Alex, also 41, it would be a good investment.

She says: “Being locked down in the house for months, I would fantasise about having my own space at the beach where I could take Joseph. I couldn’t wait to get out and create happy family memories away from the four walls. 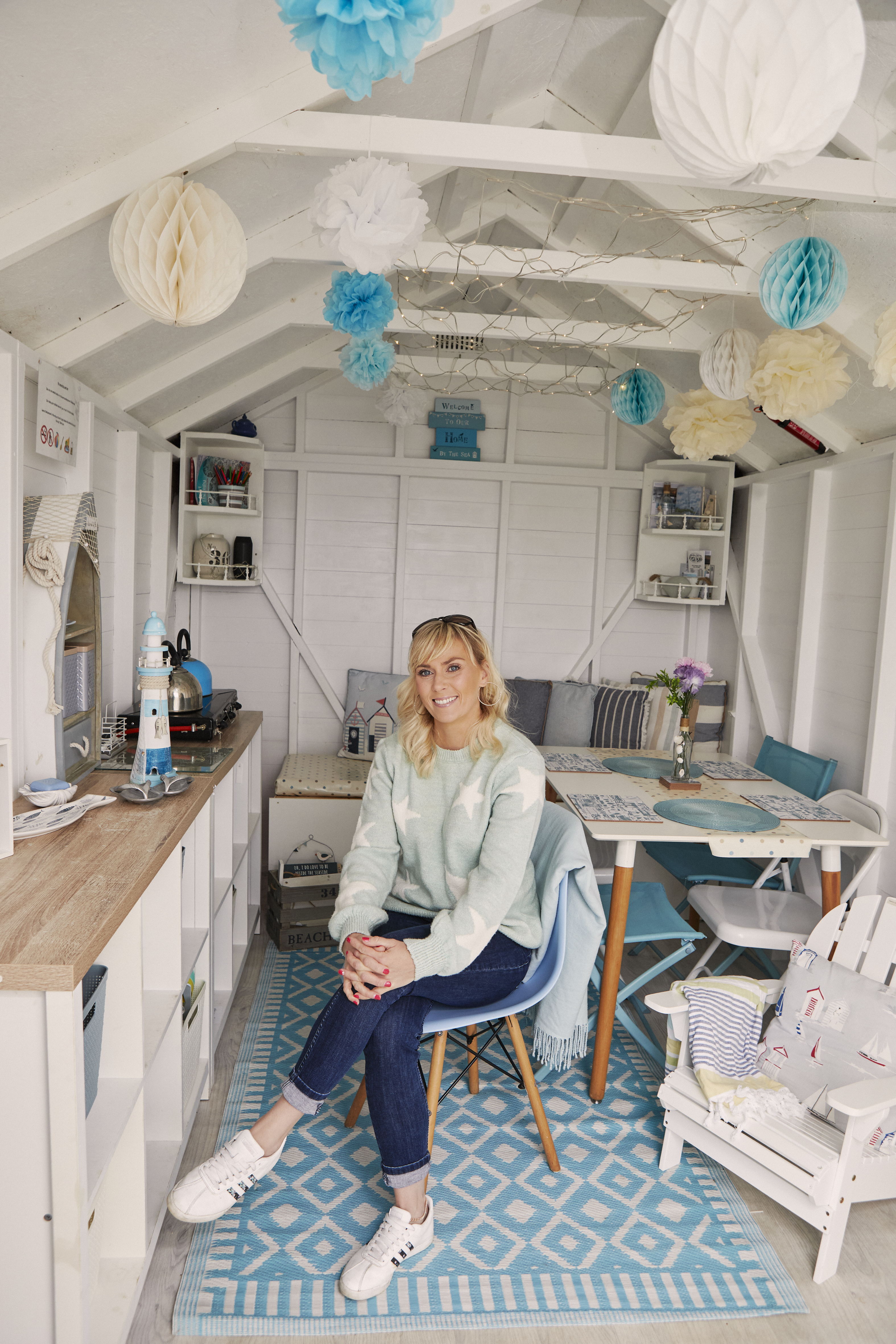 “As soon as I saw the pretty beach hut, I fell in love and needed to buy it. All of the nostalgia from my childhood, hanging out near beach huts on holiday, came flooding back.

“As a child, I’d spend hours walking among the pastel-coloured huts and gossiping with my mates. I’d never imagined that one day I would own one myself.

“Alex was sceptical to begin with and confused about why I wanted one so badly. But he loves it just as much as I do now and knows it was a good purchase.”

The couple both work in the emergency services and used all their savings and took out a small loan to afford the £28,000 hut. 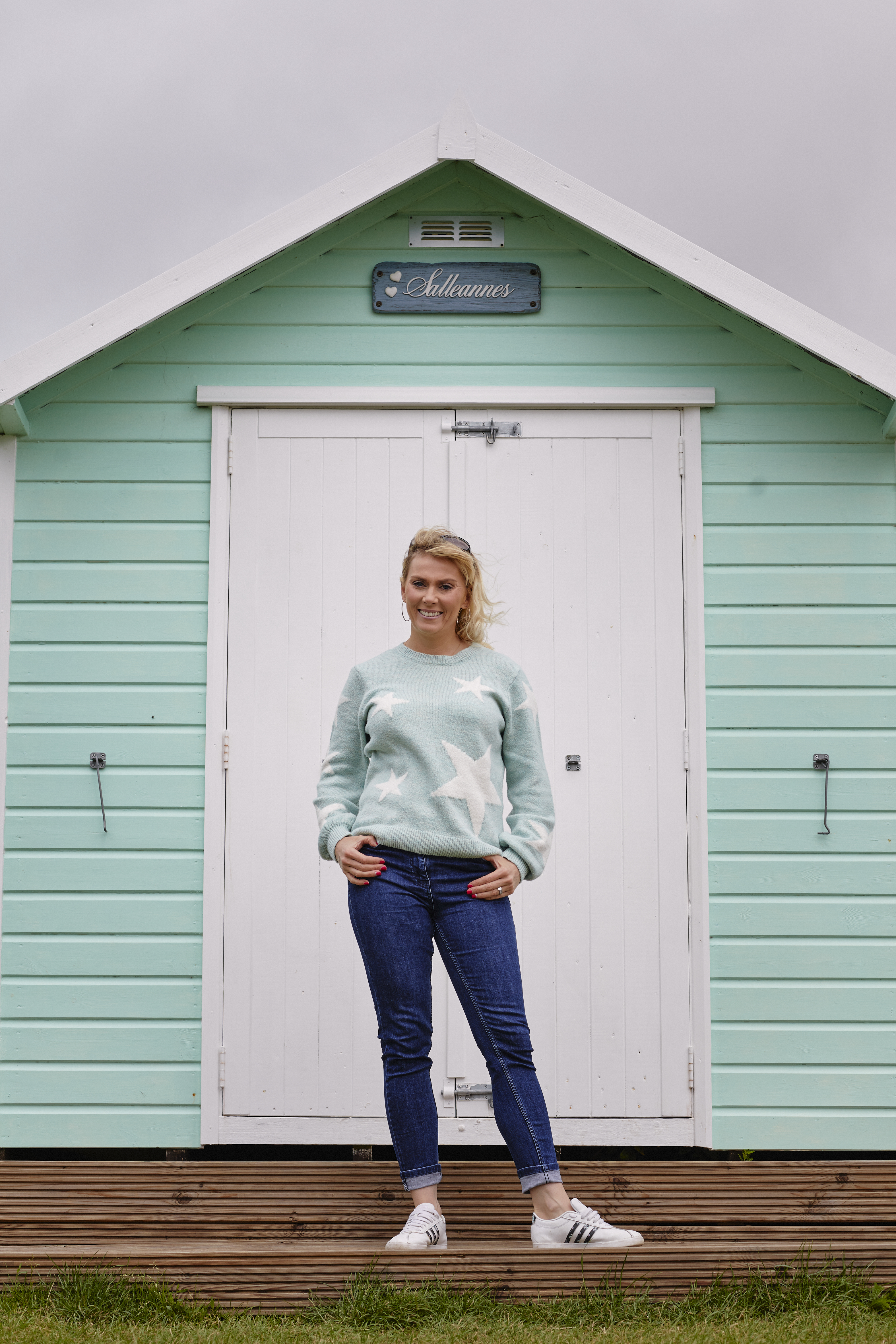 "She says: “I believe ours is now worth more than £42,000. A hut two doors down just sold for this price. I think the pandemic has forced people to appreciate what’s on their own doorstep rather than travelling abroad — and these huts are so pretty.”

Leanne, who rents out the hut for £65 a day during the summer, has already created some family memories there.

She says: “We had our first get-together at the beach hut on Easter Sunday and my sister announced that after eight rounds of IVF they were expecting their first baby. It made for such a special day.

“The beach hut will always hold that valuable moment we shared as a family. Our beach hut is a family investment.

“I can pass it down to my son and it can continue to be used by our family for years to come. It’s like an heirloom that we will cherish.”

‘Huts sell for four times what we paid three years ago’

JILL SIMMONS, 63, a full-time mum and grandma from Braintree, Essex, and her musician husband Mike, 59, bought their navy blue beach hut in nearby Walton-on-the-Naze for £15,000 in 2018. She says: “We decided to buy a beach hut as a refuge for our family.

"It was a spur of the moment buy. We were admiring the huts on a walk just as a woman was putting a For Sale sign up. We made the decision there and then. It all seemed so perfect. It was navy blue, and natural wood on the inside. We knew we’d need to decorate but we still loved it. We bought the beach hut for £15,000 using our savings and money Mike was paid when he retired from his IT consultancy job. 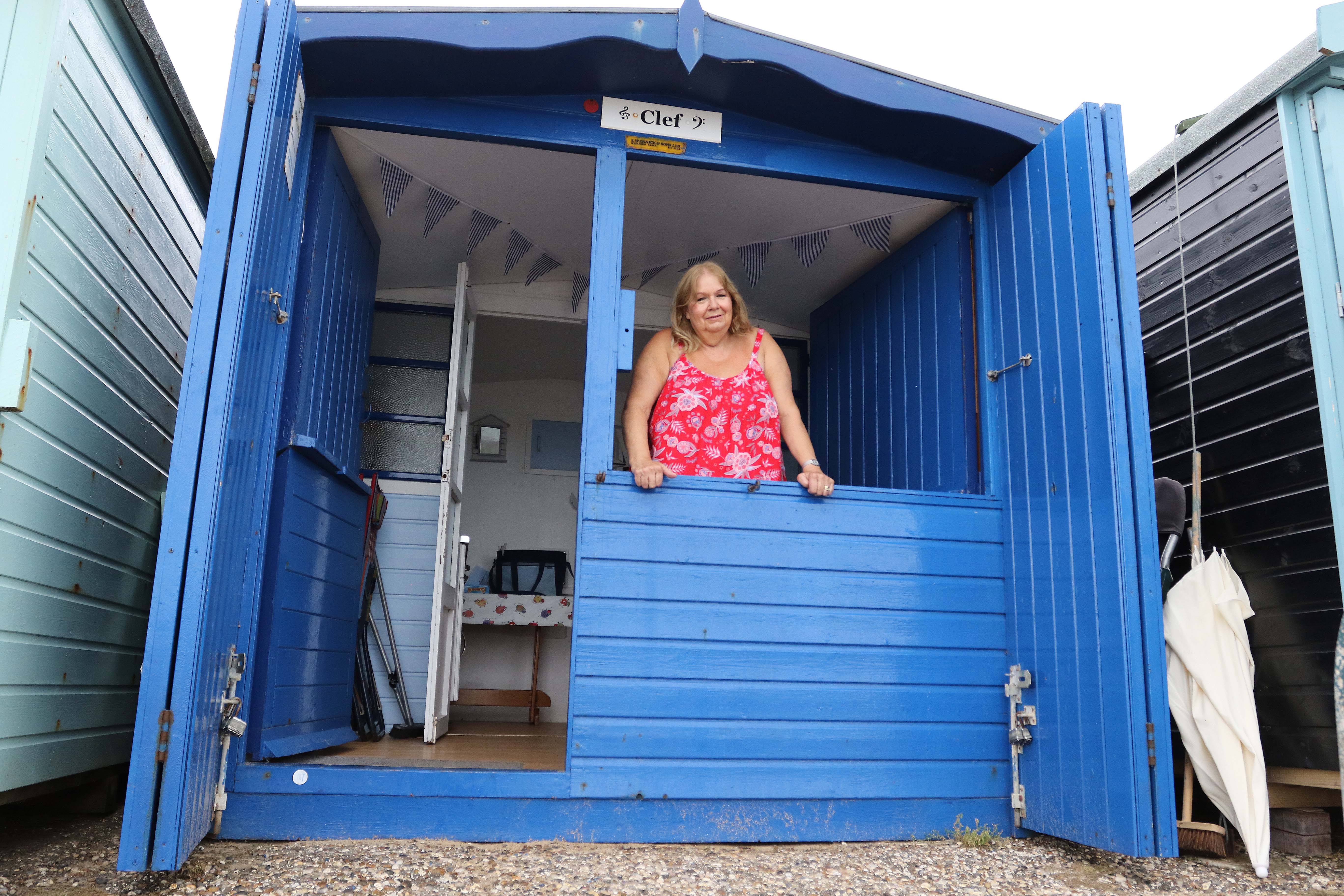 “One of our favourite things is that mobile phones don’t work well at the beach hut, so it feels like you’re getting away from the rat race." The couple would be quids in if they chose to sell up.

Jill says: “Beach huts near ours now sell for quadruple what we paid, between £60,000 and £65,000. The explosion of prices has been incredible.” But the hut is worth far more in sentimental value as they bought it as a place to remember their late son James, who died in 2016.

The 18-year-old had been a passenger in his friend’s car when a drunk and drugged driver crashed into them head-on, killing them both. Jill says: “To get through, we had to try to remember the happy times and for us, all our best memories of James were at the beach.

“He’d spend hours in the sand building sandcastles, splashing in the water and going on long coastal walks. We can do the same with our grandchildren now.”

VICKY GUNN, 42, from Angus, which borders Aberdeenshire, decided to call time on her career as a finance director in 2016 and now makes a living buying, selling and renting out beach huts.

She currently owns one hut and manages nine others in Walton-on-the-Naze, Essex. Vicky says: “Working in a stressful finance job for the NHS, the coast was the only place I could truly switch off. 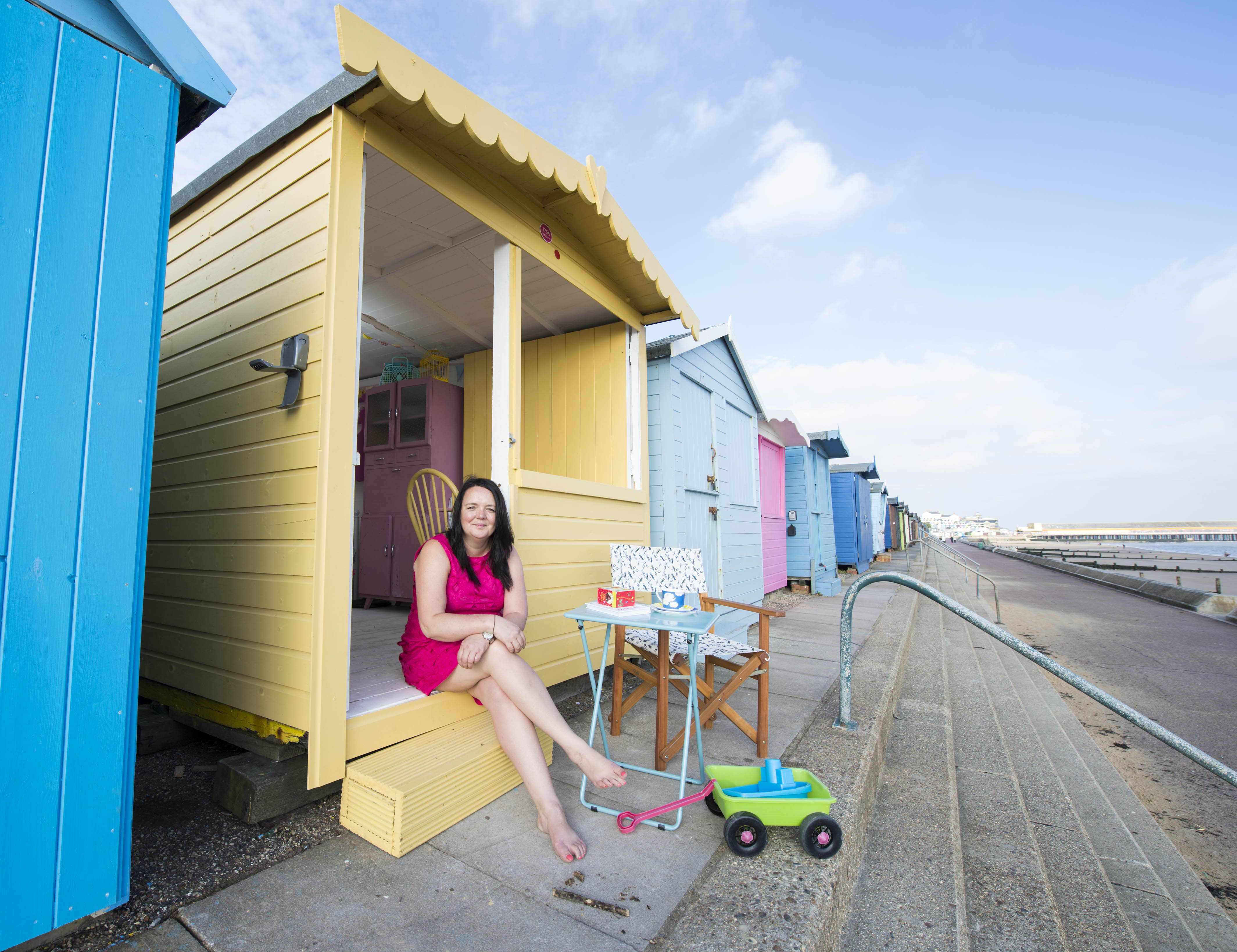 “But even though I’d lived all my life by the sea, I’d never ever seen a beach hut. They don’t have them where I live in Scotland. The very first time I saw one was on a weekend break in Walton-on-the-Naze in 2015.

“I noticed a new development of huts being built and only half of them had been sold. They were all uniform with portholes and nice, bright colours. I had money saved and decided to go for it, buying my very first beach hut for just £12,500.”

Vicky began renting it out when she wasn’t using it — calling her business Millie’s Beach Huts, which was named after her dog. She says: “At the time I wanted to cover some of my costs — around £600 in licence fees and maintenance per year.

The huts have allowed me to live a lifestyle that I enjoy without the same pressures.

Three of Vicky’s huts have appeared on Channel 4’s Interior Design Masters and she has had celebrity visitors including cleaning influencer Mrs Hinch to one. Vicky says: “Mrs Hinch stayed at one of my huts. She has such a huge social media following it blew up my social media and bookings went through the roof.”

Vicky says that renting out huts alongside running a dog-grooming service has helped change her lifestyle.

She says: “I went from not understanding how there was going to be a way out of a high-pressured finance job, to this paying my basic costs. The huts have allowed me to live a lifestyle that I enjoy without the same pressures.”

A crocodile from Gambia, two hippos from Liberia & an elephant from Cameroon are some of the animals gifted to the Queen