Home » Fashion » His Dreams Came True, Despite the Pandemic

Jimir Reece Davis’s 2020 wasn’t going well even before the pandemic hit. In January, he found himself homeless in Los Angeles after his living situation became untenable. Then his mother, who has epilepsy, had a bad seizure and was hospitalized. So, he decided to pack his bags and return home.

Everything that could go wrong seemed to be going wrong for Mr. Davis, a 23-year-old D.J. who goes by Amorphous. Little did he know, his dreams were about to come true in mere months.

On Thanksgiving, Mr. Davis filmed a video of himself mixing Rihanna’s “Kiss It Better” with Luther Vandross’s “Never Too Much.” Intertwined, the two tracks sounded familiar and warm, like the kind of song you’d hear a block party on a balmy spring day. In the video, he sports a black T-shirt with an image of Aaliyah’s face on it and he’s grooving to the sound of his mix.

“I’ve been doing mash-ups for a while. They come to my mind when I am bored,” Mr. Davis said in an interview. “I do it for fun. I am always listening to music in my head.”

The response on social media was immediate: Mr. Davis’s mix had gone viral. To date, the video has been played more than 2.6 million times, over 100,000 people have liked his tweet and it was shared more than 30,000 times. Superstar producers and artists like Missy Elliott, John Legend, Issa Rae and LL Cool J congratulated him on the mix and encouraged him to keep going.

Less than a month later, when he tweeted that his laptop had stopped working, Oprah Winfrey sent him a replacement with a note that read: “Thank you for bringing joy to the world your way. ​I hope this helps you continue.”

Mr. Davis’s world shifted again when he received a call from Fat Joe, who loved his new mix and wanted to use it for a song.

“When I heard it, I was like ‘Yo, this is amazing,’” Fat Joe said in his slack jawed, New York City accent. “We were influenced by him. The kid is a genius, man, he’s done things that nobody has done before.” 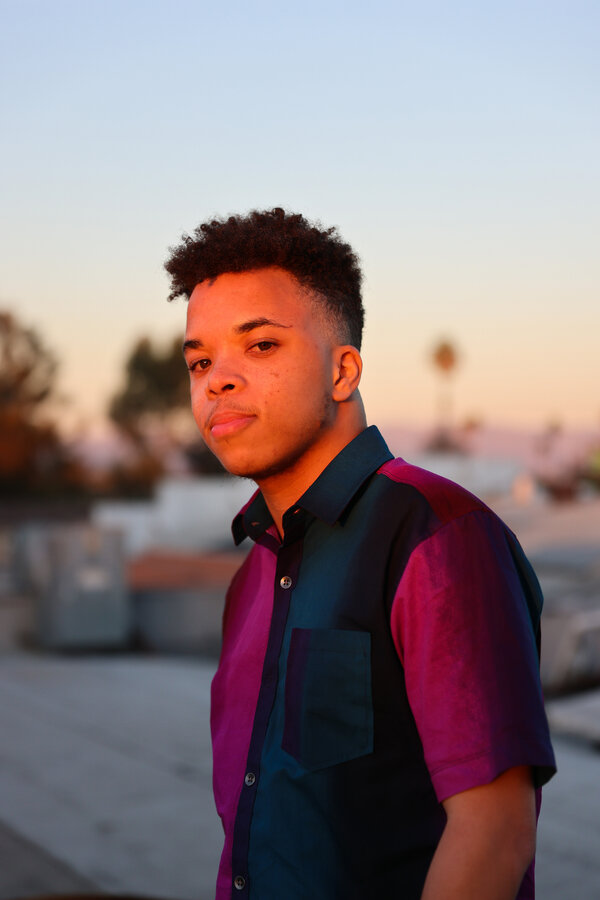 Fat Joe used the mix on his latest single, “Sunshine,” which was co-produced by Cool of the production team Cool & Dre. The video, which now has more than eight million views on YouTube, was shot in Miami in December and features Diddy and DJ Khaled in their yacht-life, silk-Versace-button-up best. Amorphous is on the boat, too, behind a D.J. booth, doing what he loves to do: mixing music.

Mr. Davis said he was a little intimidated during the video shoot. But he said he tried to be himself because “that’s how all this happened was by me being me.”

This wasn’t the first time Mr. Davis, who graduated from Full Sail University in 2018, had gone viral. But the response to this mix has been astronomical. He even managed to get the attention of Rihanna, the subject of a fandom-inspired documentary he made while he was in school. Mr. Davis said Rihanna reached out and watched the documentary.

In college, Mr. Davis studied film making, but his heart was always in his music. When he was three, he would rap along to Jay-Z songs at home. Later on, he taught himself how to beat box. At 11, he was teaching himself how to use production software like Beaterator to make music.

“I was kind of just using different free software,” Mr. Davis said. “I realized that I actually liked producing.”

Back in high school, he begged his father to buy him Ableton, a music production suite that at the time cost $1,000. His father did not wince at the price and got it for him; Mr. Davis spent all his free time learning how to use it.

All of his hard work paid off. In 2016, he began to share his mash-ups online. The Canadian R&B duo Dvsn liked one of his mixes and used it on their album “A Muse in Her Feelings.” The experience gave Mr. Davis a taste of the music production process and soon he set his sights on becoming a producer himself.

Things are finally falling into place for Mr. Davis. Now that “Sunshine” has debuted at No. 10 on the Rap Digital Song Billboard chart, he’s gained confidence and is looking forward to possibly collaborating with Chloe Bailey, one half of the R&B group Chloe x Halle, and the singer Kehlani.

“Amorphous is not only an incredible ear, visionary young artist, but is the most gracious humble deserving human being,” Kehlani said.

Mr. Davis still pinches himself every so often. He often re-shares his old tweets, from the days when he was hoping to have the opportunities he has now.

“Dreams do come true,” Mr. Davis said bashfully. “Even with the tragedy of the pandemic, I believe they can.”