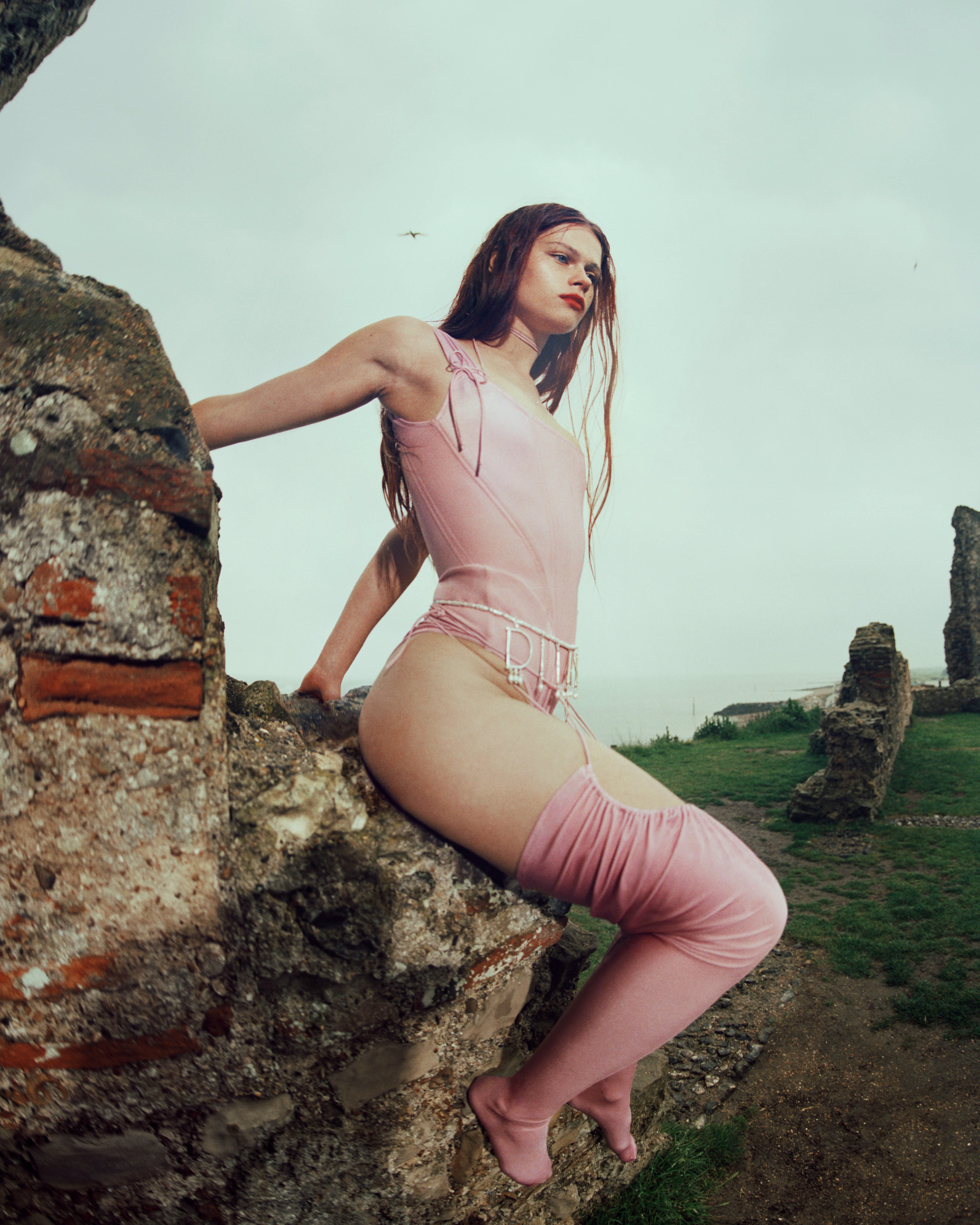 When the designer Dilara Findikoglu signs on to Zoom on a recent evening, she’s dining at an outdoor restaurant in her hometown of Istanbul with a friend from high school. While she’s based in London, her high-drama, Victorian-meets-Goth fashion line is produced here, and the Central Saint Martins graduate has spent the past couple of weeks between meetings and visits to the workshop. But tonight, she’s relaxing with a margarita that she lifts into the frame of her phone’s camera. “I’m kind of still celebrating,” she says.

Today, Findikoglu launches her first swimwear collection. The 30-year-old designer took her fanciful couture creations—adorned with ruffles, pleats, and all kinds of embellishments—and shrunk them down to bikini, rash guard, and one-piece size. Standout pieces include a corseted bathing suit with ribbons to tie around the thighs and a black bikini with gold chains.

For the lookbook, Findikoglu tapped director Yorgos Lanthimos to shoot images of models straddling jetties on the coastline. “It was an amazing experience, making something completely different than I have before,” she says. “I took my heavy clothing and intricate pattern cutting and translated it into tiny, little, pieces for everyone to wear.” In her Style Notes interview, Findikoglu, who says she’s also working on a lingerie line next, discusses her obsession with John Galliano, why Glenn Martens is the most important designer today, and loathing skinny jeans—despite being an emo kid at heart.

Tell me about the process behind making swimwear.

It’s so new for me because I’m used to working with non-stretchy fabric and using a lot of it—loads of texture and embroidery and embellishment. I’m a maximalist, and I wanted to translate that into swimwear. At the beginning, I thought it would be easy, but it was so difficult because it was a completely different kind of work: different machinery, techniques, and materials. The most important part was to make something lighter than what I’ve done before; lighter in both fabric and feeling. I didn’t want to make a collection with heavy commentary behind it, something that talked about social issues or problems in the world, because there are enough problems, and that’s what I do every season. This time, I just want people to have fun.

In an interview with W last year, you said you wanted to make clothes that everyone could wear, while still doing couture. Do you feel that releasing swimwear is a way to do that?

Exactly. I started thinking about this when lockdown started last year. I was like, what I make is beautiful but not everyone can wear a black Gothic Victorian dress on the street. Plus, rather than covering the body, right now we’re taking all the layers off—we’re removing weight off of our shoulders, and off our minds as well.

When I first started, I wanted to be out there making people see my world and understand what I had in my mind. Every collection I’ve made has some sort of heavy information: social issues, gender issues, female rights. I guess I have a lot to say. At the beginning of my career, I didn’t want to make anything wearable at all. But I grew up and I wanted to make them a bit more wearable from a business standpoint. We can’t do shows because there’s no fashion week [in London], but people who are going to wear my swimsuits this summer will give me the show I need. This season, I’m changing the roles. I want to see all the pretty girls around the world wearing my stuff.

Could that be a hint as to how you’re going to showcase your swimsuits during fashion week?

Maybe! We made these little cards for everyone who buys the swimsuits, which say “Show us how you look.” I want to see how you look. The most important thing about making clothes is to make people feel amazing in them, feel powerful, brave, and beautiful.

Onto the Style Notes questions. What was your style like as a teenager?

I went through all the stages, from emo to Goth, and I tried to be a little punky as well, listening to Good Charlotte and stuff. Not real punk, but you know, teenage punk. I used to wear loads of stripes, and I couldn’t go out without my studded belts. My friends and I called our studded belts “security belts” because they gave us self-confidence. If we went to a rock bar and we didn’t have that belt on, we would feel really insecure.

What were the other kids wearing when you were growing up?

Not that many people dressed the way my friends and I did. We were really into twisted Alice in Wonderland styles; we used to dress each other up and do shoots in the clothes. And before MySpace, there was this website called Vampire Freaks where we posted the pictures. We didn’t have any followers, we were lame. Vampire Freaks was the place to go to get new style tips about being Goth. I still feel I’m still that 16-year-old emo from high school in some cases. I own the same pair of checkerboard Vans that I bought when I was 16. They’re fucked—they have holes and stuff, but I still wear them.

Speaking of, what’s the most prized possession in your closet?

I own a real Playboy bunny costume from the 1960s. I bought it from this woman in London, who got it from her husband’s dad because he cheated on his wife with this Playboy bunny, and he kept the costume. Apparently these are impossible to find because Hugh Hefner used to take back all the costumes. It’s blue velvet, and has the owner’s name sewn inside. I’ve worn it a few times in London, once to this Goth club called Slimelight. It used to fit amazing, but after a year of Covid-19, I don’t know if I can still say that.

What was your first major fashion purchase?

When I was in school, I was obsessed with Galliano, but I couldn’t afford it. So I bought a key chain on sale. It had his initial, a big G, on it.

Are there any celebrities or figures from pop culture that inspire you, fashion-wise?

When I was a teenager, I was obsessed with Mary Kate and Ashley Olsen. I constantly checked what they wore, the vintage stuff they were wearing to the Met Gala. They were mixing vintage and then would have a fucked up Birkin handbag. I feel like that stayed with me because I still really like super fucked up clothing. I wear a lot of Victorian garments every day. People always say, “Do you know there’s a hole on your dress?” I’m like, “There are holes on all my dresses.” And I have stains on all of my stuff.

Where is your favorite place to shop?

I don’t shop anymore, to be honest. I only wear vintage, or I wear my own clothes. But some of my favorite vintage pieces are McQueen pieces, I have loads of Mugler skirt suits, and old Dior Galliano stuff. And Alaïa—my favorite.

Do you have a favorite designer right now?

My favorite brand is Y/Project. I really, really appreciate Glenn Martens as a designer. He’s so different than any other designer at the moment. He’s very good—his cuts and everything are really different. I only buy his stuff if I’m buying anything new.

Britney Spears performing “I’m a Slave 4 U” at the MTV VMAs, for sure. I’m really into exotic dancers from the 1920s, Turkish belly dancers and stuff. So that moment was the 2000s meeting Turkish culture, which is really me.

When I was studying at Central Saint Martins, I wore sportswear for a while. I’m not a sporty person at all. I think I wanted to look tough and didn’t want to look too girly, although I’m honestly quite feminine. I wanted to be sexy, but in a boyish way. I was wearing loads of awful baseball t-shirts, a baseball jacket, a baseball cap—all this stuff I want to forget.

I have a lot of those. First of all, skinny jeans. I really don’t like skinny jeans; I think they’re difficult to wear. We loved them when we were 16, but…

I thought you were emo—what do you mean you don’t like skinny jeans?

We used to wear skinny jeans, back when we were, like, 15. It was so bad. Skinny jeans were cool back then, but right now, babe, they’re not for everyone.

ellesse and F-LAGSTUF-F Link Up For Vibrant Collaboration

Find Out Why Our Editors Love This Cambridge Satchel Co. Crossbody Bag For Fall