#ChangeFashion, an initiative focused on fighting racism and long-standing systemic issues in the fashion industry, has been established by Color of Change, Joan Smalls, IMG and the Black in Fashion Council.

The initiative invites companies to take responsibility for their impact on the world and provides steps to ensure the industry is working toward racial justice rather than against it.

#ChangeFashion marks the third iteration of a multi-industry racial justice accountability franchise from Color of Change, the nation’s largest online racial justice organization. The first was the #ChangeHollywood initiative that Color of Change released with Michael B. Jordan in partnership with WME and Endeavor Content, sister companies to IMG. The second, #ChangeMusic, is being executed with the Recording Academy.

The partnership combines IMG, Black in Fashion Council and Small’s understanding of the industry with Color of Change’s racial justice and corporate accountability expertise. Together, they have created an industry-specific road map that speaks to the racial injustice within fashion. The road map’s key recommendations are to champion representation of Black individuals in the industry; develop inclusive content for creative consumption and marketing; create an equitable workplace; engage more openly and effectively with Black communities, and invest in Black safety by reassessing relationships with police and security within the industry.

“The #ChangeFashion road map is the resource we’ve been needing, for both my industry peers and the brands and executives we collaborate with,” said Smalls, IMG model, activist and founder of DonateMyWage.org. “We have to start putting actions behind our words. We cannot sit back and hope that change will come, we must be the force that makes it happen. Making changes can be difficult but the purpose behind the #ChangeFashion road map is that no one person or organization has to act alone. This resource will push the boundaries of what fashion is capable of, empowering all of us to be the force for good we desperately need.”

Among the road map’s recommendations:

• Divest from the police. The road map recommends that companies hire independent security services instead of using the police department for security in all instances wherever possible. It suggests, where possible, to use one’s voice to keep up the pressure on local governments to reduce spending on police and prisons, to adopt changes in the criminal  justice system and to shift investment to Black communities.

• Invest in Black representation and portrayals to elevate Black creatives, models and behind-the-scenes talent. One recommendation is to advocate for hiring cultural consultants and partner with issue experts to help ensure authentic portrayals of Black people. In addition, they recommend advocating for creating a dedicated budget for producing and marketing content representing a range of authentic Black stories, while ensuring there are multiple senior-level Black executives with decision-making authority.

• Develop Black talent and careers, and advocate for funding anti-racist training, independent racial justice audits of workplace culture, and the adoption of pay equity and anti-racist workplace policies and practices. Other recommendations are to disclose information about staff diversity, establish proactive recruitment, support, retention and training measures for Black people at all levels, including LGBTQ Black people within companies, and increase the number of Black people in leadership.

• Engage with Black communities in the cities in which companies operate and support Black businesses. The road map suggests contracting with Black-owned and Black-led businesses, especially in sectors that have traditionally excluded Black people, and encourage the organizations with which one works to maintain a roster of black businesses for connecting services. They also recommend partnering with brands that are in alignment with anti-racist social justice values, and to commit to supporting programs and community initiatives that elevate, support and empower Black communities. 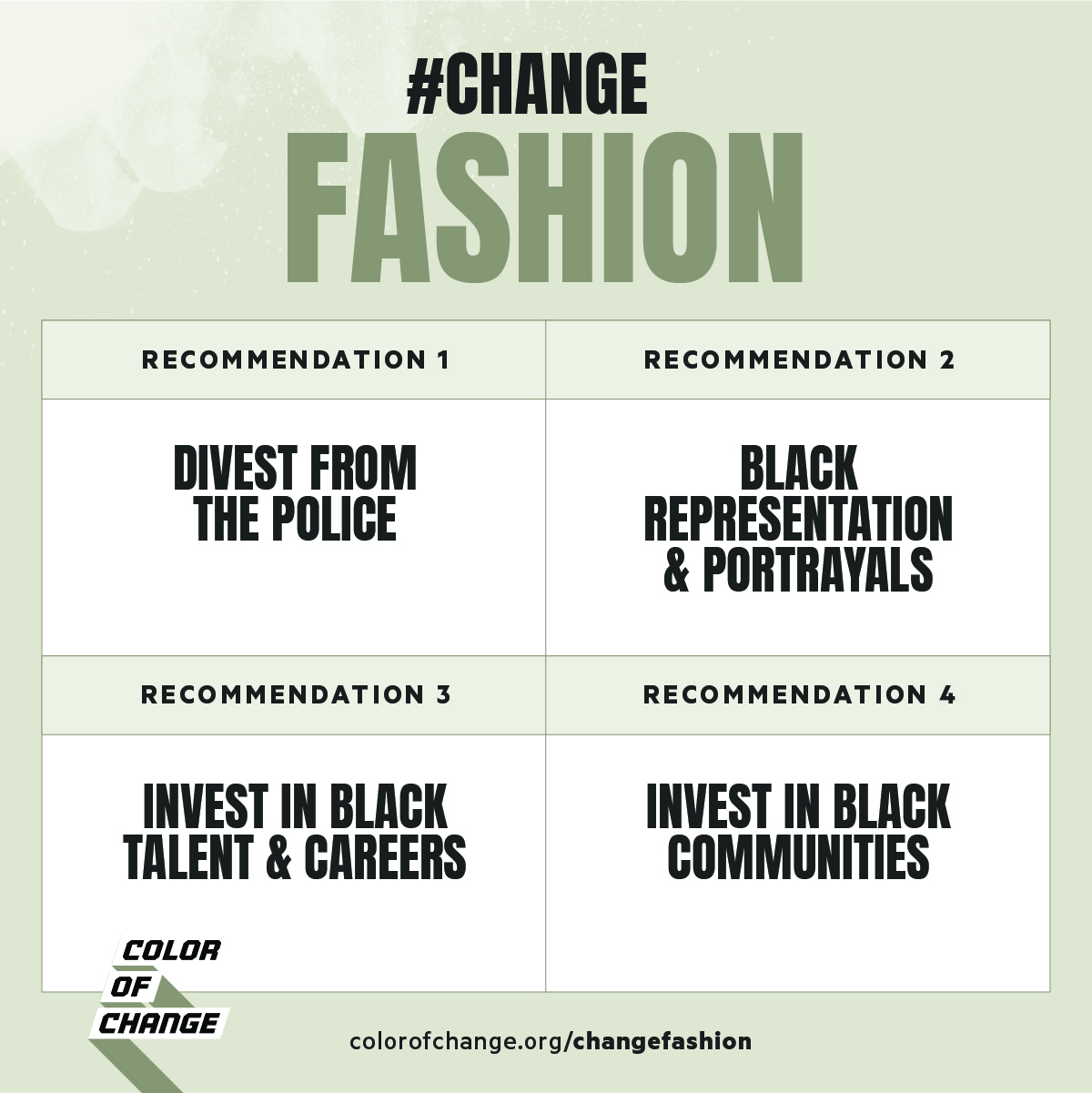 Sandrine Charles and Lindsay Peoples Wagner, cofounders of Black in Fashion Council, said in a statement, “Black in Fashion Council is excited to partner with the #ChangeFashion initiative and expand on the ultimate goal of bringing radical change and inclusivity to the industry we care about most. Developing and sharing best practices and specific accountability guidelines is integral to creating the ecosystem that will enable all of us to thrive. In an industry rooted in collaboration and connection, joining forces is the only true path forward for racial justice in fashion.”

“We are proud to deepen our partnerships with Color of Change, the Black in Fashion Council, and Joan Smalls,  lending our network and resources to support substantive change and lasting reform in fashion,” said Ivan Bart, president of IMG Models and Fashion. “Meaningful change requites commitment from every corner of our industry, and we are committed to doing our part to foster racial equity and inclusion.”

Rashad Robinson, president of Color of Change, said, “Fighting racism can’t just be the trend of the season. And there are two fronts to the fight: ending the long-standing discrimination and mistreatment of Black creators and other professionals working across the industry and ending the long-standing pattern of misrepresenting Black bodies and diminishing Black lives, which perpetuates the dehumanization of Black people in society at large. The fashion industry has an important role to play in dismantling structural racism, and Color of Change is proud to work in partnership with any organization that is serious about doing what it takes to drive real change.” 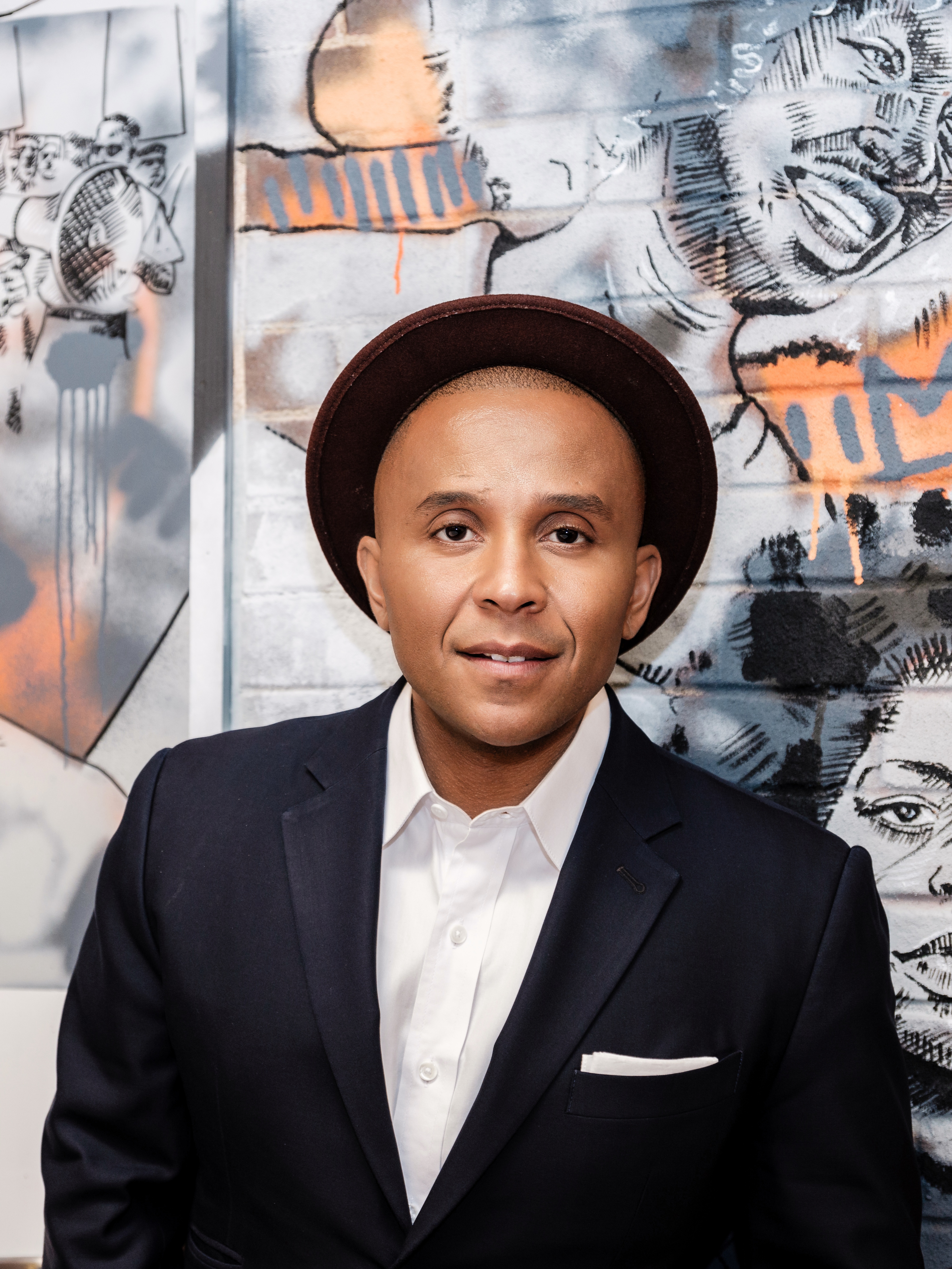 “We know we’ll get a lot of statements across many industries of intentions,” said Robinson. “Some of them will be well meaning and some of them will be of the moment to prevent backlash or to stay out of harm’s way. Part of what we’re trying to do here is recognize that if we don’t put some infrastructure around this and put some contours behind this, we will have allowed a bunch of people to make statements that they weren’t willing to wrestle with.”

“In no way do we think a road map means that we’ve gotten to some destination. But without a road map there is no destination to get to,” said Robinson.

Smalls, one of the most sought-after fashion models in the industry, was asked how she plans to get the brands to actually do something.

“I think it’s about continuing to apply pressure. I think sometimes they feel if they’re inclusive one season, it’s enough. I think it’s always important that the change comes from within the company, not just the visuals or the narrative that the rest of the world is seeing. That’s where true change comes,” she told WWD.

Asked whether brands should be required to be more inclusive when they cast projects, she said, “I don’t think it comes from a place where you should force people to do good, but it’s a reminder that they should. Sometimes people feel that their hand is being forced, but if it’s not at the forefront of your mind and your company, and you don’t know these decisions can influence a generation, then why not do it?”

She said it’s important to ask these brands why they have a lack of diversity, are they putting in an effort, and are they open to it. She feels many brands are doing a better job in the visuals with more people of color, more inclusivity when it comes to age and race and their campaigns are more representative of their consumer. However, she said, “A lot of times, fashion tends to give this narration of what beauty is and sometimes they can be a bit narrow-minded.”

When asked if she feels modeling agencies are doing a good job bringing more diverse models onto their rosters, she said, “I think it’s supply and demand. Often they didn’t feel the need to represent Black girls, or Hispanics or Asians if the market wasn’t wanting it. So therefore they didn’t care to have these girls, or you’re just wasting space and energy and you’re not booking anything. I feel that now, because brands are requiring more diversity, there’s more room for that.

“You need to look within the agencies and see how many people of color do we have? I can tell you for the most part, I can count them on one hand,” she said. She said a lot of the change has to come from hiring more diverse people who work in the agencies.

“The fashion industry tends to be elitist and it’s hard to break through because it’s based on relationships,” said Smalls. “A lot of the time, they just continue to nurture those relationships, so there’s no room for new talent. When it comes to hair, makeup, styling, it’s just like a clique that continues going from one place to another. Sometimes even with me, when I try to push someone I work with, who’s a person of color, there’s a push-back because either the photographer or stylist has never worked with them, and they want to work with the people whom they trust. I understand because you have that comfort and rapport from working with someone but at the same time, OK, give me the opportunity because if I’m vouching for them it’s because I’ve worked with them, and I have a good eye of what talent is,” said Smalls.

Smalls believes there’s a lot more work to be done in the way Blacks are portrayed in fashion advertising. “I love the inclusivity and they’re giving more opportunities not only because of their skin color, but the way they look. I think there’s more openness for that and I think that’s great. A lot of the times where I think they’re missing the mark is they’re not being portrayed at their best. With certain images, I haven’t felt that people of color have been highlighted to their full potential of their beauty or given the same…it’s almost like ‘this is how we see you’ and it’s almost a watered-down version to what they usually do to people who aren’t Black. Black people, they strip them away and it’s more simple. Even the lighting. This is the one thing that has been irking me the most is the lighting has been so awful. Not only don’t their features look good, but their skin color looks dull. And I find that highly offensive,” said Smalls.

Overall, she said, brands should be held accountable.

Asked whether her situation has gotten better over the years, she said, “My career has been different. It comes in waves. One thing I’ve always been grateful for is having the opportunities a lot of women didn’t have when I was coming up. Sometimes there was just one or two of us and a lot of time I was the token. I’m flattered and grateful people saw me for more than just the skin complexion and were champions of me.

“It takes a lot of sacrifice and dedication and tears at the same time — trying to push forward to make sure you’re valued the same way,” she said.

Highly philanthropic, last year Smalls launched DonateMyWage.org, a project that furthers her support for Black Lives Matter organizations. In June, Smalls committed to donating 50 percent of her salary for the remainder of 2020 to organizations advancing racial equality and justice.

“I will still devote to causes that speak to me, and need more attention and need resources,” she said.

IMG and the Black in Fashion Council Strengthen Their Alliance

When It Comes to Diversity in Fashion, There’s  Lots of Work to Be Done