Home » Fashion » Becoming a Woman Before Their Eyes

The American bat mitzvah has never been more widely broadcast than in 2019. 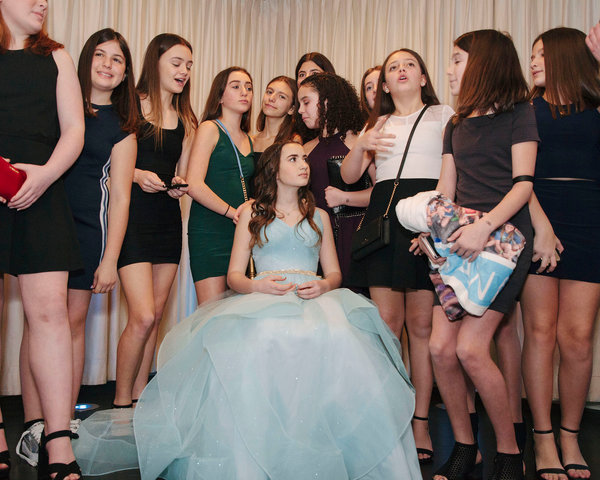 Judith Kaplan Eisenstein didn’t celebrate her bat mitzvah in a hotel ballroom with a D.J. or an open bar for her grown-up guests.

Instead, Ms. Kaplan Eisenstein, who in 1922 was the first American girl to become a bat mitzvah in a public service, simply read her Torah portion in both English and Hebrew from a book-bound Chumash, or bible, and went home.

Gender-based outrage over her ceremony quickly followed, but the dissent didn’t seem to bother her. “No thunder sounded. No lightning struck,” Ms. Kaplan Eisenstein later said.

Her quietly trailblazing ceremony has helped make bat mitzvahs as common as the Jewish coming-of-age ceremonies are for boys, and could be considered a first step in the gender-neutralization of this rite. Each year thousands of 12- and 13-year-old girls lead their congregations in a service and Torah reading, and share take-aways from the text in a speech. Sometimes the bimah, or altar, is elevated like a stage, and the house lights are turned on so the bat mitzvah can see a room full of eyes — some familiar, some not — staring back at her.

That aspect was daunting for Paige Utley. But the 13-year-old, who lives on the Upper East Side of Manhattan, knew it was part of the deal.

“It was kind of nerve wracking,” Paige said. “Especially with all my family and friends and random people I don’t know listening to me say this language that means a lot to them. But at the same time, I worked so hard for this. So I took a deep breath and showed them what I’ve accomplished.”

It’s a performance that would be reasonably stressful at any age, and a growing number of Jews are now deferring the ceremonies until later in life, when their religious identities have had time to form. Still, the majority of bar and bat mitzvahs take place while their celebrants are in the throes of puberty. Like a quinceañera or a sweet 16, the event is meant to mark a transition from youth to adulthood, specifically within the Jewish faith. But for a middle-schooler, most adult responsibilities — religious or otherwise — lie far ahead.

“It’s a big milestone in my life to become a bat mitzvah,” Paige said. “I feel like I have more independence and whatever, but I don’t feel like I need to now get a job. I don’t have to pay rent and pay taxes.”

Jonathan D. Sarna, a professor at Brandeis University and a scholar of American Jewish history, said the tradition of celebrating a bat mitzvahs didn’t pick up until after World War II, when the G.I. Bill brought about an influx of wealth and the expansion of suburbia. All of a sudden Jews, who were long unwelcome in the outskirts of big cities, were able to leave their multigenerational households and move their families into sprawling homes. And where the Jews went, so too went the synagogues.

Rabbi Carole Balin, a professor emeritus of Jewish history at Hebrew Union College, said that rabbis were largely happy to oversee bat mitzvahs. Not only did the events increase attendance at Friday-night services — they also brought a new hope for a bar mitzvah that had seemingly become overwrought with materialism. It became customary for a party to follow the service, and for boys to buy new suits and expect expensive gifts.

“If Bat Mitzvah will remain a modest, dignified religious observance, it may well be instrumental in helping to return Bar Mitzvah to its traditional Simkha Shel Mitzvah,” or joyous fulfillment of a commandment, wrote Rabbi R.A. Ohrenstein of Knesset Israel Congregation in Pittsfield, Mass., in 1960, according to “Women and American Judaism: Historical Perspectives,” co-edited by Dr. Sarna and Pamela S. Nadell.

But Rabbi Ohrenstein’s austere ideal has largely been abandoned in favor of flash. Bat mitzvah receptions are now documented not only by professional photographers and videographers, but also their teen attendees, on Instagram, Snapchat, VSCO and TikTok. Accordingly, the stakes of a bat mitzvah have risen. The most extravagant of these parties might include musical guests — Shawn Mendes, Drake and Nick Jonas, for example — and conform to campy themes like Cirque du Soleil and Candyland. Bat mitzvahs have been known to take place in New York City nightclubs, on yachts and, in some cases, in faraway destinations. They are, in short, a spectacle.

Before Gabi Ivler, 12, of North Caldwell, N.J., made her grand entrance in the ballroom at the Crystal Plaza in Livingston, N.J., her friends wielded their phones in anticipation. Two fire dancers had just warmed up the room for the guest of honor. When the doors opened, the bat mitzvah girl skipped, arm in arm with motivational dancers, to the center of the floor, while her friends recorded the moment.

“We Snapchat and write like, ‘Mazels!’ and ‘Congratulations!’ or something,” Gabi said, explaining the obligatory social media posts she and her friends share at these events.

Gabi’s parents had made custom geofilters for Snapchat, so people watching attendees’ Stories would have no doubt whose affair was on display. (Gabi’s dad also proudly told me he purchased a geofilter for his home, where that night, 18 of Gabi’s camp friends would be staying over for an after-party sleepover.)

Oftentimes there is an internalized expectation that the party — not unlike a wedding — will be perfect. It’s not uncommon for parents to project their ambitions onto their children, who may be perceived as a reflection of their success.

“Sometimes parents put this on in order to demonstrate that they have made it,” Dr. Sarna said.

Though they opted for a grandiose reception, Gabi’s parents decided that a private service would be more intimate and take pressure off their daughter.

“We only invited close family and friends,” Gabi’s mother, Lisa Ivler, said. “It’s so much nicer and quaint. We loved it.”

But Gabi said she didn’t feel all that connected to the religious aspects of her bat mitzvah. She was more excited for the party — and to no longer attend Hebrew school.

“I was mostly looking forward to dancing with everyone and having a good time,” Gabi said.

Ms. Ivler, who also happens to be a bar and bat mitzvah planner, wanted to go all out for her third and youngest child’s party. The events she works on typically have budgets in the $40,000 to $150,000 range.

As guests trickled into the venue they were greeted by disembodied hands holding cocktails through cutouts in a makeshift wall. When they turned the corner and walked through the ballroom’s French doors they would see a redheaded woman in sequin shorts perched on an elevated hoop and holding a bottle of champagne. To her right was a brunette whose skirt was made of champagne flutes.

The ballroom was designed with Gabi’s younger guests in mind. Instead of formal tables, the kids’ section was a lounge, which included a bar with signature blue mocktails with gummy bears dropped inside, light-blue couches and high-top tables and chairs with matching light blue seat covers. A gallery of Gabi’s professional portraits lined the walls.

There was no question whose party it was. A logo had been designed for Gabi (her name and a rose, symbolizing her middle name) and stamped around the room. There were custom pillow cases and cubed centerpieces plastered with more glamour shots and topped was a golden, glittery “G.” Everything had its place — including the personalized napkins in the bathrooms and messages on the mirrors encouraging guests to “like my Insta,” “Snap me,” “apply lipstick” and “wash hands.”

Gabi’s dress was Cinderella-like: baby blue with an overlay of shimmering tulle that cinched at the waist with a gold sequined belt. As Gabi walked, her dress flowed around her. Twisted strands of her softly curled hair were pulled away from her face, showing off her unblemished skin.

“It was very important for me to go overboard,” Ms. Ivler said. “It was almost because I had to show off. It was a showcase. It needed to look good — I want to get hired by other people.”

Farin Fox, 13, of Glen Rock, N.J., did not have quite as big of a bat mitzvah blowout. Still, her mother, Robyn, said the preparations “felt like more work than planning my wedding.”

First there was the service though. Farin had been studying for months. In addition to her regularly programmed Hebrew school, she also attended weekly lessons to prepare to chant her Torah and haftorah portions and attended services every Thursday to learn the prayers.

Farin said she was most worried about messing up and speaking in front of everyone.

“It was actually fun,” Farin said. “And it was exciting as I was getting deeper into the service and reading from the Torah.”

Paige walked away with a similar feeling. Despite a few slip-ups, she said she “had an amazing time.” And when she tripped over some words, she laughed at herself.

“The cantor was like, ‘I have never seen someone look so happy to have made a mistake,’” she said.

Model Aaron Rose Philip Is Changing Fashion for the Better

More Than 24,400 Amazon Shoppers Have Given This "Incredible" Purple Hair Mask a Perfect Rating