AN ADULT film star  addicted to plastic surgery feared she was going to die after suffering a severe reaction to lip fillers.

Just moments after Kirsty Collins, 33, had the jab to plump her pout her lips ballooned to nearly four times their natural size. 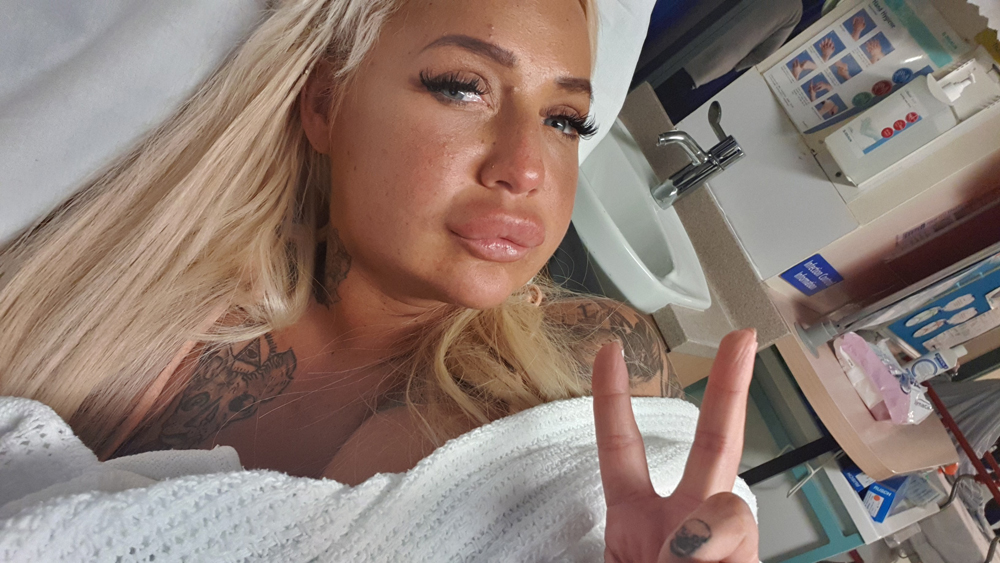 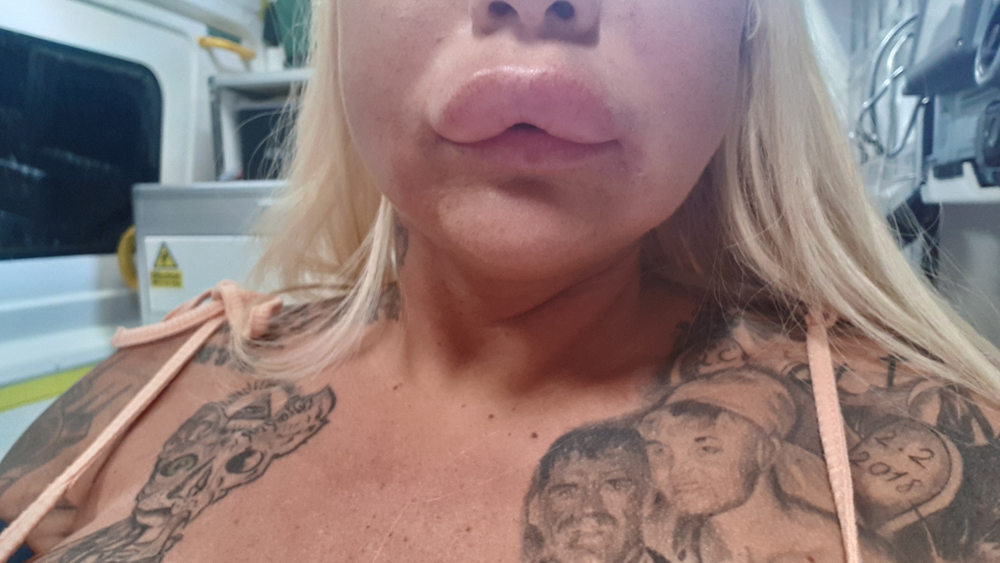 "Within seconds of the beautician injecting my upper lip, I felt this burning sensation begin to spread across my face," said Kirsty, known as Bambi Black to her fans.

“The next thing I knew, my upper lip was growing before my very eyes.

"I could see and feel it getting bigger and bigger.”

The £300 treatment was designed to break down old filler in Kirsty's lips.

Her nightmare began on April 2 following an unsatisfactory lip job at a new clinic.

Kirsty, from Sheffield, wasn't happy with her new pout so wanted to have a procedure to remove the old filler which would then allow her to start again with new, better fillers.

She was advised to have a hyaluronidase injection – a naturally occurring acid, that that breaks down filler naturally. 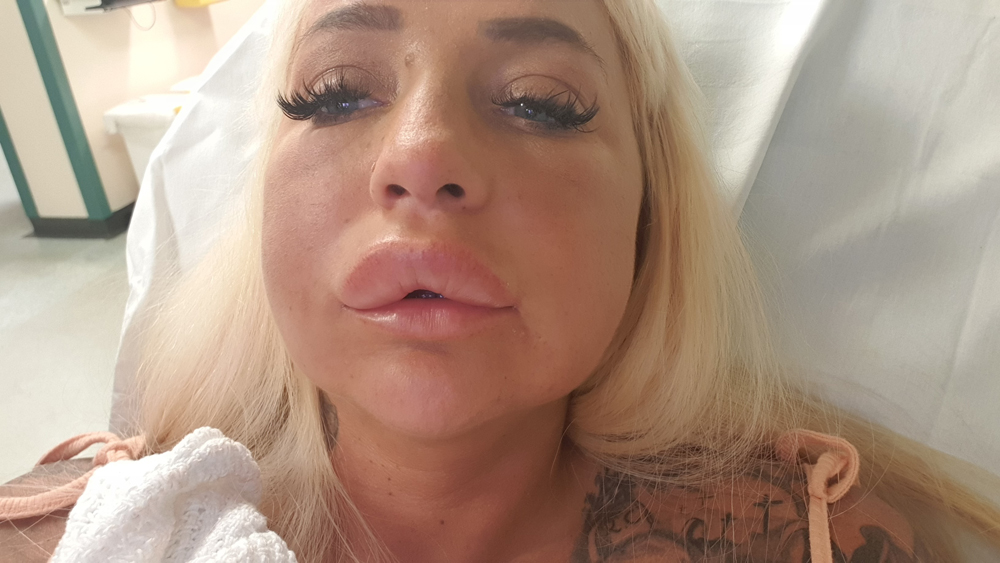 But within minutes of having it injected, she started to feel as though her heart "was beating right out of (her) chest".

She continued: “I’d heard about people having allergic reactions to all sorts before.

"I immediately began to worry that the numbing sensation spreading across my lips would reach my eyes or throat.”

Fortunately, her manager Jamie Allen was on hand to call an ambulance straight away.

“Given my line of work I know how to keep a cool head in these situations,” Jamie said.

“As soon as I saw the swelling, my first concern was making sure we had it under control before it started to spread any further.” 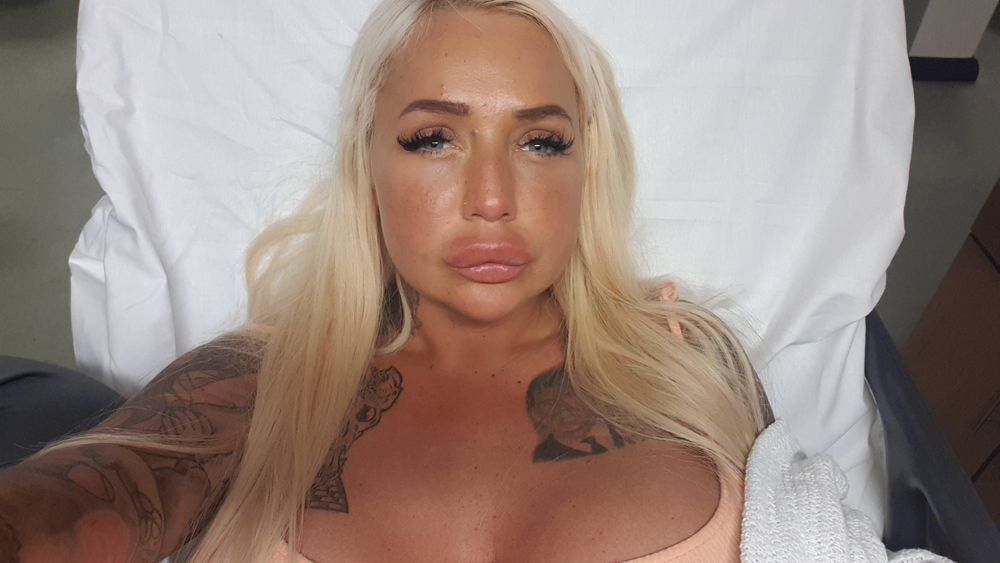 When they arrived at Doncaster Royal Infirmary, Kirsty was given two shots of adrenaline, a dose of antihistamine and steroids.

"I was so frightened, I even feared I might die," said Kirsty.

After seven long hours, she was eventually discharged – at which point, docs told the actress that she'd had an allergic reaction to the enzyme.

"It really made me realise that you are putting your life in the hands of someone else every time you have cosmetic work done," she said.

“Now whenever I’m being injected with a substance I’ve never used before, I’ll be sure to do a patch test first to ensure there isn’t an adverse reaction.”

Within a week, her lips went back to normal and she's been sharing her story on social media in a bid to educate others.

But not everyone has been supportive.

“I was touched by all the fans offering their support,” Kirsty said.

“But it’s hard not to notice all the trolls out there, calling me ‘trout pout'.

“At the end of the day this is how I choose to look, and I shouldn’t be judged on that.” 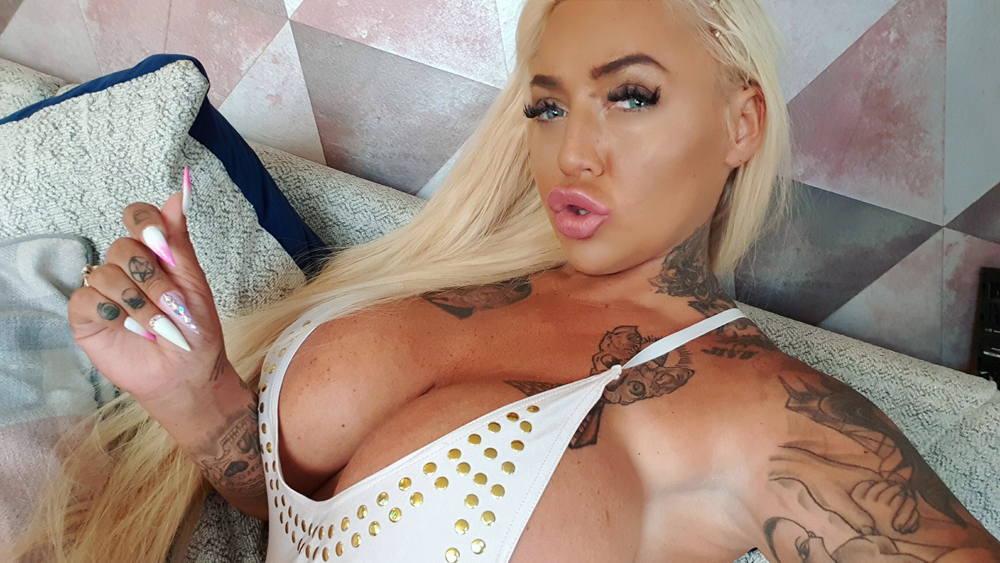 No stranger to a cosmetic nip and tuck, Kirsty has already spent at least £30,000 on Botox, lip fillers, cheek fillers, two boob jobs, liposuction and is currently on the waiting list for a £3,800 Brazilian butt lift.

Former glamour model Kirsty began remodelling her look when she started getting involved in adult film work seven years ago.

She said: “The industry demands that stars have cosmetic surgery, there’s no two ways about it.

“If you want to stay on top of the game, you’ve got to beat the competition, and the only way to do that is by getting bigger and better – quite literally.” 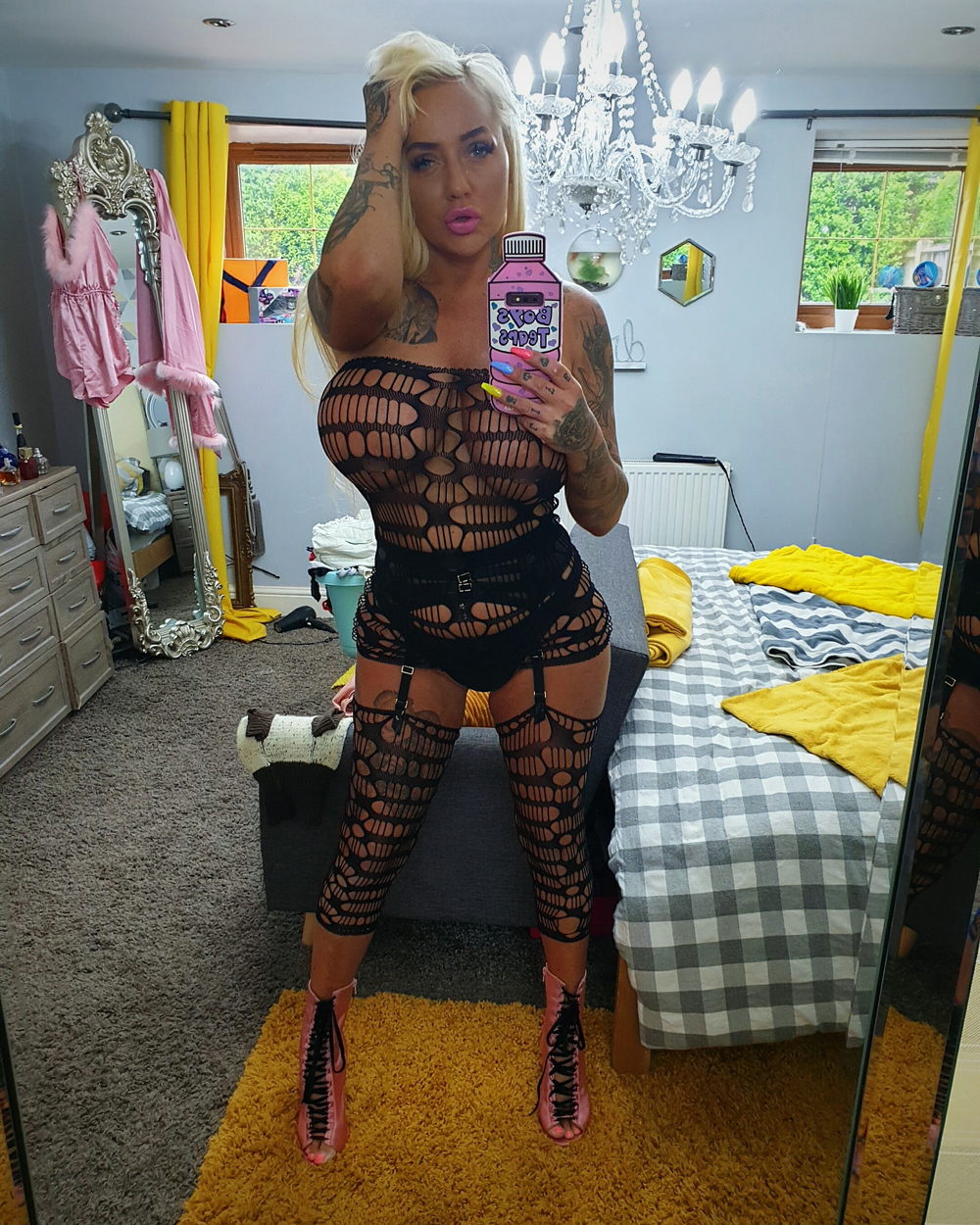 Kirsty said doesn't blame the practitioner who conducted the procedure, instead saying that she'll always do a patch test in the future.

Leading cosmetic doctor Dr Aamer Khan, co-founder of Harley Street Skin (which is not where Kirsty had her treatment), warned that allergic reactions can happen.

He said: “Hyaluronidase is the substance used to remove filler and in rare cases it can cause an allergic reaction.

“At Harley Street Skin we do a patch test to establish whether the client is allergic to the substance.

The risks: Unregulated lip fillers could cause blindness or a stroke

Doctors have warned over the deadly side-effects associated with unregulated lip fillers – which can cause blindness or a stroke.

Leading cosmetic doctor Tijion Esho, founder of the Esho Clinic, said people can cause "catastrophic" damage to themselves by jumping on the filler bandwagon.

He said: "From hematomas to infections, abscess and tissue necrosis (where blood vessels become blocked with filler leading the tissue in that area to die), there are so many consequences to consider.

"People can go blind and suffer a stroke.

"There's a risk of infection, abscesses can form and tissue necrosis is also a risk. People can be permanently disfigured.

"My fear is that something really bad will happen before people take note, which is why I'll always be fighting for legislation."

Kirsty isn't the first person who's seen their lips blow up from fillers.

We previously reported about Rachael Knappier, who says she woke up the next day to discover her lips had swollen to four times their normal size after having the £220 fillers done.

The beautician had injected the filler into an artery, which caused her lips to swell massively.

The 29-year-old, from Leicestershire, had to be rushed to hospital and after 72 hours, the filler dissolved and thankfully they went back down to their usual size.

A Department of Health and Social Care spokesperson previously said: “Anyone considering a cosmetic procedure should take the time to find a reputable, safe, and qualified practitioner, and make sure they understand the impact of any treatment on their physical and mental health.

“We’re working to improve the safety of cosmetic procedures, through better training and clear information so that people can make informed decisions about their care.”

"We also insist that all clients remain with us for an hour after the treatment to ensure they do not have an allergic reaction.

“Our staff are equipped with Epi pens and would immediately take a client presenting a problem to hospital in extreme cases. Fortunately, it is a rare occurrence.”

As for Kirsty, she's already got her next round of lip filler scheduled in for next week.

"I love plastic surgery and I always will.

"I've got a Brazilian butt-lift planned for later this year and I'm already looking at my third boob job.

"Knowing me, I'll be on my death bed asking for one last nip tuck."

Find Out Why Our Editors Love This Cambridge Satchel Co. Crossbody Bag For Fall