Home » Celebrities » Yikes! Jason Derulo Appears to Chip His Teeth While Eating Corn on the Cob

Jason Derulo, are you OK? The “Swalla” singer seemingly caused injury to his two front teeth while filming a TikTok.

Derulo, 30, found an innovative way to eat corn on the cob while in the midst of quarantining from home amid the coronavirus pandemic on Tuesday, May 19. He placed the cooked item onto a power drill, which he switched on and proceeded to nibble away at the corn.

“Hey, have y’all seen this? I’ve always wanted to try it,” Derulo said in the clip before attempting the action, while also cautioning fans in the caption, “Don’t try this 😭😭😭.”

The Cats actor suddenly stopped what he was doing and let out a yelp. From there, he pulled away the food item to reveal what appeared to be majorly chipped front teeth.

The viral moment from Derulo caught the attention of Chrissy Teigen, who jokingly referred to the “Watcha Say” crooner as “jathon dururo” via Instagram. “I feel like I made this exact joke before lol,” she teased in her Instagram post’s comments section on Tuesday.

“I love him so much ever since lip sync battle,” she shared. “He is epic and so talented lol.” 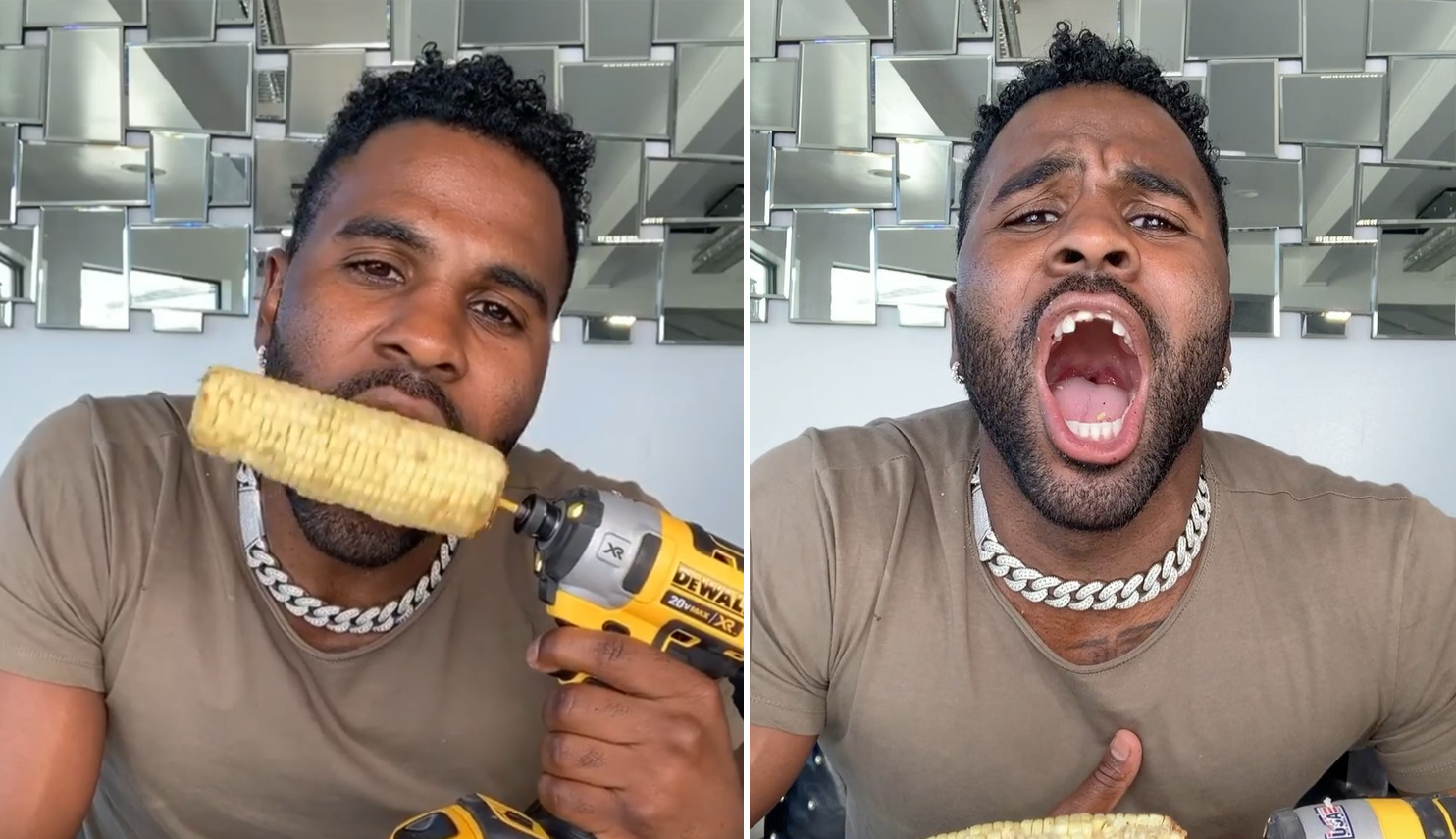 Jersey Shore’s Mike “The Situation” Sorrentino noted beneath the 34-year-old Cravings author’s post of Derulo that “we got a Situation.” Katie Couric, for her part, asked: “Am I the only one who can’t figure out how he did this? 😳.”

Derulo posted a follow-up TikTok hours later, during which he covered his mouth as he spoke with a pal about the damage he had apparently done. “Yo, for real. How much do you think it’s gonna cost to fix?” he asked his friend on Tuesday, while she replied, “You don’t have to fix it, it’s fine.”

Late last November, Derulo went viral for posting a photo that put the outline of his manhood on full display. Two weeks later, the photo was removed by Instagram for violating its community guidelines. At the time, a spokesperson for Facebook — the company that owns Instagram — said that the pic featured “aroused genitalia.”

Derulo later fought back against Instagram by uploading the photo once more. This time around, he placed a Subway footlong sandwich over his bulge.

The “Talk Dirty” singer also spoke out against Instagram’s removal in an interview with TMZ. “An arousal looks different. It’s a different vibe,” he explained to the publication in December 2019. “When it’s fully aroused, it’s a different beast. It leans more to the front. If it’s just on the side, and it’s just chilling on the side, it’s a semi vibe.”

Christina Aguilera Gets Honored as Disney Legend: ‘This Is Cooler Than a Grammy’

Viewers walk out of The Nightingale premiere after rape scenes