Home » Celebrities » Why Didn’t Kate Middleton And Prince William Join The Queen At Trooping The Colour?

For more two centuries now, there has been one big parade to mark the birthday of the British Sovereign: the Trooping of the Colour.

Since Queen Elizabeth II has been in power, the tradition has continued on, marking her birthday with a parade and festivities. According to the official royal website, the Trooping of the Colour includes hundreds of soldiers, musicians, and horses as they parade around London in celebration of the queen’s birthday. Historically, fellow members of the royal family will join in the festivities by watching and waving from the balcony of Buckingham Palace alongside the queen.

The 2021 Trooping the Colour looks a little different, however. In March 2021, the palace announced, via People: “The Queen’s Official Birthday Parade, also known as Trooping the Colour, will not go ahead this year in its traditional form in central London. Options for an alternative Parade, in the quadrangle at Windsor Castle, are being considered.”

As it turns out, the queen did indeed opt for a scaled down, smaller parade, which she attended on June 12. Of course, the parade itself was not the only thing that was scaled down — the amount of royal family members in attendance were minimal. So, why didn’t the queen’s close family members, like Prince William and Kate Middleton, attend the Trooping the Colour parade this year? Keep reading to find out why! 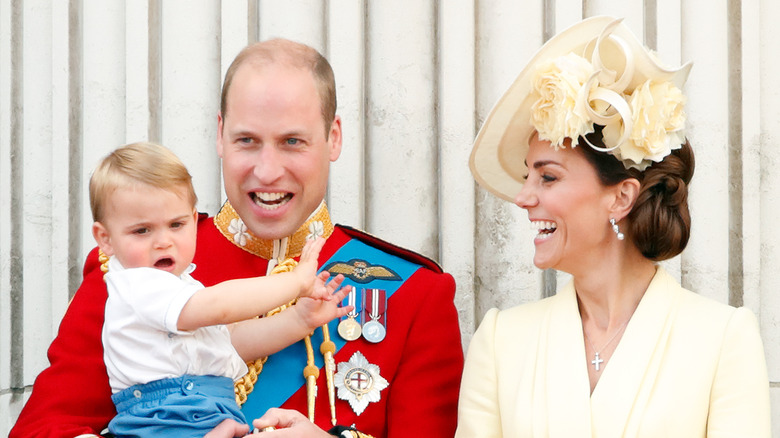 Every year, Queen Elizabeth II enjoys the Trooping of the Colour parade alongside her fellow royal family members to celebrate her birthday. In 2020, the parade was cancelled for the first time in decades due to COVID-19. And now, in 2021, the parade itself was cancelled once again for the same reason, though a smaller celebration did take place instead.

On June 12, Queen Elizabeth attended a scaled-down version of the parade at Windsor Castle, though only she and her cousin Prince Edward were in attendance, according to People. Typically, the parade would march right past Buckingham Palace, where royal family members, like Prince William, Kate Middleton, Prince Charles, Prince Harry, and Meghan Markle have watched from the balcony in the past. Because of COVID-19 restrictions, however, the royal family opted not to attend this year, much like last year.

Hopefully by 2022 the Trooping of the Colour will be back in full swing again, with the entire royal family there to celebrate Queen Elizabeth II’s birthday!