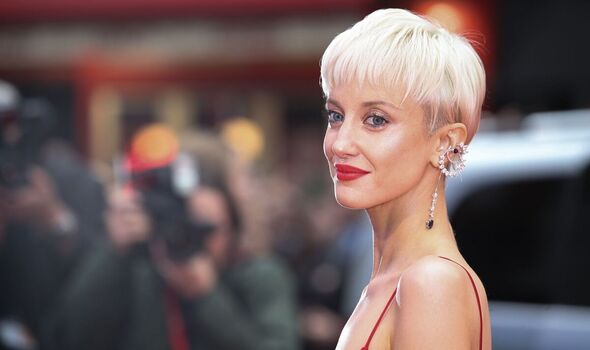 Andrea Riseborough was rummaging through her bedroom drawers, trying hard not to think about the Oscars, when, suddenly on Tuesday, she found out she’d been announced as a leading actress nominee. “I was busying myself trying to find a sock or something, just to take my mind off it,” admits the Tyneside-born actress who fervently eschews all that Hollywood glitz and glamour. She even quit movies for two years after filming acclaimed hit Birdman with Michael Keaton in 2014, feeling she’d got lost in the Hollywood machine.

ANDREA Riseborough was rummaging through her bedroom drawers, trying hard not to think about the Oscars, when, suddenly on Tuesday, she found out she’d been announced as a leading actress nominee.

“I think sometimes you can get really burnt out on something you enjoy doing, and feel like the sponge is completely wrung dry,” she admits. “It’s very different now, thankfully, and I have allowed myself to fall in love again with the purpose of what I am doing.”

Her 2023 nomination is all the more astonishing for a film that you almost certainly have not seen: To Leslie. The gut-wrenching drama, filmed during the pandemic, earned a paltry £22,000 at US box offices before quickly disappearing to streaming services and has attracted little notice since debuting at London’s Raindance Film Festival last autumn.

However, in a profession famed for its narcissism and insecurities, Riseborough is currently riding an unprecedented wave of support from Hollywood stars. Gwyneth Paltrow led the cheerleading, saying she deserves “to win every award there is and all the ones that haven’t been invented yet”.

Kate Winslet praised her for “one of the greatest performances I have ever seen in my life”.

Further acclaim has come from a whole host of actresses, including Charlize Theron, Jane Fonda, Demi Moore and Courteney Cox. Cate Blanchett called Riseborough’s performance one of the overlooked examples of acting this year.

But this 41-year-old, who grew up in Whitley Bay, is overlooked no longer. In To Leslie, she delivers a heartrending performance as an alcoholic Texan mother who wins the lottery only to booze away her fortune, losing her family, job and home. Shockingly, it is based on the true story of screenwriter Ryan Binaco’s late mother.

Riseborough painfully immersed herself in the role, admitting: “It’s riddled with deep anxiety and is difficult to get through. I weighed about 85 pounds! It was a deeply heavy, psychological space to live in.”

Portraying an alcoholic who alienates her family “was such a lonely feeling, made worse by the fact that we were all masked up and kept separate until the last moment on set”.

Not even on the Oscar radar three months ago, Riseborough has become the Academy Awards’ front-runner, rivalling Blanchett herself, who at one point seemed to have the golden statuette pre-engraved with her name for portraying an orchestral conductor in the movie Tár. “I’m astounded. I’m not entirely sure how the f*** this happened,” she says. “It’s such an unexpected ray of light.”

It’s hardly the first critical acclaim for the actress, who has appeared in films such as Brighton Rock, Never Let Me Go, and Oblivion, and the TV series Black Mirror. But it is the first time she has felt a tidal wave of Hollywood praise buoying her.

“It has been special to feel so supported by the community – especially by actors – and to feel like the work has broken through that,” she says.

Her Hollywood success is a world away from her own childhood. She was born in Wallsend, near Newcastle, into a family of miners and factory workers.

Her father, George, a car salesman, and mother Isabel, a beautician and secretary, sent their daughter to a private school that softened her Geordie accent, and she embraced youth theatre.

Expected to attend Oxford or Cambridge, she dropped out of school before her A-levels, citing boredom, and instead worked as a waitress, singer and greetings cards maker before attending elite London drama school RADA.

“There’s never been a point in my life where I’ve thought, ‘I absolutely have to be an actor’,” she says, having spent the past decade living in Los Angeles. “It just sort of happened. But I feel pretty clear that this is definitely what I’m supposed to be doing.”

Her chameleonic performances are steeped in authenticity, which perhaps reflects what she admits is her one failing: “I’m a really crap liar… Can’t lie to save my life.”

Nor is she an extrovert. “I don’t like talking much, which is really weird,” she laughs. “Picked totally the wrong job.”

She particularly enjoyed filming the 2018 horror fantasy movie Mandy with Nicolas Cage, “because we’re both very, very quiet. We often sat together in total silence.” Shakespearean-trained and voraciously literate, Riseborough is a deep thinker who one imagines could turn the choice between tea or coffee into a philosophical debate. She is frustrated by the public’s obsession with fame and beauty, urging: “If young women would be empowered with one thing, it would be: look unselfconsciously at the world.”

She admits to self-doubt, confessing: “It’s difficult sometimes. You think: ‘God, I’m f***ing crap.’ But, you know, it’s also not like working down a mine.”

As for her private life, she prefers to draw a veil over her years living with American artist Joe Appel, and her current relationship with French actor-director Karim Saleh, who she met when they co-starred in 2020’s Luxor.

Riseborough’s Oscar nomination is the culmination of two back-breaking years in which she filmed a staggering eight movies, ranging from the ebullient Roald Dahl’s Matilda The Musical – she plays Matilda’s awful mother, Mrs Wormwood – to the noir murder-mystery Amsterdam, opposite Christian Bale and Margot Robbie.

With increased Hollywood clout, she is now taking greater control over her career, rejecting movies that do not feed her intellectually. After playing title roles in the 2018 kidnapping drama Nancy, and as Nicolas Cage’s ill-fated girlfriend in Mandy, she starred in 2020 horror movie The Grudge but has no desire to return to that genre.

“I was offered so many of these horror films. I realised it’s just not for me, that particular world.”

Making To Leslie was a low-budget labour of love filmed in just 19 days, with barely enough funds to shoot a couple of takes before moving on to the next scene.

It had no money for an Oscars marketing campaign that typically costs millions of pounds but, unexpectedly, stars rallied to its aid, hosting private screenings for celebrity friends.

“We found people were starting to talk about it,” Riseborough remembers. “People were asking us: ‘Where can I see it?’”

After inhabiting an alcoholic’s skin so intensely, she admits feeling “huge gratitude” and “relief” when she completed filming.

“It’s like having swum for 20 miles and having reached a rock, just having a moment to pant and be wet,” she says. “There but for the grace of God go I.”