Meghan Markle and Prince Harry moved out of the UK in early 2020 after making the decision to step down as senior members of the royal family. At first, the Duke and Duchess moved to Canada with their son, Archie. At the time, a spokesperson for the couple shared the reason that the couple decided to spend the holidays there in 2019. “As has been reported, Their Royal Highnesses the Duke and Duchess of Sussex are spending private family time in Canada. The decision to base themselves in Canada reflects the importance of this Commonwealth country to them both,” the statement, tweeted out by journalist Omid Scobie read, in part. “They are enjoying sharing the warmth of the Canadian people and the beauty of the landscape with their young son,” the statement concluded.

In March 2020, People magazine reported that Meghan and Harry had left Canada and moved to Los Angeles. At the time, a source told the outlet that the couple was “looking at houses” in the area. According to BBC News, the duke and duchess lived in Tyler Perry’s mansion until they found a home of their own — a $14 million estate in Montecito. So, why did Meghan and Harry ultimately decide to move to Santa Barbara? Keep reading to find out. 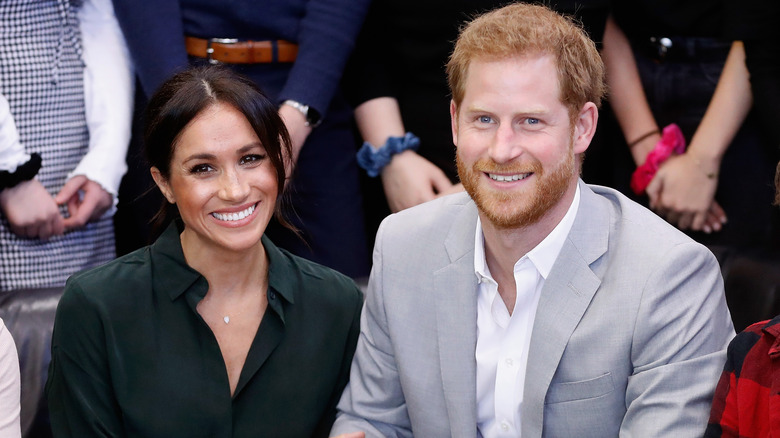 Prince Harry and Meghan Markle could have chosen to live anywhere in the world — in fact, there was even a report that the couple considered moving to New Zealand, according to People magazine — but they chose to live in Montecito. Why? The answer is quite simple. “A number of the couple’s friends, including Oprah, had recommended Santa Barbara County as the perfect place to raise a family,” reads an update in the book “Finding Freedom,” according to Marie Claire. The area also offers privacy and security — both of which are important to the Duke and Duchess of Sussex. Houses are located “within double-gated communities for maximum privacy” and are “close enough to the amenities of civilization when needed,” the excerpt from “Finding Freedom” reads.

Meghan and Harry’s abode isn’t quite a castle — but it has quite a few bells and whistles. According to Page Six, the 18,000-square-foot home “features rose gardens, century-old olive trees, a tennis court, a tea house, children’s cottage and a pool.” Royal watchers and fans got a sneak peek inside the home when Meghan shared a video of herself in her office for the 40×40 initiative in honor of her 40th birthday. Meghan and Harry appear to be enjoying their new home as they raise their two kids, Archie and Lilibet Diana, and navigate life on their own terms.