Stephen Colbert had to offer up an apology to Mindy Kaling when the former “The Office” star appeared on “The Late Show With Stephen Colbert” on July 14. Kaling happily chatted with the late night host and even opened up about becoming a mom for the second time.

Kaling jokingly told the comedian she was pretty “excited” to be in New York City and appearing on the show because she was so used to being at home with her children. “I just want to thank you for letting me be on the show. It’s just so nice,” she said.

Kaling previously confirmed on “The Late Show With Stephen Colbert” back in October 2020 that she’d secretly given birth to her second child the month prior, a son named Spencer. “I’m telling it for the first time now. It feels so strange. This is news to a lot of people,” she teased at the time. Kaling previously welcomed a daughter, Katherine, in 2017 (via People).

During her most recent appearance on the late night show, “The Mindy Project” star teased she was just happy to “get dressed up” and joked that she “got tanked” by making the most of the bar set up backstage. “I don’t have to change a diaper. I don’t have to pretend to watch ‘Daniel Tiger.’ It’s just great!” she quipped.

But while all seemed good for the majority of the interview, it ended on a bit of a controversial note. Keep scrolling to find out why.

Stephen Colbert accidentally walked in on Mindy Kaling getting dressed 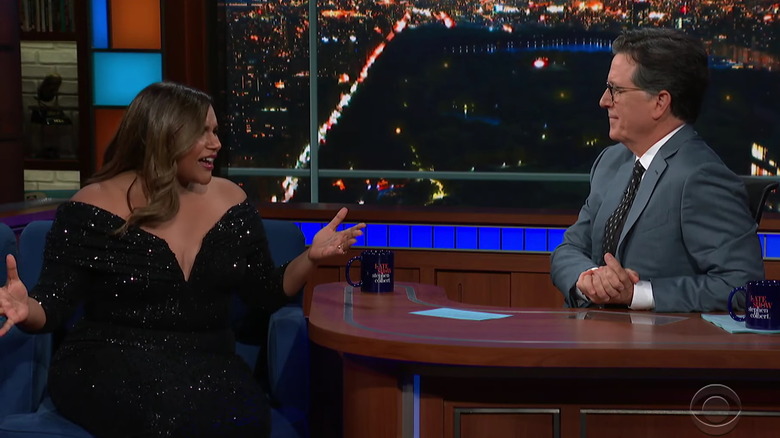 Stephen Colbert was forced to apologize to Mindy Kaling at the end of their July 14 “The Late Show With Stephen Colbert” interview after he revealed he’d accidentally walked in on her in her underwear before the show. “I didn’t know if you were going to bring it up, and I felt bad bringing this up,” Kaling responded after Colbert said sorry, explaining she “was backstage getting changed” wearing nothing but “a pair of pants and [her] bra.”

Colbert then picked up the story, admitting he doesn’t usually go to see his guests in their dressing rooms but thought it would be a good idea on this occasion. Spoiler alert. It wasn’t.

“I usually wait until the guests are in the wings, but I thought I would just go, ‘Hey, have a great show!’ So I popped the door open. I knocked, but I did that knock and pop at the same time,” he shared.

Fortunately, Kaling definitely saw the funny side of things. She quipped she just wished she’d “worn a sexier bra,” admitting she was wearing a pretty unexciting grey undergarment because she’s a busy mom.

Colbert took full responsibility for the incident, saying, “I should have knocked and waited, but your team was great. They hurled themselves in front of you like I was an assassin. I couldn’t have seen anything if I wanted to.” Still, oops!