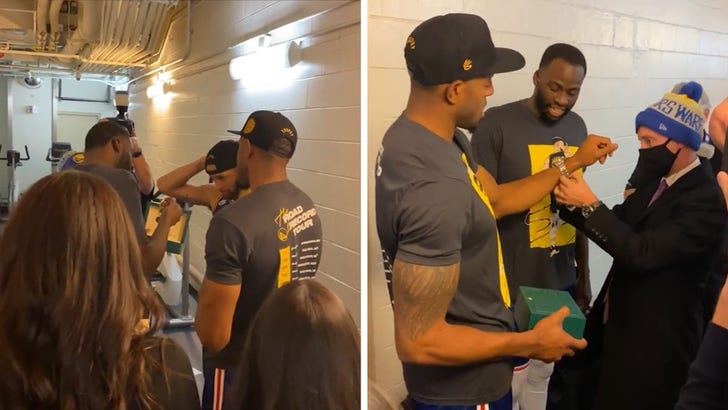 Steph Curry‘s not only the greatest 3-point shooter of all time, he’s an incredible teammate too … ’cause he gifted Draymond Green and Andre Iguodala Rolexes after he broke Ray Allen‘s record Tuesday.

The Warriors star handed over the pricey watches after he secured the NBA mark vs. the Knicks … giving his two longtime teammates a cool “thank you” gift after they had helped him succeed for so much of his career.

You can see in video from the post-game celebration, both Green and Iguodala were pumped to receive the presents in the bowels of Madison Square Garden … with Green getting an adjustment made to his new watch right on site.

Of course, Green and Iguodala have been teammates with Steph for YEARS — and have helped Steph win multiple championships, while also assisting on plenty of his 2,977 career 3-pointers as well.

According to ESPN’s Dominique Collins, Steph also got a watch made for Klay Thompson — though the other half of the Splash Brothers was not in attendance to receive it as he’s still working his way back to Golden State following his Achilles injury.

Steph, meanwhile, was still able to get in plenty of celebrating with his other teammates following the record-breaking night … with the guys dousing him in ice and water in the locker room after the win over NY.

As for the party on the court, a bunch of celebs — including Chris Rock, Spike Lee, Jon Stewart and Pete Davison — showed out to catch Curry’s big game … with Lee going all out to make sure he had memorable pics from the evening!

Jacob Elordi Raves About ‘Talented’ Ex Zendaya: ‘Such a Sweetheart’