Prince Harry appeared to be “nervous” and “uncomfortable” during his latest appearance in New York with his wife Meghan Markle, who acted as his “rock”, according to a body language expert.

To mark Nelson Mandela International Day, the Duke and Duchess of Sussex stepped out for a joint appearance on Monday to attend the United Nations’ informal meeting held by the General Assembly, which saw Harry deliver a keynote speech. While the royal has stood up in front of audiences of thousands of people in the past, Darren Stanton revealed he was particularly nervous ahead of his latest speech and his wife offered “maternal” reassurance.

One intimate moment shows the couple sitting in the audience, with Meghan holding the Duke’s hand and rubbing his arm.

Speaking to HELLO! on behalf of Slingo, Darren explained that Meghan was “putting on a brave face for both of them, smiling away yet conscious of how Harry is feeling,” which he said was evident since “her face isn’t completely engaged.” 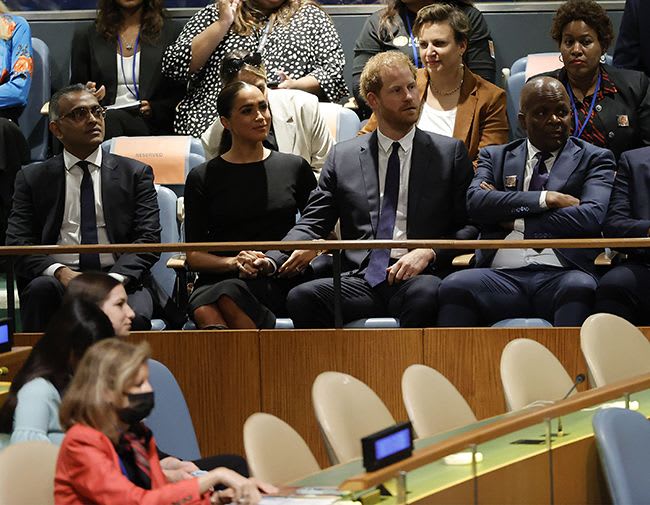 The Duchess of Sussex was spotted reassuring her husband

“As they sat together, Meghan was seen holding hands and rubbing Harry’s forearm in a maternal manner, like you may see some mothers do with a child – it’s a sign of reassurance and reflects how Meghan feels protective of her husband.

“Harry, meanwhile, appears restless and is unable to sit still – his mind preoccupied with his speech no doubt – prompting Meghan to take his arm to try and keep him relaxed and show that she is there to support him,” he added.

Darren stated Harry “appeared nervous from the outset”, which was a marked change from Meghan who was “oozing confidence” as she arrived at the UN. Speaking about Harry’s “self-reassurance gestures”, which continued throughout his speech, Darren said: “As well as holding Meghan’s hand, he was seen adjusting his jacket or tucking his hand into his side behind his jacket. 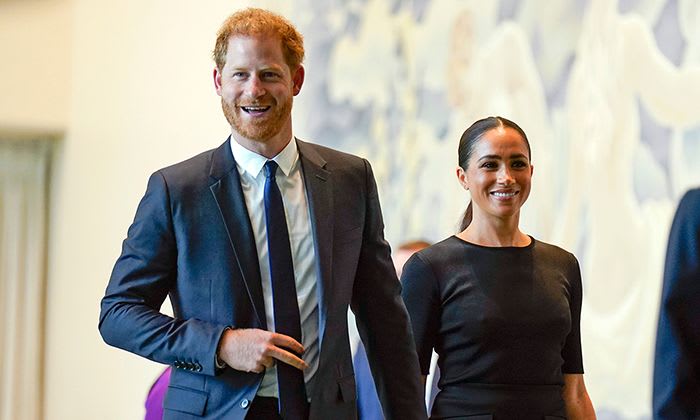 Darren pointed out that Prince Harry kept adjusting his jacket

“She, meanwhile, is used to being in the public eye and oozes confidence as she greets others and acts as a support for Harry. While Meghan can be seen smiling widely and laughing, Harry is much more reserved and displayed non-verbal gestures of feeling awkward and uncomfortable. In situations like this, he often looks to Meghan and her confidence to boost his own.”

Harry’s nerves and uneasiness did not seem to ease once he took to the stage, with Darren pointing out his “distress signals”.

“As he spoke Harry kept biting his lip, a self-reassurance gesture we make when we’re feeling anxious, and he was fidgeting with the button on his suit jacket.

“At certain points, we saw Harry display a bilateral arm shrug – an unconscious movement where your left arm moves in and out – which tends to reflect when someone is feeling uncomfortable and wanting a certain situation to be over as quickly as possible.”

However, he reportedly showed “a huge emotional shift” when he began to talk about his late mother, Princess Diana. Harry also discussed climate change and poverty, making references to Nelson Mandela’s life and legacy and what has been learnt from the late president’s struggle.

Simon Rimmer: ‘If I had my way I’d kick you off’ Sunday Brunch host tells Simon Reeve

Aerosmith Management Strikes Amazing Deal to Get Band Their Masters