Home » Celebrities » Phil Spector, revolutionary music producer who was convicted of murder in 2009, dead at 81

Phil Spector, the revolutionary music producer behind some of music’s biggest hits, died while serving time in prison at age 81.

Spector was serving a sentence for the murder of actress Lana Clarkson in 2003 at his castle-like mansion on the edge of Los Angeles. After a trial in 2009, he was given a 19 years-to-life sentence.

“His official cause of death will be determined by the medical examiner in the San Joaquin County Sheriff’s Office,” a statement from the facility reads.

Decades before his conviction, Spector had been hailed as a visionary for channeling Wagnerian ambition into the three-minute song, creating the “Wall of Sound” that merged spirited vocal harmonies with lavish orchestral arrangements to produce such pop monuments as “Da Doo Ron Ron,” “Be My Baby” and “He’s a Rebel.”

He was the rare self-conscious artist in rock’s early years and cultivated an image of mystery and power with his dark shades and impassive expression.

Tom Wolfe declared him the “first tycoon of teen.” Bruce Springsteen and Brian Wilson openly replicated his grandiose recording techniques and wide-eyed romanticism, and John Lennon called him “the greatest record producer ever.”

The secret to his sound: an overdubbed onslaught of instruments, vocals and sound effects that changed the way pop records were recorded. He called the result, “Little symphonies for the kids.”

Clarkson, star of “Barbarian Queen” and other B-movies, was found shot to death in the foyer of Spector’s mansion in the hills overlooking Alhambra, a modest suburban town on the edge of Los Angeles.

Until the actress’ death, which Spector maintained was an “accidental suicide,” few residents even knew the mansion belonged to the reclusive producer, who spent his remaining years in a prison hospital east of Stockton.

By his mid-20s his “little symphonies” had resulted in nearly two dozen hit singles and made him a millionaire. “You’ve Lost That Lovin’ Feeling,” the operatic Righteous Brothers ballad which topped the charts in 1965, has been tabulated as the song most played on radio and television — counting the many cover versions — in the 20th century. 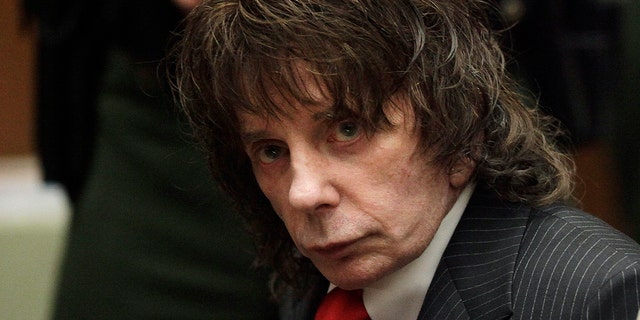 In this May 29, 2009 file photo, music producer Phil Spector sits in a courtroom for his sentencing in Los Angeles.
(AP Photo/Jae C. Hong, Pool, File)

But thanks in part to the arrival of the Beatles, his chart success would soon fade. When “River Deep-Mountain High,” an aptly-named 1966 release that featured Tina Turner, failed to catch on, Spector shut down his record label and withdrew from the business for three years. He would go on to produce the Beatles and Lennon among others, but he was now serving the artists, instead of the other way around.

In 1969, Spector was called in to salvage the Beatles’ “Let It Be” album, a troubled “back to basics” production marked by dissension within the band. Although Lennon praised Spector’s work, bandmate Paul McCartney was enraged, especially when Spector added strings and a choir to McCartney’s “The Long and Winding Road.” Years later, McCartney would oversee a remastered “Let it Be,” removing Spector’s contributions.

He would later tell friends Clarkson had shot herself. The case was fraught with mystery, and it took authorities a year to file charges. In the meantime, Spector remained free on $1 million bail.

When he was finally indicted for murder, he lashed out at authorities, angrily telling reporters: “The actions of the Hitler-like DA and his storm trooper henchmen are reprehensible, unconscionable and despicable.”

As a defendant, his eccentricity took center stage. He would arrive in court for pretrial hearings in theatrical outfits, usually featuring high-heeled boots, frock coats and wildly styled wigs. He arrived at one hearing in a chauffeur-driven stretch Hummer.

Once the 2007 trial began, however, he toned down his attire. It ended in a 10-2 deadlock leaning toward conviction. His defense had argued that the actress, despondent about her fading career, shot herself through the mouth. A retrial got underway in October 2008.

Harvey Phillip Spector, in his mid-60s when he was charged with murder, had been born on Dec. 26, 1939, in New York City’s borough of the Bronx. Bernard Spector, his father, was an ironworker. His mother, Bertha, was a seamstress. In 1947, Spector’s father committed suicide because of family indebtedness, an event that would shape his son’s life in many ways. 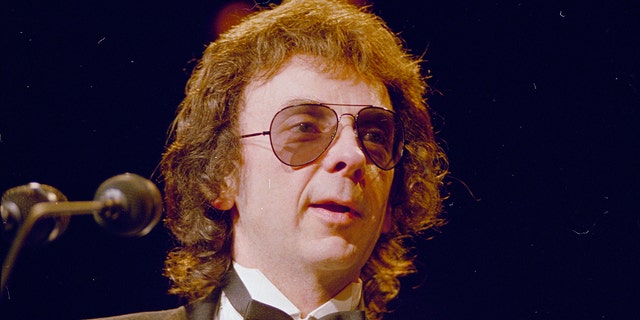 Four years later, Spector’s mother moved the family to Los Angeles, where Phil attended Fairfax High School, located in a largely Jewish neighborhood on the edge of Hollywood. For decades the school has been a source of future musical talent. At Fairfax, Spector performed in talent shows and formed a group called the Teddy Bears with friends.

He was reserved and insecure, but his musical abilities were obvious. He had perfect pitch and easily learned to play several instruments. He was just 17 when his group recorded its first hit single, a romantic ballad written and produced by Spector that would become a pop classic: “To Know Him is to Love Him,” was inspired by the inscription on his father’s tombstone.

A short, skinny kid with big dreams and growing demons, Spector went on to attend the University of California, Los Angeles for a year before dropping out to return to New York. He briefly considered becoming a French interpreter at the United Nations before falling in with the musicians at New York’s celebrated Brill Building. The Broadway edifice was then at the heart of popular music’s Tin Pan Alley, where writers, composers, singers and musicians turned out hit songs.

He began working with star composers Jerry Leiber and Mike Stoller, who had met at Fairfax High a few years before Spector arrived. Ultimately, he found his niche in producing. During this period he also co-wrote the hit song, “Spanish Harlem,” with Ben E. King, and played lead guitar on the Drifters’ “On Broadway.”

“I had come back to New York from California where there were all these green lawns and trees, and there was just this poverty and decay in Harlem,” he would recall later. “The song was an expression of hope and faith in the young people of Harlem … that there would be better times ahead.”

For a time he had his own production company, Philles Records, with partner Lester Silles, where he developed his signature sound. He assembled such respected studio musicians as arranger Jack Nitzsche, guitarist Tommy Tedesco, pianist Leon Russell and drummer Hal Blaine, and gave early breaks to Glen Campbell, Sonny Bono and Bono’s future wife, Cher.

In the early 1960s, he had hit after hit and one notable flop: the album “A Christmas Gift to You,” released, tragically, on Nov. 22, 1963, the day President Kennedy was assassinated, the worst possible time for such a joyous record. “A Christmas Gift,” featuring the Ronettes singing “Frosty the Snowman” and Love’s version of “White Christmas,” is now considered a classic and a perennial radio favorite during the holiday season.

Spector’s domestic life, along with his career, eventually came apart. After his first marriage, to Annette Merar, broke up, Ronettes leader singer Ronnie Bennett became his girlfriend and muse. He married her in 1968 and they adopted three children. But she divorced him after six years, claiming in a memoir that he held her prisoner in their mansion, where she said he kept a gold coffin in the basement and told her he would kill her and put her in it if she ever tried to leave him.

When the Ronettes were inducted into the Rock and Roll Hall of Fame in 2007, Spector sent along his congratulations. But in an acceptance speech by his ex-wife, she never mentioned him while thanking numerous other people.

Darlene Love also feuded with him, accusing Spector of failing to credit her for her vocals on “He’s a Rebel” and other songs, but she did praise him when inducted into the Hall.

Spector himself became a Hall member in 1989. As his marriages deteriorated, recording artists also began to quit working with Spector and musical styles passed him by.

He preferred singles to albums, calling the latter, “Two hits and 10 pieces of junk.” He initially refused to record his music in multichannel stereo, claiming the process damaged the sound. A Spector box set retrospective was called “Back to Mono.”

By the mid-1970s, Spector had largely retreated from the music business. He would emerge occasionally to work on special projects, including Leonard Cohen’s album, “Death of a Ladies’ Man” and The Ramones’ “End of the Century.” Both were marred by reports of Spector’s instability.

In 1973, Lennon worked on an album of rock ‘n roll oldies with Spector, only to have Spector disappear with the tapes. The finished work, “Rock ‘n’ Roll,” didn’t come out until 1975.

In 1982 Spector married Janis Lynn Zavala and the couple had twins, Nicole and Phillip Jr. The boy died at age 10 of leukemia.

Six months before his first murder trial began, Spector married Rachelle Short, a 26-year-old singer and actress who accompanied him to court every day. He filed for divorce in 2016.

In a 2005 court deposition, he testified that he had been on medication for manic depression for eight years.

“No sleep, depression, mood changes, mood swings, hard to live with, hard to concentrate, just hard — a hard time getting through life,” he said. “I’ve been called a genius and I think a genius is not there all the time and has borderline insanity.”