With his debut feature On-Gaku: Our Sound, Kenji Iwaisawa looked to “pursue a new expression” in animation, through the juxtaposition of offbeat characters and deadpan atmosphere not often found in the medium.

Based on a manga created by Hiroyuki Ôhashi, On-Gaku follows three delinquent teenagers as they set out to form a band. Culminating in an emotional scene involving live performance, the rest of the film was fashioned to be as muted and simple as possible, for reasons related to both story and budget. 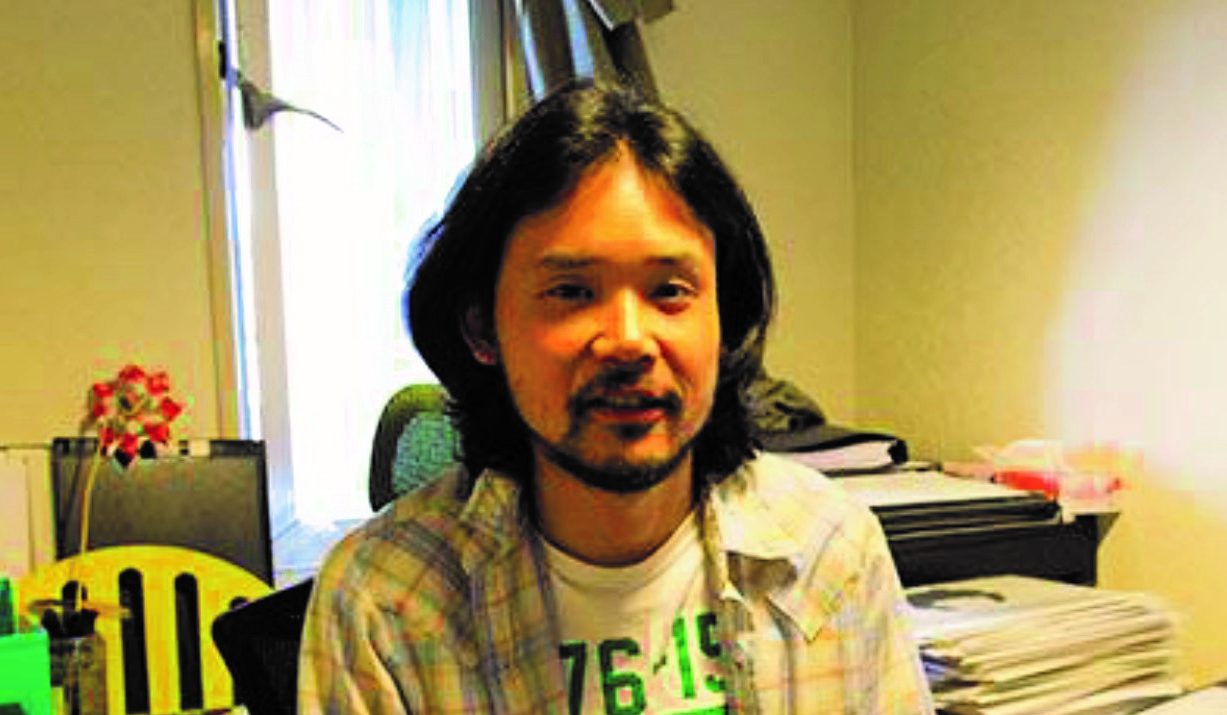 In conversation with Deadline, Iwaisawa details the musical and visual influences behind his indie passion project, the rotoscoping involved in creating it, and a scene he’s particularly proud of, that he feels had “never [been] seen before in the history of anime.”

DEADLINE: How did you come to awareness of the works of Hiroyuki Ôhashi?

KENJI IWAISAWA: After I met and became friends with Mr. Ôhashi at a part-time job, I read his manga. On-Gaku was one of them, and I enjoyed it immediately.

DEADLINE: What about On-Gaku resonated with you, and what was the process like, in scripting your film adaptation?

IWAISAWA: When you think about a story about high school students starting a band, you tend to think about a youthful tale involving friendship, love, or struggles. But On-Gaku didn’t have any of those obvious elements, which is why I especially enjoyed the story.

I didn’t write a screenplay. Instead, I went directly to storyboarding based on the manga.

DEADLINE: What steps did you go through in bringing the film to life, after storyboarding it? How closely did you stick to the aesthetics of Ôhashi’s manga? 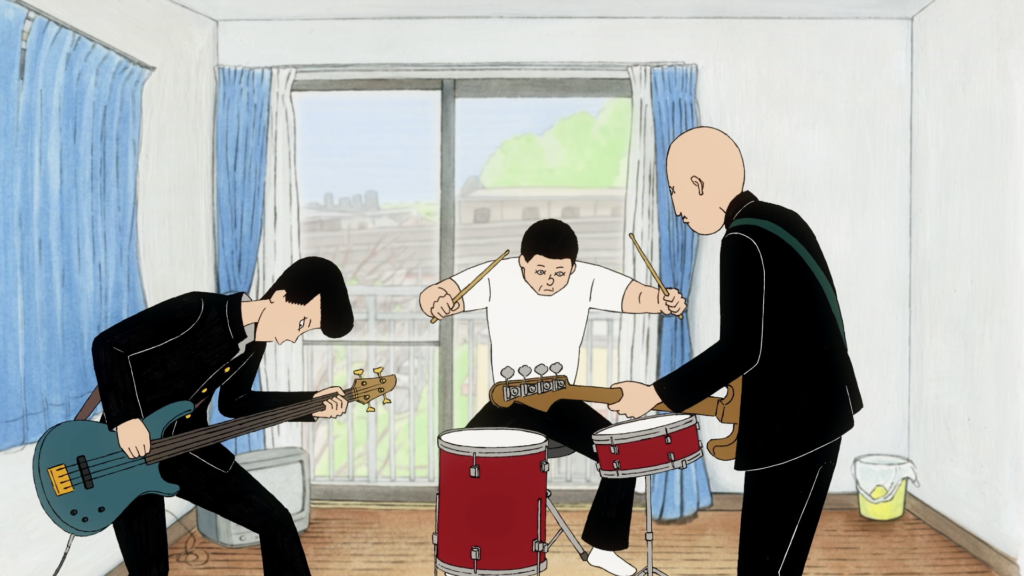 DEADLINE: Were there other visual or musical inspirations that you brought into the film?

IWAISAWA: Direction-wise, I was influenced by Takeshi Kitano and Aki Kaurismaki. I think you can see that in the long beats, the wide shots, and the expressionless protagonist. Music-wise, I like ’70s rock, so there are a few scenes where I’ve incorporated that element into my visuals and songs.

DEADLINE: How did you work with your team to craft original songs for the film?

IWAISAWA: I had clear ideas of what I wanted the songs to be like, so I conveyed that to the musicians. When they came back with the songs, they required almost zero fixes. They matched what I had in mind, so the process was smooth.

DEADLINE: What were the biggest challenges in making your first feature? 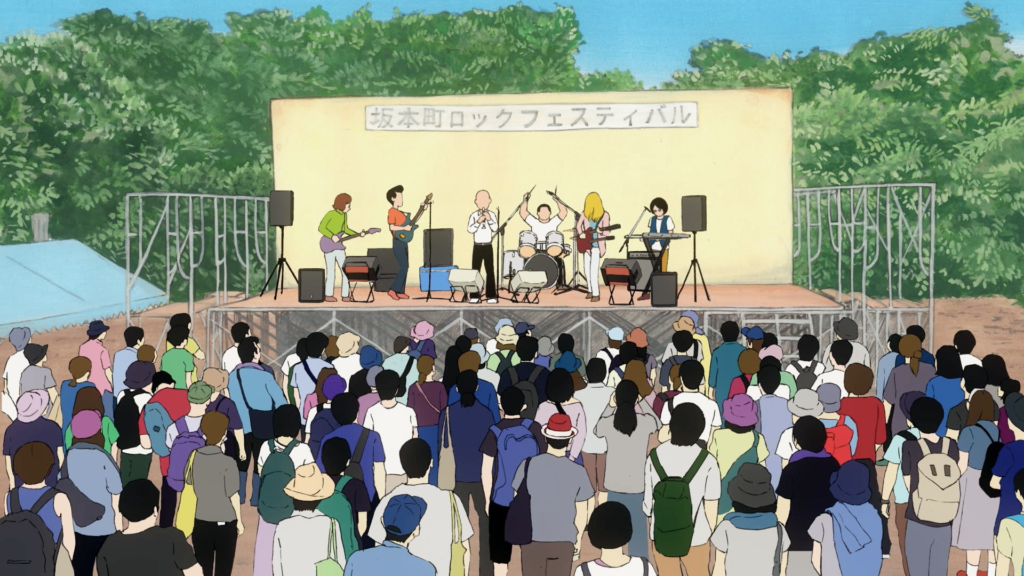 IWAISAWA: There were many challenges. Animation production usually incorporates a division of labor, with many people in charge of the small sections they are assigned. But this film was made with almost everyone being inexperienced. So in many cases, I had to show them how each process was done, simultaneously editing what they did, and also [directing]. Having to do everything single-handedly was especially challenging. I learned that there is a limit to what I can do alone and that an animated feature is done best with division of labor. [Laughs]

DEADLINE: Which sequence did you find most difficult to animate?

IWAISAWA: The live sequence at the end was challenging. But I was also convinced that I was making a scene never seen before in the history of anime, so I was in high spirits while working on it.

DEADLINE: What were the highlights of your experience making the film? What are you most proud of, looking back at it now?

IWAISAWA: During production, many people thought that I wouldn’t be able to complete this project. Not only did I finish it, but the film has also been shown outside of Japan, especially in North America, and I am proud of that. Also, I am taking away the fact that many people saw this film even though it was financed independently, and I realized that there is still a lot of potential for animation.

DEADLINE: What do you hope viewers will take away from the film?

IWAISAWA: Though it is animated, I want the audience to enjoy it as a simple comedy. Also, I’d be happy if they can dance to the beat of the live performance at the end.

DEADLINE: What’s next for you?

IWAISAWA: I haven’t started anything concretely, but I am preparing to make another animated feature with a different approach from On-Gaku. I feel that it will be a new challenge, but this time I will try not to make everyone wait so long to see it!

Armie Hammer's Mother Told His Ex He 'Has Demonic Behaviors' – And Paige Lorenz Reveals How He Marked Her!

This is why Bachelorette alum Hannah Brown relates to Meghan Markle