Love Island star Jack Fincham has hit out at panic buyers swiping all the petrol amid the fuel crisis, branding it ‘a liberty’.

Around 90% of independent petrol stations across the country have been emptied dry with motorists filling up their tanks, ironically in fear of a shortage.

It’s impacted reality star Jack, who said he was unable to go to work due to the lack of petrol in his car.

In his Instagram stories, he ranted on Sunday: ‘All these panic buyers, panic buying petrol yesterday, I seen so many queues yesterday and I thought to myself “I ain’t queuing in that”.

‘Now I can’t get no petrol so I’m stuck! It’s a liberty man. What is going on with the world? It’s like the apocalypse.’ 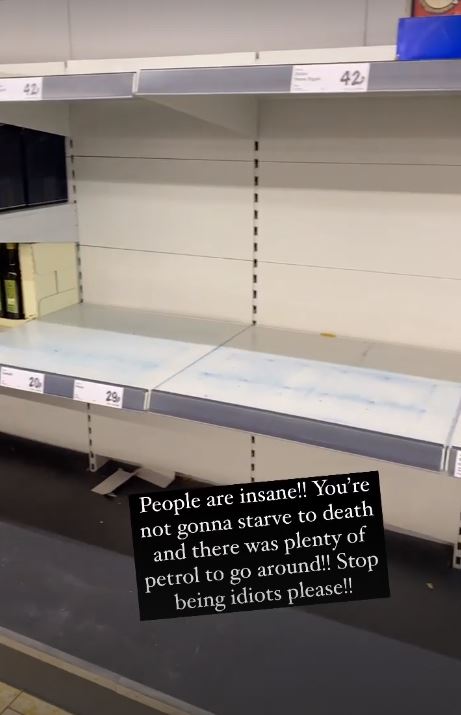 Recalling the early days of the Covid pandemic, when panic buyers stripped supermarket shelves, Jack added: ‘It was the same thing with toilet roll, how many s***s do you have?’

Jack’s not the only star complaining about the current spate of panic buying as Married At First Sight UK star Amy revealed her frustration with the empty shelves in her local supermarket.

Filming the bare aisles in what appeared to be Lidl, Amy Christophers said in her Instagram stories: ‘Oh my God, first the petrol, now the bloody pasta again. What the hell is going on?’

She added in the caption: ‘People are insane!! You’re not gonna starve to death and there was plenty of petrol to go around!! Stop being idiots please.’

Prime Minister Boris Johnson’s Government has insisted there is enough fuel to go around and has appealed for calm.

The PM’s official spokesperson said: ‘We have ample fuel stocks in this country – the public should continue to be reassured there are no shortages.

‘We’ll continue to work closely with the industry to take action where there is pressure on petrol stations.’