Bordered by the West Gate Freeway on one side and a derelict textile factory on the other, McIvor Reserve in Yarraville stands out as one of the few pieces of large open parkland in Melbourne’s western suburbs.

The park is used for recreational sport, dog walking and as a playground for kids. However, residents are concerned that part of their valuable green space will soon be lost if it is chosen as the location for a future indoor sports stadium. 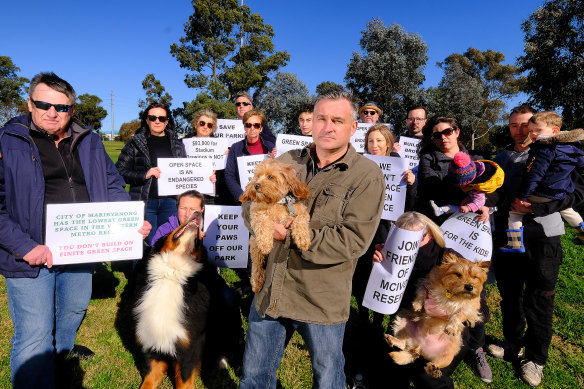 Yarraville residents fear an off-leash dog exercise area in the McIvor Reserve will be chosen by Maribyrnong City Council as the preferred location for an indoor sports stadium. Credit:Luis Ascui

Locals are opposing a proposal to build a new arena at McIvor Reserve as part of Maribyrnong City Council’s intention to deliver 12 indoor ball courts in the western suburbs.

The council has informed households that it is investigating future upgrades to the park and is due to deliver a proposed master plan next month. Some fear it will include a new basketball and netball stadium that will cut down land open to the public.

Residents claim that the consultation process run by the council has not been transparent, as there are no clear plans for how big the proposed sporting facility will be or which part of McIvor Reserve would be used.

Their main concern is that the off-leash dog exercise area on the park’s western boundary will be chosen as the council’s preferred location for the stadium.

Shari Liby, from the Friends of McIvor Reserve community group, said there was a growing opposition among residents to the proposal as the western suburbs already had a lack of open space.

She said that the upcoming development of the disused 26-hectare Bradmill factory site neighbouring the park – which has a proposed 1000 new dwellings – meant that more open area was needed for residents, not less.

Liby said the council’s stadium strategy indicated the facility could have as many as six courts and 320 car parks. She said a stadium of that size would take up about 14,000 square metres of space, about the size of 30 house blocks.

“That’s how much of the park would be gone. And there’s really just not much actual parkland that’s left there,” she said.

The council has said that an indoor stadium at McIvor Reserve was only “an idea, not a proposal” and that it was gathering feedback from people who use the park before making any further decisions.

At a council meeting this week, Maribyrnong City chief executive Celia Haddock said no determination had been made on the stadium’s design or location.

“I again reiterate that no decision has been made on McIvor Reserve. Council is simply investigating it as an option,” she said.

However, Liby said that she believed there was more going on behind the scenes than the council was willing to reveal.

She highlighted opposition to plans for Melbourne Victory to build a soccer academy at Footscray Park and the Yarraville “Arab Spring” parking meter saga as other examples of poor consultation by the council.

“They are not high schoolers that are cramming for an exam that are going to pull it out in the last moment,” she said.

“They’re not being transparent about so many things, which leaves the community with very little confidence that they’re being forthcoming with us about what’s really going on.”

Barbara Hart, who has lived in a house overlooking the park for 16 years, said she was concerned.

“Why aren’t they looking at disused industrial sites in the area? There’s a lot of them and the council could be looking to purchasing that sort of land,” she said.

“We all acknowledge that there needs to be more basketball and netball courts, but not at the expense of green open space.”

Another resident, Kylie Michel, said the COVID-19 lockdowns had demonstrated the importance of having open space close to where you live.

She said the western suburbs were often identified as an area with a shortage of tree cover and green space.

“It’s such a beautiful space, but we know once it’s taken away, it can be lost forever,” she said.

An online community forum to discuss the McIvor Reserve master plan will be held by Maribyrnong City Council on August 8.

Coronavirus patient on hellish ordeal: ‘I was screaming for mercy and praying to God’