Lil Wayne and Denise Bidot seem to be on again four months after their split, and now they might be engaged, as  Weezy wrote a tweet about ‘today is the beginning of our forever.’

Lil Wayne and girlfriend Denise Bidot seem to have made up following their Jan. 2021 split with a possible engagement. The 38-year-old rapper tweeted on Apr. 20, 2021 the cryptic message, “Happiest man alive! Today is the beginning of our forever. Forever?? Forever, ever?? FOREVER EVER!!!!! The Carters,” as Wayne’s full name is  Dwayne Michael Carter Jr. Not to be confused of course with the most famous power couple also known as The Carters, which is Jay Z and Beyoncé .

Wayne’s tweet sure made it seem like Denise made him the “happiest man alive” by agreeing to marry him. Weezy just hinted about a reunion with an Apr. 14 Instagram stories video of Denise, 34, kneeling in the sand near the ocean. She wrote their names in the sand and drew a big heart around them and a smaller heard connecting their monikers. The brunette beauty then blew a kiss to the camera.

So far Weezy hasn’t posted anything to his Instagram yet about getting engaged to Denise. Instead, he’s been using the date of 4/20 to promote his new GKUA Ultra Premium weed products line with his Mr. Carter OG strain. Wayne even shared the big news that he’ll be teaming up with his marijuana company to put on a series of summer concerts now that COVID-19 restrictions are being lifted, featuring an Aug. 13 show at L.A.’s Coliseum with his Young Money crew. 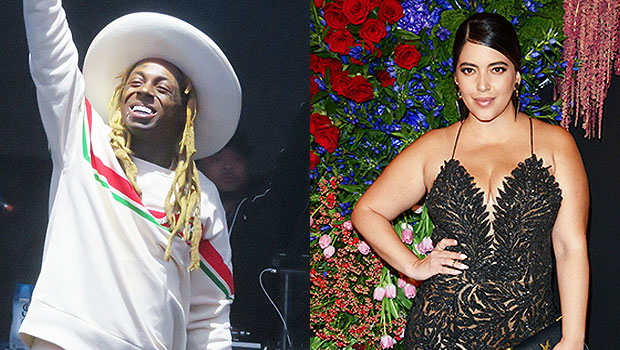 Wayne and Denise began dating over the summer of 2020, but split up briefly following the “Lollipop” rapper giving Donald Trump a last minute presidential endorsement on Oct. 29, 2020. Wayne even posed with then then-POTUS for a photo and tweeted, “Just had a great meeting with @realdonaldtrump besides what he’s done so far with criminal reform, the platinum plan is going to give the community real ownership. He listened to what we had to say today and assured he will and can get it done.”

Denise then deleted all of her photos with Weezy, and later disabled her entire Instagram account altogether in an apparent split. She tweeted in frustration on Nov. 2, “Wow…can this year be over already.” But the pair was back together by Thanksgiving, when Wayne whisked Denise away on a romantic vacation. The two then rang in 2021 together, smiling in an IG selfie with fireworks going off behind them.

But the reunion proved short lived, as on Jan. 5, Wayne and Denise unfollowed each other on Instagram. She then shared a cryptic message that read “Pretty disappointing when you defend someone throughout everything and they turn out being just as sh*tty as everyone said they were,” without naming Weezy directly. But his post of her drawing their name in the sand with a heart sure made it seem like the two had made up again….and now six days later, Wayne is talking about “the beginning of our forever.” We’ll have to wait to see if he ends up posting a photo alongside Denise, or better yet, a photo of the model showing off some major ice on her left ring finger!